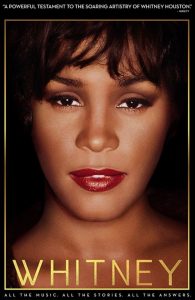 A newsreader says of Whitney early in her career “it’ll take an act of Congress to keep this woman from becoming a megastar”.

It’s easy to think in retrospect that a famous and ultimately tragic figure followed an immutable trajectory upwards to huge success before spiralling down to disaster; but that often only serves to make empty vessels of complex people, to satisfy our emotional feeding frenzies.

And this film, while adding clarity to many of the rumours that swirled around Whitney Houston during her remarkable career, also highlights how someone can be pulled this way and that in life and death by other people, however well-meaning.

There are some extraordinary moments in Whitney.

The revelation that the singer was sexually abused by a female relative is one. Her ex-husband Bobby Brown’s insistent and bizarre claim that drugs had nothing to do with Whitney’s life story is also particularly gobsmacking.

Kevin Macdonald’s documentary traces her drug-induced decline from the weed her brother shared with her, via repeated failed rehab attempts and car crash interviews about her addiction, to her death from drowning in a hotel bath in 2012 (Bobby Brown, it turns out, was a “lightweight” compared to Whitney where drugs were concerned).

But Whitney Houston was music, and I defy you to come out and not start downloading her Greatest Hits.

Thankfully, Macdonald never takes us far from that extraordinary, revelatory voice: In Newark’s New Hope Baptist Church where she worshipped and sang; her sweet yet powerful first TV appearance; concerts in post-apartheid South Africa; stage performances from the height of her success.

The Houston family features heavily. They seem close-knit but troubled, and we watch them trying to rewrite history, or bite back at a question, sometimes painfully self-aware about what they are doing.

Her mother, the singer Cissy Houston, was thorough in the musical training she gave the young Whitney. Her work meant her daughter could bring both artistry and technical skill to her performances. But Whitney’s upbringing meant that she was unable to cope with what came with success.

There are several factors put forward for this. The children were often looked after by different relatives and friends while Cissy toured. Their father John was a civil servant in a corrupt local administration. Often unfaithful, he tapped the family phone so he could keep tabs on his wife, and their divorce when Whitney was a teenager had a huge effect on her. Once she hit the big time, several family members were added to her payroll, paid for doing nothing much. The abuse, according to Whitney’s assistant Mary Jones, left Whitney confused about her sexuality. It’s certainly clear the singer’s relationship with best friend Robyn Crawford, a lesbian, pulled her in different directions. Her public wanted her to go out with men, and some of Whitney’s family loathed Robyn.

Witney’s preparation for the charts was steady and clear-sighted. Two record companies bid for her, and she eventually signed with Arista. It’s strange hearing that interest initially had to be drummed up; the charts were not then fertile soil for a woman with just a mic, a light and a voice, however powerful.

Her marriage to Brown – meeting at the Soul Train awards ceremony the night she was booed, ending in divorce 14 years later – is a salutary, and depressingly familiar, tale.

She was more successful yet had to boost his ego (changing the name of her film production company to include his name) and put up with years of appalling behaviour.

The other victim was their daughter Bobbi Krystina, known as Krissy. Joining her mother on the road and on stage, little Krissy looks wide-eyed but entirely resigned while her mother does what looks like performance parenting. Whitney’s death at 48 is tragedy enough; Krissy’s death a few years later in scarily similar circumstances, aged only 22, is a devastating example of how the dark side of success can affect those around the star.

The film covers not just some of the highs of Houston’s life (singing The Star Spangled Banner at the 1991 Superbowl and the fans’ reaction afterwards, the huge worldwide success of the film The Bodyguard, with Kevin Costner) but the lows: that interview with Diane Sawyer where Houston had to explain away her emaciated appearance, repeated rehabs, and her disastrous comeback tour.

Macdonald’s film is more than just a chronology of her life and a showcase of her talent; it also tries to put her life in context, though fittingly it’s done in a rather 80s manner. Footage of her singing is cut with scenes of the Newark riots in the 60s (Whitney and her family lived in Newark for the first years of her life), along with iconic images from the decades: Ronald Reagan, Princess Di, Tiananmen Square. It’s like a visual version of Billy Joel’s 1989 song We Didn’t Start The Fire.

Her relationship with the black community was also complex. She was bullied as a child for her light skin. Artistically she was accused of letting down black audiences – Rev Al Shapton famously called her Whitey Houston.

Whitney feels overlong at times, and I didn’t come away feeling I really understood how her story fits into an overall picture.

Of course, while it charts and gives meaning to her rise and fall (the external influences, and her own beliefs and agency, are all there) we can never really know the truth. We all curate our interactions with other people when we recount them, or simply remember incidents in different ways.

But it’s genuinely absorbing. The interviews with family, friends and music industry people are fascinating, for their contradictions and their admissions as much as their memories. The home movie footage adds an authenticity and enormous vibrancy: Whitney being prepped for the stage, Whitney singing for her friends, Whitney mucking around, laughing in her brightly cluttered kitchen.

We later see her extraordinary curved glass house as it is now, without her; cold and calm with its palette of grey and cream and shiny silver, thick untouched snow outside.

Eerie and empty, without the talented and beautiful, messy and troubled, lively and funny, Whitney Houston.