You are here: Home / Film Reviews / War For The Planet Of The Apes (3D) 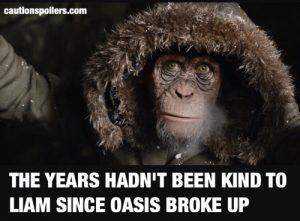 As if we didn’t need reminding, mankind’s hubris will be our downfall, nature will find a way, and oh karma’s a bitch.

War For The Planet Of The Apes starts with an attack as a battalion of human soldiers sent by the vicious and desperate General (Woody Harrelson) come for Caesar (Andy Serkis) and his family in their woodland home. Some men are captured, but spared, to pass on a message – hell, they are the message – to their human leader. But after another onslaught breaches the safety of their waterfall-hidden catacombs, with apes slaughtered and family groups torn apart, Caesar resolves to move everyone away across the desert, to find somewhere where they’ll be safe from the last angry remnants of human society.

But while the other apes prepare to leave Caesar has a personal battle he needs to fight, and resolves to travel alone to find the General, a merciless man with both humans and traitorous apes in support. And in a movie about who is civilised and who barbarous, it’s no surprise that the ape leader is forced to confront what he may be turning into.

Naturally he isn’t allowed to go alone and soon he and his small band – Maurice (Karin Konoval), Luca (Michael Adamthwaite), and Rocket (Terry Notary) – are on their way to an old quarantine facility where the General is holed up. En route they come across a mute girl (Amiah Miller), who Maurice – in a performance of achingly touching fatherliness – insists be taken with them as they continue their journey, as she’ll die if left alone.

The Colonel’s camp when they find it is brutal with no room for compassion, despite Caesar reminding him “I showed you mercy when I spared your men. I offered you peace”.  At a meeting between the Colonel and Caesar the former is forced to admit his admiration for his enemy’s intelligence but all that does is reinforce the man’s belief that there can be only one winner in this battle for the planet.  The Colonel inspires a cult-like devotion, which isn’t surprising when you think of the carnage and mayhem the remaining humans must have seen. He may be utterly merciless but he’s desperate and really doesn’t know any other way to survive.

Unsurprisingly when you get two charismatic leaders and an apocalypse there will be a lot of biblical analogies. Caesar has more than one dark night of the soul – in fact he has a whole series of them. When he reaches the General’s camp he finds apes enslaved, staggering under huge rocks, without food and water, building a wall for the humans; and of course the whole story is about whether they can ever reach their promised land. And did I mention the crucifixions? Like the Bible this movie isn’t for the faint-hearted.

But there is lightness too. Chimpanzee Bad Ape (Steve Zahn), a loner so named because he learnt to speak listening to how his human captors in the Sierra Zoo spoke to him, is far from bad. They come across him before they reach the Colonel’s stronghold – initially irritating, he turns out to be an adorable addition to a stormy, snow covered, dark story. Bad Ape is quirky, funny, and frankly not terribly brave – but he is very kind, and he looks hilarious bouncing along in a blue sleeveless bodywarmer and a bobble hat. It wouldn’t have surprised me if he’d dug out a slightly sticky bag of Werther’s Originals to keep everyone going.

The dialogue is a mixture of English and sign language – paradoxically as the apes start to learn to speak, humans are losing that power, thanks to virus mutations that threaten to wipe people out once and for all. This actually works extremely well (the sign language, not the apocalyptic virus second wave) as it’s easy to work out what’s going on. I’ve lost count of the times I’ve been left clueless in a film as I just couldn’t hear the mumbly speeches.

The cinematography is breathtaking in scale and beauty. The golden caramel light as the apes gallop along a sandy beach is simply stunning (and next up: Rise of The Planet Of The Ponies).

The motion capture of the ape characters is so extraordinarily good I found myself wondering how they trained all those animals. Serkis puts in a gobsmacking performance of depth and grace, and if he doesn’t get an Oscar nod we should all rise up.

The cast list is light on women, though I’m more bothered by the lack of actual human female characters. Men are more likely to be fighters in war but in a struggle for humanity’s survival wouldn’t the women be needed too? And even if they aren’t in combat, wherever you have soldiers you have women. (And before anyone says it’s because of the inhospitable location, northern women don’t even need coats.)

War For The Planet Of The Apes is very long. Slightly too long. And while it’s a terrific film but they could have cut 15 minutes – the action inside the General’s camp drags a bit.

Weirdly after hearing so many good things about the film, initially I didn’t find myself particularly invested in it (possibly because Caesar’s hard trek through snowy forests reminded me of The Revenant, one of my least favourite films – don’t email me, it came out two years ago and we’ve all moved on). I’ll usually cry at anything involving a baby or child, furry or not, but here it was a gradual process. Though by the end watching reunited ape families certainly had me sniffing.

And with enough closure for everyone without descending into triteness, overall this is a brilliant ending to the trilogy (if it is the end).