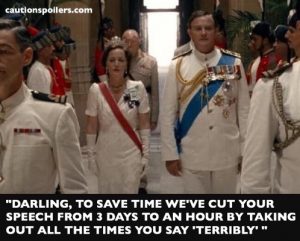 Gillian Anderson as Lady Mountbatten, last Vicereine of India, does that peculiar shoulder-slouching thing all through Viceroy’s House in the manner of members of the British upper classes who are rather embarrassed by their extreme privilege.

This is not a criticism by the way – Anderson is brilliant as the terribly clipped, terribly rich Edwina who nonetheless genuinely tries to make a difference to the lives of people in India as her husband Lord Mountbatten, last Viceroy of India, negotiates with British and Indian politicians trying to find the fairest way to hand the country over to its people.

In Gurinder Chadha’s highly personal film about the run up to Partition between India and Pakistan in 1947 we see Edwina first massively increase the numbers of Indians invited to Viceroy House events, then request more Indian food from her chefs for these guests, and – as Partition pushes families into exile – working tirelessly with refugees to ensure they have food, water and healthcare. (Indeed Mountbatten described Edwina as an idealist and a lefty, while he is “more of a military man”.)

Lord and Lady Mountbatten have been sent to India along with their adult daughter Pamela and their pet dog. “Dickie” Mountbatten tries to broker a deal as arguments rage between high ranking British officials and Indian leaders (particularly Nehru, Jinnah and Gandhi) as to what is the best way to secure a safe future for India’s people: via one united country with safeguards in place for the one in four Muslim minority; or via Partition, dividing the country up to create a majority Sikh and Hindu India and a majority Muslim Pakistan.

Hugh Bonneville’s Mountbatten is very likeable (a man who “could charm a vulture off a corpse” we are told), witty and clearly capable – somehow I can’t imagine Brexit being achieved in the five weeks they give themselves to divide up a vast nation, the timeframe already brought forward by a day to satisfy the astrologers. As the process continues though he is stabbed in the back by the political ghost of Churchill himself as Jinnah (Denzil Smith), head of the Muslim League, ends up with what he always wanted but was seen as politically impossible not long before – Partition.

And when it comes to the dividing up you can see why it was seen as so difficult and also why they went ahead anyway: “As you can see there are no straight lines in India” says Lord “Pug” Ismay (Michael Gambon) as they examine the plan that Churchill had promised secretly to Jinnah years before but which is also designed to push back against the Soviets and protect British access to oil.

While the Viceroy’s House itself is calm and well run with huge numbers of Indian staff from secretaries to valets to chefs, unrest and violence are erupting around the country. Dickie struggles to even get the different leaders to meet together, and the British Governors of the different provinces declare themselves unable to maintain safety. Soon tensions spill over among the staff and even within the house the British have difficulty maintaining order (“worse than Glasgow on a Saturday night” is how a Scottish civil servant describes it when he is slapped across the face).

There are other, more personal stories threaded through this large scale history lesson including a love story between Mountbatten’s Hindu valet Jeet (Manish Dayal), and Muslim secretary Aalia (Huma Qureshi). While touching at times it can seem rather forced, though Jeet is a really interesting character. Young and political, he thinks nothing of dropping comments into conversations with the highest ranking British officials about India regaining her freedom and he is upfront that his career as a prison guard came to an end as he could no longer countenance locking up political prisoners.

The actual dividing up of the contents of the house between India and Pakistan (in 80/20 proportions) is extraordinary – as musical instruments are allocated and in the library two women argue over who gets to keep the Brontes and the Austens. And then after the handover celebrations, the biggest mass migration in history begins with 14 million Sikhs, Hindus and Muslims criss-crossing the land as they try to get to India or Pakistan. Cholera is rife in refugee camps and violence and illness claim one million lives.

The first third of the film is surprisingly witty (though as the political situation deteriorates that tails off for understandable reasons). There’s a lovely scene where the newly-arrived Mountbatten is training his new valets to help him dress – under two minutes is the aim, with a rather woeful 13 minutes their first attempt, despite the delightful ease with which his trousers do up now they have newfangled zips in them rather than buttons. British voices are clipped and most of the Indian leaders had been educated or trained in the UK. Many lines seem like quotes though that could just be the way posh Brits making history tend to talk, as they think everything they say is terribly, terribly important.

The house itself looks ravishing. Stunning, with long corridors and beautifully decorated rooms that mimic English country houses despite the seering heat. All the staff are dressed in white, with the men having red bibs and the women orange scarves. Edwina and Dickie are the epitome of 1940s upper class style and Edwina’s amazingly rolled hair stays in place throughout everything (I began to suspect it had been created from Bakelite, the new wonder material).

The film does drag slightly in the middle. The last third picks up speed massively with the human ramifications of Partition movingly displayed, although the love story between Jeet and Aalia becomes rather melodramatic. And despite the historical complexities the story has of course been massively simplified. There is no depiction of Edwina’s rumoured platonic affair with Nehru that Dickie gallantly turned a blind eye to (along with her many other affairs, apparently) and you can see why it would be a distraction to include it.

The performances are excellent and the physical likeness between the actors and their real life counterparts (we see original film footage at the end) is uncanny – particularly Edwina, Jinnah, and Nehru. (Bonneville is terrific as Mountbatten but looks nothing like the patrician-looking real-life earl.)

If you know nothing about Partition and the history of the British Raj in India that doesn’t matter – the story is clearly set out and everything happens in a linear way. And although the exposition can be rather clunky (via important discussions between important people about the unfolding situation, often overheard by less important people who then discuss them with other less important people) it is quite helpful.

If you do see Viceroy’s House please stay on for the credits. And despite minor criticisms Gurinder Chadha has done a very good job in humanising a complicated story that may make you want to delve deeper. It’s because I stayed up late last night googling Nehru, Jinnah, and the Mountbattens that this review comes to you several hours later than intended.