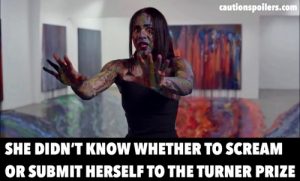 Art See Devil is the suitably overblown anagram I managed to get out of Vetril Dease. He’s the mysterious dead artist whose haunted paintings drive this satire targeting the self-perpetuating greed of the art world.

I may well have been seeing things that aren’t there, not unlike Morf Vandewalt (Jake Gyllenhaal) who starts noticing movement in the paintings just as his gilded position in art criticism shatters.

“A bad review is better than sinking into the great glut of anonymity” says Morf, something I’m considering putting on my Rotten Tomatoes bio, and a gift to critics who don’t like Velvet Buzzsaw.

I did like it, a lot, even though it boasts more ham than a rare-breed pig. It’s not so much that the actors are over the top, and more that their characters are entirely performance: living, breathing parodies, almost works of art themselves.

Who hasn’t stared at an acclaimed work of art, baffling in its apparent ordinariness, and tried to construct in their heads some particularly elaborate sentence to describe it, half-mocking and half wanting to be right? And then harbouring huge resentment towards those whose metaphor-laden sentences simply roll off the tongue? Visionary, mesmeric, drools Morf in wonder, though he’s also bored by critique, which he sees as “limiting and emotionally draining”.

This is a hugely enjoyable romp, where LA’s greedy gallery owners, critics and art advisors get their comeuppance in painful ways, ruining their designer clothes in the process.

The paintings that Josephina (Zawe Ashton) finds when her reclusive upstairs neighbour Vetril Dease dies aren’t that great, I thought. Not that I know anything about art, apart from that I know what I like. (I know some of the classics though. Is Morf’s perfectly proportioned boyfriend Ed, diving naked into their LA swimming pool, referencing Hockney?)

Their colours are lushly fantastic, their style out of place on the big white walls even as their luridness mimics the seething art underworld. Morf sees a very un-silent scream coming from them though, thanks to the artist’s horrific childhood: “cruelty beyond the bounds of humanity” at the hands of his abusive father.

Dease wanted the paintings destroyed after his death. Josephina wants to sell, but her boss, gallery owner Rhodora Haze (Rene Russo), holds her to her non-compete agreement and demands she get her cut.

The first exhibition is a triumph, though the pictures are instantly disruptive to the established way of their world: Morf’s reviews no longer browbeat the art world into submission and acceptance, as people criticise to his face what he’s written.

Soon that disruption is fatal. The gallery handyman steals a picture and catches fire before being pulled into a painting of monkeys in a grimy restroom; an art advisor loses an arm to an exhibit, the stump spurting blood as she screams. (All the victims are alone. What is the point of a gory death if nobody witnesses it, they might well ask – though their bodies, when discovered, certainly add an extra layer to the artworks in which they’re found.)

I liked that in a movie about the rarefied and metaphor-heavy world of art, the shocks are familiar and blatantly signalled. There’s the crescendo of dread as Josephina rifles through Dease’s creepy apartment, before his missing cat shrieks its presence. Dolls flicker their eyes, films start playing even though the plug is disconnected. Eyes in paintings follow you round the room.

Jokes, too, are obvious but will always be funny – “it is not art” says John Malkovich’s creatively blocked artist Piers, after art dealer John Dondon (Tom Sturridge) mistakes four black bin liners sitting in the middle of his empty studio for a new Great Work.

There’s only one nice main character in Velvet Buzzsaw and that’s Coco (Natalya Dyer), the 22 year old assistant at Rhodora’s gallery. Coco is from Michigan, and fears lack of money will soon send her back there. She dresses like a cute secretary – adorably quirky in a mainstream way with her big glasses, flippy skirts and one good blazer.

Clothes are key. Any pleasant characters dress like they at least partially shop at M&S. The most greedy and narcissistic look and sound the best; we still want to be them even while despising them.

Rhodora’s favoured white floaty outfits belie her hard-nosed business acumen, as she poaches artists, uses Morf and hides artworks to push the price up, aware that rarity adds more to value than quality does. Josephina’s bright clothes are a cover for her lack of experience – she’s ambitious but lazy, greedy and out of her depth.

Morf dresses with expensively stylish dreariness: dark suits and white shirts, his knowledge of art and the florid language he uses to describe it enough to make him stand out, even without his severe black haircut. Sometimes he’s naked, laptop perched on his crotch. The women never are, or are shot so we can’t see anything.

Gretchen (Toni Collette), with her angular blonde bob, wide-legged trousers and colour block cardigans, is upfront about her avarice but makes the mistake of thinking Morf shares her willingness to cheat to make money when he considers his purity to be his currency.

Director Dan Gilroy’s film is sometimes confused over what effect the pictures have. Initially they hold people in their thrall, though that tails off. Characters too, appear briefly (I’m not sure what purpose Gretchen serves), then wander off for long stretches. Being around such horrible people is wearing and the film could have done with more pruning.

It’s nicely straightforward though, as we discover all those gruesome details we want to hear. Dease spent decades in an asylum for killing his abusive father, a patricide that went on for several days. The asylum experimented on its patients. Morf writes the brochure for the exhibition – the paintings are, he says, “a howl for answers or retribution that never comes”.

This is the lurid melodrama of an American daytime soap opera – despite Josephina’s monotone delivery, her every banal utterance sounds as if she intends it to be the precursor to an episode cliffhanger.

And it skewers that melodrama in hilarious fashion, as she intones over the phone to Rhodora, a barely hidden trace of glee at being the one to deliver the news that the security guards who found the armless woman’s body in a pool of blood assumed it was part of the exhibit and opened the gallery.

Velvet Buzzsaw is available on Netflix.