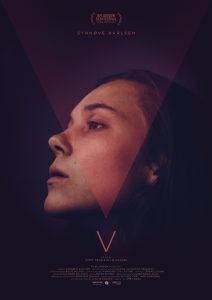 Not everything you find on Google about vampires is true, says 16 year old Minnie ruefully: “I didn’t get fangs, I certainly didn’t develop some unearthly beauty!” she says as she sits in the kitchen of her flat drinking a bottle of blood she keeps in the fridge.

Some things about vampires are true though, as we find out as she peeks through the corner of the blanket over the window, onto the twilight scene outside, children playing and a potential victim standing chatting on his phone.

Synnøve Karlsen is excellent in this mostly to-camera short film about a teenager coping with being a vampire, and using it as a way to think about her relationships with her mum and with a man who abused her.

Her performance encapsulates that period when cockiness gives way to rueful reminiscence and regret, mostly for things that aren’t her fault. It’s an understanding that most of us don’t have to acquire until we’re much older.

(My only issue is that at times Minnie talks a little too quickly to understand everything she’s saying. Then again so does everyone I know between the ages of 9 and 19.)

V feels like an allegory about being a teenage girl, and coping with the changes that entails: from the essential ones that you can’t avoid as part of growing up, to terrifying incidents that no one should have to endure. Minnie seems to blame herself but with her mum dead she has no one to help or protect her.

Her face possesses a greyish pallor, but no worse than on many people forced to live twilight lives at the edge of a society that ignores them. Though being bitten and turned has changed her irrevocably, a forced invasion on her body.

Minnie’s vampiric condition is only the obvious way she’s trapped; her enforced loneliness making it even harder to cope with what she’s been through.

Dean gets to upend some common fears. Talking to camera while wandering through an underpass at night, Minnie suddenly stops. We see her from a distance, looking back; if she’s heard footsteps, for her that means a potential victim.

V is funny too, in a hard-hearted kind of way, as Minnie sits in front of a bath, a victim’s blood-streaked arm dangling over the side, the rest of the body hidden by a red-spattered shower curtain.

Dean has crafted an engrossing twist on a familiar bogeyman – recasting a century-old monster as a vulnerable young girl, and giving us a reminder about teenagers’ vulnerabilities and how we let them down.

He often manages to tell us a lot without always showing us a lot; and at ten minutes it’s the perfect length to tell Minnie’s story and leave us wanting more.

V from Jimmy Dean on Vimeo.