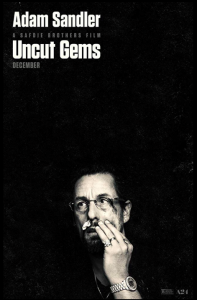 “They say you can see the whole universe in opals” says New York jeweller and gambler Howard Ratner (Adam Sandler).

Look closely at the start of the film and that universe turns before our eyes from the sparkling multicolours of the gemstone into Howard’s colon as he undergoes a medical procedure; and throughout the film his tunnel vision means he misses much of what’s around him, as we follow him on an adrenalin-fuelled snakes and ladders game across the city.

Hearing the surname of Howard Ratner, the high-stakes, high-stress Diamond District dealer in Uncut Gems, immediately had me wondering if it was a reference to Gerald Ratner, the British businessman who in the 1980s helped wipe £500 million off the value of his family’s jewellery business with ill-judged comments about his products. (A decanter and glasses for under a fiver was “total crap”, some earrings were “cheaper than an M&S prawn sandwich but probably wouldn’t last as long.”)

Apparently it isn’t, but it could be. The quality of the product is entirely different – Howard may sell Furbys but they’re gold, diamond-encrusted ones – though there’s a parallel between both men, in that both seem determined to snatch defeat from the jaws of victory, sabotaging their own lives in the process. Though Howard, it must be said, always takes high stakes to a new and elevated level.

In the Safdie brothers’ hugely enjoyable if agitatingly tense tragicomedy, Howard’s tendency to always have his eye on the next prize, and refusal to call it quits when he’s ahead, could literally be the end of him.

Sandler is glorious as a man whose addiction to massive bets has already destroyed his marriage to wife Dinah (Idina Menzel) to the extent that she calmly tells him “I hate looking at you, I hate being with you and if I had my way I would never see you again”. Their divorce is planned for after Passover, and until then they go through the motions of family life.

Howard’s reverence for risk is matched only by his reverence for gemstones. His latest purchase is a rare black opal, mined by Ethiopian Jews; it’s a historical and cultural link for Howard that makes it even more attractive to him. The opal is still uncut when it arrives at his jewellery shop, where he delightedly shows it to Boston Celtics basketball player Kevin Garnett (playing himself), and allows Kevin to borrow it for one night to hopefully bring good luck in the game.

Howard takes Kevin’s elaborate ring as collateral, immediately pawning it so he can place a bet. And this is Howard all over, pawning, paying, and playing people off against one another.

Kevin refuses to give back the opal straight away as he loves it so much. He even tries to buy it but Howard has had a valuation for over a million dollars, and sends it to auction. This should be the big payday that will finally set Howard free from loan shark Arno to whom he owes one hundred thousand dollars. Meanwhile he continues to place huge bets on sports games, while having an affair with his young assistant Julia (Julia Fox).

It’s a fine line he draws for himself, careering along a high wire with no safety net. While success would mean a massive victory and a huge payday and failure would mean the loss of everything, I don’t think that’s why he’s doing it. This life of glittering jewels, gambling and violence isn’t glamourised as Sandler paints a picture of a man who couldn’t live any other way and can only escape by running forwards.

Not even the fear when Arno’s henchmen turn up at his daughter’s school play, or the humiliation of his estranged wife having to release him from his own car boot after he’s been shut in naked, is enough to give him pause.

This is a joyous and tightly plotted frenetic thriller, and watching him became an addictive thrill for me too; partly because of its pace and twists, and partly because Sandler so expertly chips away at Howard’s brazen, seedy, thoughtless exterior to the broken family man within.

Howard’s mistake is in rarely stopping long enough to see himself. Suddenly when it all quietens then we – and he – see the Broken Howard. His mistress is a gem, cheery and unfazed, and Fox imbues her with un-airbrushed sexiness and genuine warmth. In a story about rocks she’s the real deal.

They truly love each other but their relationship has the honestly and selfishness of children: “I’m really upset too” says Julia, looking at his tear-stained and beaten-up face. “I wish you were nicer to me” he replies, and, bereft of his next move, “I can’t figure out what I’m supposed to do”.

The soundtrack is often chirpy ’80s synth, which goes well with the bright brashness and the 100-mile-an-hour lifestyle loved not just by Howard but many of the people he associates with, the noise and shouting and freaking-out reactions to anything and everything. It often looks like one big, noisy family.

As we follow Howard, his bad decisions seem less like anything he has control over; in fact they don’t seem like decisions at all, but propulsion. His private and business lives are entwined; at one point he gets into a fight with The Weeknd because he thinks the singer is getting off with Julia.

Not for nothing did I find myself whistling Tubthumping by Chumbawumba under my breath. This is a thrilling (on the surface) and melancholy (underneath) experience, watching one man bounce up and down, the likelihood of failure growing with each new choice.

Uncut Gems is on general release in UK cinemas, and will be on Netflix from 31 January 2020.

Note: one of the delights of Uncut Gems has been reading some of the articles and interviews around it, whether about its pop culture influences or its Jewishness (I am neither Jewish nor American). I loved Hannah Woodhead’s article for Vulture about the famous Furby and this from Heather Schwedel for Slate, where she interviews the Sadie Brothers about “making the most Jewish movie in years”.