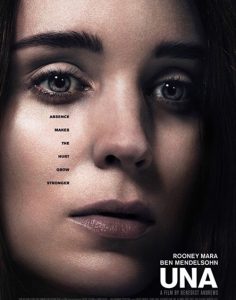 “What do you want?” asks Pete at the warehouse where he works, when a face from the past turns up. “To see you” replies Una (Rooney Mara), the now twentysomething woman he groomed and sexually abused when she was a child.

Pete (Ben Mendelsohn) was Ray then, when they ran away together (technically abduction would be a better word), before the court case and his jail time.

This is a film about making sense of the past, and is told in the present and via flashbacks to the abuse and subsequent trial. Una’s feelings are undeniably complex, unsurprising considering your childhood is meant to anchor you for the future but hers has cut her adrift. She knows she was groomed now, but she still clings to Pete despite her fury.

And she’s furious at him – he has been able to change his name, while for her “the only thing I didn’t lose was my name. I had to keep my name”, making her a target for victim blamers and even his ex-girlfriend months and years after the trial.

They laugh and reminisce too, about the notes she left on his car as a child to get his intention: “Your girlfriend’s got a glass eye”.

The lack of agency and control she had during the process to bring Ray to justice also feels abusive to Una, and her description of being held down so doctors could obtain medical evidence is horrifying. Later, during the trial, refused permission to give Ray a message, she tells him loudly over the courtroom video link that she loves him.

Una hasn’t been able to move on but Pete has, and doesn’t seem inclined to help her do the same. For him it’s meant a new name, new relationship, and new job, though his old attitudes remain. He’s still claiming to understand what he did wrong while excusing it as Una was special. A “special” kind of victim-blaming as she is seen as responsible for her specialness.

And there’s always a line he can draw between himself and those men who look at pictures of abused children online: “Those sick bastards, I was never one of them”. After all, he only photographed her, no-one else.

Initially she’s a hugely irritating distraction to Pete, as the company announces it’s streamlining and cutting jobs, and he needs to be at those meetings.

Despite this Una is in charge when she visits Pete, less because she knows what she wants out of their meeting than because that uncertainty makes her unpredictable. She leads the way in sex, then enquires plaintively as they lie on the warehouse floor, “am I too old?”.  Of his new wife she asks him if her ageing skin turns him on.

A couple of scenes are almost deliberate parodies. When she first turns up he finds a room for them to talk in and wants the door left open, just as an adult speaking to a child alone might require to ensure openness and transparency, and as protection for both; but she demands it be closed.

Then during a flashback to Una’s childhood she’s at the swimming pool and Ray is there. Afterwards in the changing rooms, surrounded by her friends, they ask her, giggling, about the man she was with: ‘tell us!” they cry, en masse. It reminded me of Grease where the girls at school are asking Sandy about the boy she met at the beach during the summer. But Una is a child – she describes herself as “a stupid girl with a stupid crush” – and she should have been given a safe space to learn to be a teenage girl and then a young woman, not been subject to a predator using her crush as an excuse to abuse her.

Mara, English accent included, is excellent. Una is utterly isolated and seems to exist in an almost empty world as she struggles with what he did to her.

Mendelsohn is terrific, imbuing Ray/Pete with a knowing, sly shiftiness; implying he just made a mistake and has done his time, but still making self-pitying excuses and moaning about the treatment he suffered inside, while all the time blaming Una.

Unsurprisingly this is quite a harrowing watch. Una started out as a play (Blackbird) and it’s definitely got that staged quality; the unravelling of their feelings also rather runs out of steam as it progresses. Not much is resolved either, though that’s not a criticism in itself.

The lighting is white and blue, in this warehouse at night, near-empty of people. But it doesn’t look cold or stark; functional and sparse certainly, but not chilly. It contrasts to the flashbacks of suburban home life, and the bedroom with the twin beds in the B&B they run off to.

Una’s mum Andrea is played by Tara Fitzgerald, in a small role as a woman utterly devastated by what happened. I would have liked to have heard more from her. She looks far more haggard than the time difference between now and those trial flashbacks would account for. But she’s also trying to make up for something, on the point of calling the police if her adult daughter doesn’t return: “Please come home, let me know where you are” she pleads.

And then there’s Pete’s friend and colleague Scott (Riz Ahmed), terrified he’s about to lose his job as the company rationalises, who takes Una back to his flat. The two of them later go to a party at Pete and his wife’s house, mirroring the flashback where Ray attended Una’s parents’ barbecue all those years ago.

This time it’s the end not the beginning though, and everything comes to a head, though the film finishes not with fireworks but with a slow smouldering ember.

And Pete has learned nothing, still putting himself in the position of the obsessed man in love with Una rather than an abuser: “I promise, you were the only one”.