You are here: Home / Film Reviews / Two For Joy 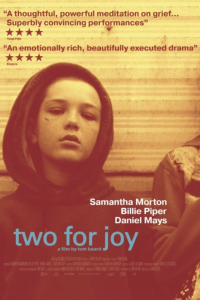 For the widowed Aisha (Samantha Morton) grief itself has become the driving force, rather than the reaction; with her family caught in an enervating circle of misery where the sheer exhaustion of getting through the day prevents them from escaping.

It needs a huge catalyst to kick them off the repetitive cycle onto a different path so they can finally move forward.

This is the first film from photographer Tom Beard, and though it is at times unutterably sad, it’s beautifully made with superb performances that get to the heart of each character’s pain, and the strategies they use to hide from it.

Aisha’s days are spent in bed, with maybe an hour on the sofa in the evening. Son Troy (Badger Skelton) is excluded from school. He looks about 8 but spends his days out alone, on his bike and fishing. He’s angry and lost but always throws the fish back in when he’s caught them.

Violet (Emilia Jones) is already mothering her mother, except at the very start of the film where on the last day of school before their exams she and her friends indulge in that time-honoured tradition of writing all over each other’s school shirts. It’s a last touch of childhood for her, and the end of her safety net.

She’s not just looking after her mum though, and has taken on too much, trying to manage the little things that don’t really matter. When Troy comes in soaking wet from a thunderstorm she berates him for treading water through the house when that’s the least of their worries.

Aisha’s long curly hair is a wall to hide behind and her fluffy dressing gown a physical comfort as she huddles on the sofa, clutching it round her. At night she sobs – not acceptable crying but those guttural sounds like a wounded animal. The doctor gives her pills to postpone when anyone will actually have to tackle her grief; Vi rages at not being told. Morton is extraordinary, Aisha’s mental pain emerging in physical ways, but it seeps around them all rather than draining away.

It’s Vi who needles her mum into taking them down to their dad’s caravan for the weekend, which has been lying empty since his death. Her mum has to get dressed though packing is almost beyond her as she stares blank-faced at her empty suitcase.

Down at the coast it’s windswept and cold, the embodiment of a hoped-for “change of scene” being a good thing even when it’s rainy and the waves are lashing the pebbly beach, if it can nudge Aisha out of her sadness or simply give them a breathing space away from the same four walls.

The place is almost deserted, the games room bleak with its pool table and stack of tatty games in a corner. The only people around are manager Lias (Daniel Mays), his sister Lillah (Billie Piper) and Lillah’s daughter Miranda (Bella Ramsey), who is about 12.

Lillah has trouble with Miranda’s dad, having shrieky phone calls as she wanders the caravan park, drinking red wine and smoking, and then arguing with her brother about his own absent kid. (At least she and Aisha are with their children.) Piper is superb as the highly strung Lillah, keeping busy with her tangled relationships as an avoidance tactic. She’s the kind of mother who wants to do better but has already left it too late, so makes up for it by giving advice to other people in the sort of performance parenting where your own offspring don’t even need to be there. “You can’t keep ’em on a leash. Kids need to make mistakes, that’s what makes them stronger” says Lillah, who doesn’t know where her daughter is.

Miranda is utterly lost but every cry for help is drenched in such lip-curling contempt and unfocussed rage that the adults who should help her don’t and can’t. Despite Aisha’s night-time sobbing it’s Miranda who is the wounded animal. She and Troy strike up a friendship, two lost souls. It’s a incredible performance from Bella Ramsey, a character transformed into an embodiment of pain – in a film crammed with excellent performances, she blazes.

Violet at least gets to be a teenager again, she thinks, as safety in numbers mean she can stop being mum to everyone plus her mum. There’s a scene where she, Troy and Miranda are dropped off by Lias at a funfair in the local town. Violet is on one of those rides that holds you against the inside of a spinning circle. She starts off looking scared but enjoying it, at last a thrill but with a literal safety barrier, just how teenagers should experience the world. Soon though she’s becoming increasingly scared and out of control but can’t get off until it finishes.

And anyway, everyone has become so reliant on Violet that it becomes impossible for her to relinquish responsibility even if she wants to (Emilia Jones is very good; Vi is out of her depth as a mother figure, as are all the actual mums in the film).

When disaster strikes it’s horrifying but not really unexpected.

Two For Joy is noisy: the loud sea and the thunderstorm and the shouting. Sometimes it sounds natural and at other times like a drumbeat in their heads. Grief is noisy, that’s one of the reasons it can be so hard to escape it.

The two homes – Aisha’s estate and Lias’s coastal caravan park – are equally bleak. They aren’t shot with the washed-out beauty you sometimes get in this country. There’s none of the bracing cold and wind that makes a freezing day at the seaside actually a good thing.

The lights are always chillingly bright, with little warmth; whether Aisha’s home, clean but sparse, or the brash colours of the town’s arcades swapping to the weird lights of a drug trip as stolen prescription meds take effect, and Miranda’s flashing-lights necklace.

This is an often melancholic film, though a hugely affecting and very realistic one – whose characters, when they find they can move themselves forwards, do so tiny steps.

Watch the trailer for Two For Joy: