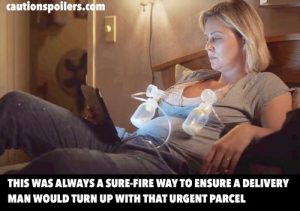 If throwing a chair is your response when someone helpfully suggests you sleep when the baby sleeps, then Tully is for you.

Though if you saw a chair that didn’t have piles of washing on it, or a stack of baby books you don’t have time to read, you’d probably sit down on it and fall asleep.

There’s a big spoiler in this review, and I don’t mean the truth about what giving birth does to your nether regions.

Jason Reitman’s film is realistic about motherhood without falling into the ‘it’s wine o’clock!’ trap where everything is beyond awful but resolved by posting that gif of a giant glass of red on social media.

I recognised a lot of what Marlo (Charlize Theron) goes through with her baby (her third), much of which can be boiled down to a loss of control, though our initial responses were very different.

She’s too exhausted to bake cupcakes, and eats family packets of crisps – I was soon back in my pinny and speed walking up hills. Before you throw the contents of your twisty nappy bin at me, it was purely because I needed to feel I knew what I was doing, with this bundle mystifyingly left in my care (he’s 9 now and we both still feel like this).

I’ll admit to finding the titular night nanny incredibly irritating. I loved the ruthless portrayal of Marlo and what her baby’s arrival does to her. I was far less keen on the young woman who understood changing nappies and latching on an infant, but nothing about what motherhood really brings: the indignities, the exhaustion, the final nail in the coffin of the old you.

And don’t even mention her biggest crime, turning up the first night in a crop top, toned tummy on show.

But stick with Tully because it’s (eventually) terrific; though it also left me feeling angry and duped, not unlike motherhood itself. (A deliberate irony? Presumably.)

Pre-Tully, the heavily pregnant Marlo is at a coffee shop after school drop-off; only for another woman to point out her decaf still contains miniscule amounts of caffeine. Motherhood – from pregnancy to your own death – is a time when everyone feels free to tell you you’re too protective or too lax, and then blame you if you take their advice but something goes wrong.

At home she sits in her expressing bra, bottles attached to her boobs, slowly filling with milk. (Very slowly in my case, and I had to switch to formula, which my kids loved though I’ll admit they’re now a bit dim.)

Later a bag of Marlo’s expressed milk spills across the kitchen counter and I’m amazed she didn’t start crying, which is what I did, watching it on screen.

The sheer drudgery is exquisitely laid out, interspersed with those perfect moments when a snuggly baby nestles into your shoulder, snuffling happily. But then it’s back to the boob-squirting, the twisty nappy bin and resting your plate of cake on the overhang of your stomach.

It’s a truism that humour gets you through tough times and it’s noticeable that the darkly witty Marlo loses her ability to joke as exhaustion takes over.

(Though she still comes out with the odd killer one liner: “do I have a kid or a fucking ukulele?” she shouts at the school principal after hearing, again, about her son’s “quirks”, which the school loves yet apparently cannot accommodate.)

Her husband Drew carries on with his job and reads with the children, but also spends hours playing computer games; most new mums don’t even get to read a book, unless it’s one telling us we’re doing everything wrong.

Marlo acquires Tully (Mackenzie Davis) after her rich brother and his perfect wife – sympathising that “the ninth month is tough, I could barely get to the gym” – gift her a night nanny.

That first evening Tully sends Marlo to bed, waking her when Mia needs feeding. Coming downstairs each morning, Tully is gone, the house is clean, flowers sit on the table and cakes have been baked. Gradually Marlo finds her old self, and feels more in control.

Theron is shatteringly good as Marlo, a woman gradually losing everything that makes her her. Struggling to cope with the everyday minutae, the bigger picture is too hopelessly complex to even imagine. She and Davis have a perfect rapport.

Initially I found Marlo and Tully’s relationship bizarre; uttering Instagram platitudes and always in possession of the better anecdote or more outlandish fact, Tully reminded me of those 28-year-old MBA-wielding management consultants who used to plague my office, well-versed in business practice but with no experience of working in one.

It only makes sense if Marlo is the most selfless woman on earth, or if she sees something in the younger woman that sparks some recognition for her own younger self.

(Though it isn’t all moonlight and roses – on a night out, Tully tells Marlo that the mum’s life is, in every way, boring. Which made me realise how those “letters to my younger self” I keep writing should include “stop being so bloody annoying”.)

The twist is that Tully is the 26 year old Marlo, and it’s Marlo doing all that work in the middle of the night.

Is she conjuring Tully as a sweetly whimsical way to cope with her life, or is the answer darker and bleaker?

Postnatal depression is common (and often undiagnosed). There’s also a rare but extremely serious mental health condition new mothers can suffer from, called postpartum psychosis, which can cause hallucinations. Writer Diablo Cody never explicitly mentions this, so we have to assume Marlo has postnatal depression.

I do think her diagnosis and treatment should have been made clearer though, as many new mums will be watching. As it is, the ending positions Marlo’s mental health issues as more of a wake-up call, to be resolved by Drew doing the dishes while Marlo kneads her own bread.

Not that I’m dissing the movie. It’s a starkly funny, sympathetic and ultimately surprising take on modern motherhood, that manages to avoid the usual cliches.

Nor am I dissing bread-making – I know from experience it’s the perfect stress reliever when the 50th person tells you to sleep when the baby sleeps, and you can’t find an empty chair.

buy tully on dvd or blu-ray from amazon.com