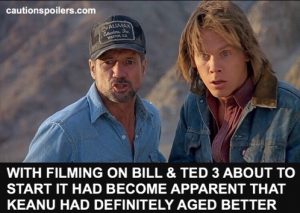 If Tremors isn’t close to B-movie blueprint perfection I don’t know what is. Funny and silly, it includes many well-used tropes, but it’s also played straight by talented actors, with proper monsters.

Who doesn’t love Kevin Bacon? He’s got a game invented about him (Six Degrees of Kevin Bacon, as he’s worked with so many people in Hollywood everyone is connected to him within six steps) and he has stayed married for so long to the same woman that if he got divorced we’re supposed to take it as one of the signs of the coming Apocalypse.

Val (Kevin Bacon) and Earl (a brilliantly sardonic Fred Ward) are odd job men in a tiny ex-mining town in the Sierra Nevada desert. They find out that there’s a science student recording seismic activity in the desert near them, and head over to meet her hoping for a hot chick with great boobs. Then Rhonda, a cute brunette with her nose attractively covered in suncream, pops up with talk of unexpected activity underground.

Soon the two men are finding the dehydrated body of an elderly resident up a pylon, where he has died of thirst after apparently being too scared by something to come down, a bit like me after hosting a playdate.

After finding an unattached head peaking out of the sand at them (that playdate again!), and  boys of various sheep, it gradually it dawns on them that Something Is Up, as Rhonda gets weirder and weirder readings on her equipment.

The giant worms, or Graboids, are pretty gross when they do appear, as if someone went round a special effects storeroom grabbing bits of leftover monsters and sticking them together.

And this being a B Movie, Tremors has some classic scenarios:

Also it has fun with the B Movie tropes it doesn’t use:

There’s also clearly romance blossoming between Rhonda and Val. Oonce Rhonda, Val and Earl realise that the Graboids know where they are by using vibration, keeping quiet becomes imperative. But they’re in the desert, on a rock, far from Rhonda’s truck.  After spending the night out in the open on a giant rock, Val wakes up with Rhonda snuggled up to him. (In order to escape the three of them pole vault from rock to rock until they reach her vehicle, handily parked just next to a… rock.) The romance is still very chaste though – let’s face it, this film is a love song to B movies and giant critters, not to Rhonda.

The performances are warmly funny without being too knowing. And Val and Earl are a fabulous double act. Little is said but when it is, it means something (basically the opposite of what they actually utter): “Val: “good luck Shithead!”. Earl: “Don’t worry about me, Jerk Off!”

There isn’t a disbelieving mayor up for re-election but the characters are a delight. Poor little pogo-ing Mindy, forced by her family to sit in a chair with a Graboid’s lifeless tentacle for a photo opportunity, despite her terror. Burt and Heather the survivalists who really come into their own when firepower is needed and everyone realises that taking the piss out of their prepping, gun-ready lifestyle maybe wasn’t the best idea.

A glorious romp with lovely performances, while Tremors is not really scary there are some edge-of-seat and shock moments. Plus of course umpteen opportunities for jokes about the earth moving. What more could you possibly want in a film that isn’t Star Wars?

buy / rent Tremors from amazon video or dvd or blu-ray from amazon.com