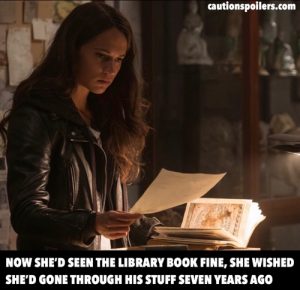 Back in ancient times, Giant Tomb Door Puzzle Creator must have been a legitimate and highly lucrative career path, there are so many of them; the opening of which involve feats of lateral thinking apparently only available to 20th and 21st century western explorers of high morals.

Yes – like in many movies combining brave adventurers, uninhabited islands, ancient tombs kept sealed thanks to supernatural myths, and sinister Europeans in attractively sweaty cheesecloth shirts, there’s a giant front door in the form of a puzzle.

If you’re not going to see this, and have never seen Raiders of The Lost Ark, or indeed the 1980s BBC show The Adventure Game, imagine coming home drunk after a night out, fumbling in your bag for your key, only to find your front door has turned into a Rubik’s cube.

I didn’t see the original Lara Croft: Tomb Raider and I’ve never played a video game, so I don’t know if that makes me the best or worst audience for this reboot. Whatever, I quite enjoyed it.

There’s little original here: Roar Uthaug’s movie borrows from the aforementioned Raiders, all The Mummys, and even bits of Alien vs Predator. The twists (tomb-related and otherwise) are obvious, and despite the action the movie doesn’t feel particularly pacy.

But while no adventure masterpiece, it’s (mostly) convincing regarding Lara’s abilities, and Alicia Vikander’s Lara is a realistically uneven heroine embarking on an adventure which will be the making of her.

I grew to like Lara a lot. She’s believably unformed, with the basis of her decision-making varying between clear-sightedness and instinct-rooted wild thrashing.

Lara may have been born into money and privilege but she’s refused to take her own inheritance as she doesn’t want to admit – seven years after his disappearance exploring the lost Japanese island of Yamatai – that her father Richard Croft (Dominic West) is actually dead.

Working as a courier cycling round London to pay her way, Lara trains at a backstreet London boxing gym; so when she’s up against her tomb raiding adversaries she’s (mostly) a realistically scrappy fighter.

She also feels pain, and during her actual escapades gets suitably muddy (though admittedly at the end she’s only slightly grubby, despite wearing the same vest and combats for days).

Lara’s London life is cash-poor, and she initially takes part in a different kind of hunt to make money; a fox hunt, where a cyclist with a fox’s tail on their bike is chased through the streets by a pack of cyclists. Desperation forces her to take part, though it also acts as a showcase for both Vikander’s athleticism and Lara’s street-smarts.

Her guardian Ana (Kristin Scott Thomas) reappears in her life too, wanting her to sign those papers accepting her father’s death. It’s while at Croft HQ that Lara is given a wooden Japanese puzzle from her father, leading her to a secret message from him.

Lara and her dad are meant to be super-close and super-alike, which means when he instructs her from beyond the grave to destroy his top secret Himiko Project files I assumed it was a bluff to get her to follow him to Yamatai and solve the Himiko mystery herself.

It wasn’t, but she heads off to the island anyway, where centuries ago Queen Himiko, Mother Of Death, was entombed by her generals to save the world from her evil powers.

Helping Lara cross the dangerous seas to Yamatai is Lu Ren (Daniel Wu), a drunken sailor and captain of rickety old boat Endurance; his own father went missing when taking Lara’s dad to the mysterious island.

Sarcastic and realistic about their chances, he’s also supportive and brave without being remotely leery, which makes a change in an adventure movie featuring a young shiny-haired woman in a vest top and combats.

Anyway it’s a good thing she hasn’t signed those papers as her dad’s not dead, though when she finds him he does look like Tom Hanks in Castaway (showing my age here but my main worry when he popped up was that he would break his only pair of glasses).

Unable to escape the rock- and wreck-fringed island, he’s been hiding from Mathias Vogel (Walton Goggins), a sweaty cheesecloth shirt-wearing employee of sinister organisation Trinity. Vogel’s not doing any work himself, instead enslaving shipwrecked fishermen to do the backbreaking job of finding the queen’s tomb for him and his mysterious boss.

Vikander is quite brutal in her action scenes. The best is a terrific section involving a huge waterfall, a corroded and ancient crashed plane, and a rotten parachute – a long, unfolding sequence of events which pushes Lara to her limits. It’s scary and gripping; for Lara as much a feat of self-belief as it is of endurance or strength.

Goggins makes a good cartoon villain. There’s no depth to Vogel, and though we know he’s also a parent, he is happy to shoot anyone in his way; or, for some continuation-of-plot reason, not shoot them.

Wu is terrific, though he doesn’t appear nearly enough, and the parallels between his and Lara’s situations (each has treasured photos of them as carefree children, grinning madly with their doting dads next to them) are rather wasted.

I can only assume Richard Croft also inherited his money as frankly he’s a bit daft. In thrall to the supernatural since losing Lara’s mother, his witterings about terrible powers destroying the world at times even leave Lara looking like she’s considering siding with sweaty cheesecloth shirt-wearing arch enemy Mathias instead.

This is a silly but quite enjoyable film. New ideas (and more women!) would have been welcome, though what I really craved more of is fun – Tomb Raider is decidedly po-faced.

I’d like a sequel though. It’s refreshing to have a female kick-ass lead who isn’t perfect and can make mistakes, without being a stereotypical diving-into-danger hothead. Vikander and Lara just need a more inspiring and modern story to get their teeth into.

Available on vod, blu-ray, dvd and 3d from amazon uk

Available on vod from amazon.com