You are here: Home / Film Reviews / To The Bone 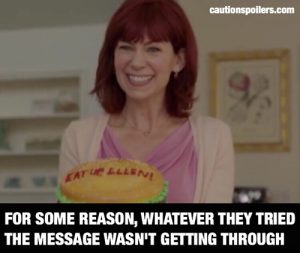 Screwed up eating can mean knowing the calorie cost of everything, but the value of nothing.

I spent the 1990s like that, as I bounced from 126lb to 112lb to 160lb and down again, a lover of food who never actually enjoyed eating. Eventually I resolved to move on from bingeing one day, apples and cigarettes the next, and eat “normally”. Which was, frankly, terrifying.

I once sat in the corner of my living room nibbling two rice cakes while my flatmate held a dinner party right next to me. My rudeness horrifies me more than the extreme dieting. I did try to make it up to people though, mostly by baking them cakes.

So while I never ate tissues, or “sewed rocks into my panties” to fool a doctor, or could in any way be described as an over-achiever, I have come away (along with the ability to scrounge appetite-suppressing cigarettes off the stingiest of people) with a small insight into To The Bone‘s story.

Click here for the To The Bone video review

Writer-director Marti Noxon’s semi-autobiographical tale follows Ellen (Lily Collins), a young woman with anorexia, as she starts a last-ditch inpatient programme under a maverick doctor. (Maverick doctors are nearly always male. What an ego boost they must get from it.)

It’s a film that drips desperation: families in a frenzy, desperately doing the wrong thing, so desperate are they to do something. Meanwhile Ellen and her fellow patients drift towards an unthinkable conclusion.

“I’ve got it under control, nothing bad’s gonna happen!” says Ellen, as much to herself as to us, but after several hospitalisations she’s running out of options.

Aged 20 she’s in a state of physical and emotional arrested development, with her starved body, her insolent, defensive “whatevers”, and her midnight sit-ups that contradict her agreement with her doctor that she wants to get better. Dr William Beckham (Keanu Reeves), her putative saviour, is a distant but avuncular presence, a parallel to Ellen’s always working, absent father.

To The Bone has proved controversial over whether it’s triggering for people who have suffered from eating disorders, and also over Lily Collins’ weightloss for the role.

I was surprised and uncomfortable to find myself, so many years on, desperate to know the numbers after Ellen’s weigh-ins with the nurse. And they never told us! But I don’t like trigger warnings and was more concerned about dullness. As Beckham points out, having an eating disorder, while horrible, is just so boring. You’re fixated and without the energy to think about anything else.

And there are times when this film, however well-meaning, is quite dull; characters struggling with obsessions isn’t always that interesting. Luckily Lucas (a charming Alex Sharp), an initially annoying fellow patient, adds some energy into the shared house. An English dancer who’s suffered a potentially career-ending injury, he’s starved himself down to 89lb. On the way back up now, he has more vigour so he can think and talk about other things. He’s sweetly gauche, but he’s also a breath of fresh air around the barf bags and laxatives.

There are several other inpatients, living in this house with no locks (“we know all the tricks” says Lobo, their nurse) with few rules beyond attending meals even if they don’t eat. And weigh-ins, where they queue, wrapped in blankets even though it’s LA.

Characters vary in how well-drawn they are. Lucas, Pearl with her ponies and feeding tube, and Megan who just wants a baby, are most memorable. I’d have liked to find out more about binge-eater Kendra, a young black woman from whom we hear almost nothing.

Dr Beckham takes them on interesting trips but his patients seem to have more fun with each other, throwing a party or nipping out for dinner. (Beckham is maddeningly underwritten. Work leaves him no time for relationships or children, yet he tells his patients the opposite – that they must be able to cope with life’s normal ups and downs.)

The humour is deflectingly black, though I liked Beckham’s line about never having had so many moms in a family therapy session when Ellen’s mother and two stepmothers turn up. Ellen’s father never appears and though the various mothers are criticised, they are trying. I had some sympathy for Ellen’s stepmom Susan (Carrie Preston), though the hopelessly misjudged cake she gives Ellen is horrifyingly hilarious. (Noxon’s treatment of men and women is interesting: the women are trying to help; the men are often absent. Even Dr Beckham is a distant presence.)

Lily Collins, who has talked about a previous eating disorder, is excellent but looks emaciated, and this in a medium that adds 10lb. In most cases, I don’t think it’s necessary for actors to have experienced what they portray – what, after all, is acting? – nor do I think it’s healthy to risk falling back into destructive patterns of behaviour for a role.

It can take decades to look with clarity on the jigsaw pieces that made up your life then and how they came together. I was very, very uncomfortable watching her and while I don’t want to criticise Collins or Noxon I think it was a bad idea. (That doesn’t mean the film shouldn’t have been made at all.)

25 years ago, when I was boring everyone to tears with how few calories I’d eaten that day, eating disorders, and their acceptable twin, disordered eating, were huge problems; but there were no pro-ana websites, no online thinsperation. Just a very skinny Kate Moss in a magazine, smoking.

The arguments about glamourising thinness still raged around Moss, her fellow super-skinny models and the photographers who shot them, an argument that carried some weight. To The Bone has been accused not of glamorising thinness but the eating disorders themselves. Glamorising, here, doesn’t mean glamorous. Growing extra body hair because you’re freezing, and carrying a pillow around as your spine sticks out, is way beyond wanting to look like a favourite star.

It certainly gets them attention though, even if they’d rather be left alone. But Noxon’s movie is actually realistically terrifying; someone says they’ve accepted Ellen may just want to die and that’s ok. Happy closure is not a given for anyone.

To The Bone is available on Netflix

Watch the trailer for To The Bone: