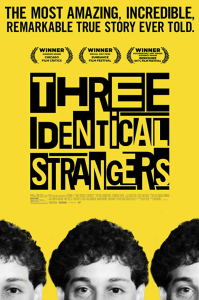 Warning: spoilers, though the story will be well known to many people.

One of the downsides of growing older is realising that there are few real miracles; and those fairy stories that used to appear weekly in the press and now appear hourly on social media, are usually just that.

Three Identical Strangers – about triplets adopted separately who discovered each other in their late teens – is a tale delightful and cautionary, hugely enraging while also asking questions of all of us.

It is certainly an incredible story; but what was behind those joyful initial revelations that the world latched onto was very dark indeed.

Three grinning college-age boys, dressed the same, sitting on a series of TV sofas, talk repetitively about the interests that they share; enjoying the limelight, but increasingly trying to shut out the sadness that is the root of their story and hence impossible to dig out.

On a similar TV sofa 20 years later, two smiling women, Elyse Schein and Paula Bernstein, twins also separated then reunited, also delight in sharing anecdotes about their similarities. Though they are also quick to point out that this is not in fact a fairytale but a story with light and shade. (The title of this documentary is a twist on the title of their book, Identical Strangers, about their own situation.)

Robert “Bobby” Shafran was 19 when he drove up to start at a New York community college as a freshman. Despite knowing no one, he found himself constantly greeted, slapped on the back and kissed by fellow students, before someone finally hailed him as as Eddie. Later that day a friend of Eddie’s found him, and asked him if he was adopted and when his birthday was; soon they were both in Bobby’s car en route to Edward “Eddie” Galland’s house, and a reunion as moving as it was fast.

Their story made the headlines, and then became even more incredible when a third identical brother turned up: David Kellman.

As the three boys got to know each other, their parents tackled the adoption agency as to why they hadn’t been told their babies were not, in fact, singletons; and then came news of a secret twin study that had deliberately separated identical twins and the triplets, adopting them out to different families.

Every year during their childhoods the three boys had been assessed by researchers; the parents were simply told it was a study of how adopted children adjust.

It sounds unbelievable, and it’s a story which makes me wish I hadn’t used the word “unbelievable” about so many very believable things over the years before watching Three Identical Strangers.

Despite this hugely damaging experiment, by the end of the film there’s still no consensus around nurture vs nature even among the documentary’s participants, and the study itself was never completed or published. The debate that this experiment was meant to decide on so definitively continues, precisely because of the ethical difficulties of studying it.

The three boys were deliberately adopted out to families of different socioeconomic levels.  Bobby went to a wealthy family where the father was a prominent doctor and the mother a lawyer; Eddie went to a middle class household; and David was brought up by a blue collar immigrant family who ran a small store.

All three had mental health problems growing up. Though in terms of love and affection David was blessed: his father seems to have been the glue that kept the triplets together in the early years after they first met, perhaps even more than their shared DNA. They admit they spent more time at David’s house than any other after being reunited.

The triplets are Jewish and were adopted out by the go-to agency for Jewish adoptions, Louise Wise. The agency was working with psychiatrist Peter Neubauer, an Austrian refugee. The holocaust and Nazis are mentioned several times, and there’s an air of disbelief that anyone could have thought this study was a good idea. And yet lots of people did. “This was not something that seemed to be bad” says an assistant from the office.

The assistants talk without emotion; the people affected want the human cost to them understood, and to have access to the unpublished study that is all about them.

This is an extraordinary and humane film. And what really brings Tim Wardle’s film alive is the contrast between the middle aged men speaking to camera now, and the photos and old footage from home movies and TV shows.

The fading pictures of the three young men enjoying their new celebrity and finding each other are a delight. But this is very much a documentary of two halves. The first is light and cheery, though with hints of what is to come. The second half is much darker, chronicling their struggles and looking for those responsible both for the study and for the men’s mental health issues. Photos of the boys as children then take on a new resonance. This split is only partly down to chronology and it feels manipulative at times, as early traumas are revealed much later.

Anecdotes are repeated in that early TV footage as neither interviewers nor the three men seem to want to dig deeper. Now, talking direct to camera, two of them, now in their 50s, still tell their story with practised ease, until they get to the great sadnesses of their lives which leave them feeling bewildered once more (Eddie, took his own life in 1995, a shattering blow to his brothers, already dealing with so much fallout).

What they missed out on was not just two decades of brotherly love and friendship but also the squabbles and jealousies that bloom among every family with more than one child; where most of us learn, to a greater or lesser degree, to rub along together when we have to.

The ending also makes us look at our own culpability in these feel-good tales and what we expect from the actual participants. Have we actually moved that far from seeing children from multiple births as oddities to be pointed at? There’s almost a sense of mild disappointment when we see pictures of Bobby, Eddie and David in different clothes which highlight their minor physical differences, rather than when we see them seated in identical stripy jumpers, saying the same thing at the same time.

The young men too become so practised on those TV sofas reeling off their similarities to entertain us, while journalist Lawrence Wright points out it’s their differences that matter. (Now much older, Bobby and David look less like each other than they did.)

We tend to assume that modernity means progress, but so many horrific ideas in science, psychology and medicine, from which we now rightly recoil, were once seen as progressive. And if history tells us something it’s that it repeats itself; despite our claims that something should never happen again we are remarkably lax about blocking such ideas.

Three Identical Strangers won the Dorfman Prize for Best Film, an award given to recognise powerful and outstanding filmmaking in both fiction and documentary films.