You are here: Home / Film Reviews / Zookeeper’s Wife, The 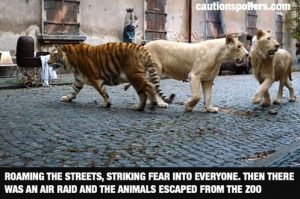 The Zookeeper’s Wife is a movie that shouldn’t so much have a star rating as a hankie rating – though the atmosphere is lightened slightly by the world’s bounciest baby camel, which joyfully careers around the zoo paths with exuberant delight during the early scenes. Until it’s shot dead by an evil Nazi.

Exuberant delight is in pretty short supply after that, though Antonina, who also careers joyously around the zoo paths, this time on her bicycle, comes closest.

For the film is based on the true story of the aforementioned Antonina Zabinska  (Jessica Chastain) and Jan Zabinski (Johan Heldenbergh), owners of the Warsaw zoo who risked their lives to rescue Jewish friends and strangers after the German invasion of Poland in 1939, as the persecution of the country’s Jews went from yellow stars on armbands to a Jewish ghetto and then to the concentration camps.

And while the film does veer into cliche and clunkiness at times, the most moving scenes – and some are heartbreaking – are thankfully unforced.

Poland is falling and what sound initially like metaphorical drums of war coming ever nearer, soon turn out to be the heavy drone of German bombers about to unleash their devastating cargo over the city. The air raid destroys most of the zoo, and later, as what is happening to the city’s Jews becomes clear, the couple decide to use their now-battered premises as a safe house for Jews smuggled out of the newly created ghetto.

As a plan this is audacious in the extreme – the Germans are using what is left of the zoo’s enclosures to store arms but as Jan says “whatever it is, whatever we do, we have to hide it in plain sight”. Their cover story is to use the unused enclosures for pig farming, so Jan can take his truck into the ghetto for food waste and bring back more than just scrapings and peelings.

Once at the safe house, their guests sleep during the day in the cellar and can only come upstairs when they hear Antonina playing her piano after midnight, when the Germans finally leave the zoo and go back to base. Every night there is a party with music and drinks and chatter, and as the number of people grows the midnight gatherings become larger. Naturally more people, and more children, means heightened risk and the characters often do things that seem to be wilfully silly.

Antonina is more than your average animal lover, letting her young son curl up with lion cubs and having a special connection with the zoo’s inhabitants. German zoologist Lutz Heck (Daniel Brühl) is quite obviously in love with Antonina from their first eve-of-war scene together and their story is clearly signposted. Lutz may claim to be an animal lover too, but he’s not averse to using them for his own ends whether planning a breeding programme at the zoo which means he can see more of Antonina, or indicating his power over her by pointing out that the zoo and its animals may be needed “for the war effort – meat, firewood… soap”.

Unfortunately themes and metaphors are reiterated several times just to make sure we’ve really understood them, and cliches abound. They’re going to create a human zoo! And Lutz, the Nazi zoologist geneticist, and yes he’s a Nazi, wants to bring back a species of oxen so long extinct it is seen as almost mythical. By the way did I tell you he’s a Nazi?

The family’s personal story is gripping and the performances are good (there’s a lightness to Antonina despite the huge risks and constant danger; Jan is suitably brooding and doesn’t let the small matter of a huge war get in the way of his increasing jealously over his wife’s relationship with the far more powerful Lutz) –  though the accents don’t always work – with a cast from America and several European countries, everyone is speaking in rather random accented English.

The film is beautifully shot, with time passing as sunshine turns to falling leaves and then snow on the ground. Antonina has a wardrobe of lovely 40s dresses, and even more delightful nighties. And a fluffy bunny gives even the bouncing camel a run for its money.

Where The Zookeeper’s Wife really works is when the story moves to the Warsaw ghetto, a place where young girls are casually raped by German soldiers who then continue their patrols, and Jan is asked not to take all the vegetable peelings for animal feed as they are needed to make soup – while outside, up against the wire gates, locals take photos of themselves.

But the most heartbreaking events take place as the ghetto is being emptied. Janusz Korczak, the director of the ghetto orphanage, is sent with his young charges to the railway station, where Jan finds him. As Jan speaks urgently to the older man, the children hold up their arms for him to lift them into the cattle wagons. Raising one’s arms is what we do when we need rescuing, but these children are smiling as they don’t know that they need saving. Korczak has told them about a lovely place they’re going to, as even if it is too late for rescue at least he can save them from fear. And it is too late for rescue – “Pray for us” says Korczak to Jan as he too climbs into the cattle wagon.

Later soldiers torch the piles of little cases and bundles left behind at the station and no longer needed. (In real life Janusz Korczak – a well-known paediatrician and children’s writer – refused sanctuary offered to him and instead stayed with his young orphaned charges. All of them, from the elderly Korczak down to the tiniest toddler, disappeared into the gas chambers of the Treblinka concentration camp).

Inevitably The Zookeeper’s Wife suffers in comparison to Schindler’s List. Schindler was a more complex character than Antonina or Jan but there are still parallels – particularly that sense of urgency verging on recklessness as they attempt to get just one more person to safety before the net closes in.

And despite this film’s relative lack of heft, there is still a whole lot to admire and also to enjoy about The Zookeeper’s Wife – and not just as yet another warning from history about what happens when you allow whole groups to be othered.

I just wish that we didn’t still need warnings from history, and also that each succeeding generation wouldn’t start out assuming that we don’t.

buy The Zookeeper’s Wife on amazon video from amazon uk

Buy / rent The Zookeeper’s Wife on amazon video, dvd or blu-ray from amazon.com