You are here: Home / Film Reviews / The Third Murder 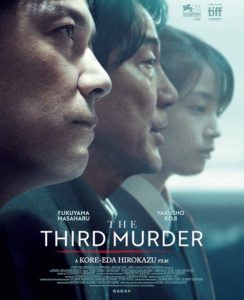 This is a murder mystery with more twists than a 1960s dancefloor. It’s definitely gripping, and superbly acted, though I’ll not deny it is also frustrating; as we try to work out who in the movie is being played before the realisation hits that it could well be us.

A man has been murdered on some scrubby brushland by the river. We see the killing more than once (with different protagonists), as the bright lights of the city glare from the opposite bank. The body is destroyed with gasoline, leaven a large cross-shaped burn on the ground. Misumi (Yakusho Koji), who worked at the victim’s factory, has confessed to the murder. he’s already spent decades in prison for a previous murder, and now he could be given the death penalty (the third murder of the title, I’m guessing).

There’s no evidence beyond his confession, and an email supposedly from the man’s wife offering money to Misumi.

Enter Shigemori (Fukuyama Masaharu), a rather careworn lawyer, who takes on the seemingly open and shut case, but which shines a light on just how many of those people meant to administer justice seem to have lost their way in the behemoth of the legal system, increasingly locking out any notion that guilt or innocence might actually matter.

Add in an accused who could be the victim of a miscarriage of justice or a cold-hearted killer, or something in between, and the stage is set for a three cornered battle of wills – in the courtroom, prison cell, and lawyers’ offices.

Much “legal strategy” is harnessed, as they debate how to play Misumi’s defence. He’s changed his story numerous times – sometimes he’s the murderer but his motivations change. He’s given different accounts to different people, even blaming the factory owner’s wife claiming she paid him to murder her husband. The factory was mislabelling food and he was in on it; the victim was abusing his daughter, so Misumi had to help her. If he even did it at all.

We see the victim briefly in the murder scenes but then only in a framed photograph his wife brings to the courtroom. This is all about him, and his true nature is revealed throughout the movie, but he barely appears.

Misumi’s motives for his changing story are complex. it seems most likely that he prefers to snatch back some kind of control even if it means death. “People’s lives get decided for them” he ruminates, and though he could have avoided all of this by never killing anybody in his life, he’s certainly a tiny cog in a huge machine, with the most to lose.

Once the fog (sort of) clears, it’s obvious this is a meditation on the Japanese justice system, including the “did he / didn’t he / if he did why did he” twists and turns.

But the film is also about family relationships. All three of the men in this story – Misumi, the murder victim and Shigemori – have been to a greater or lesser degree poor fathers to their daughters. Misumi is estranged from his thanks to his 30 year incarceration for the previous murder. She had a damaged leg, the same disability as the victim’s daughter Sakie (Hirose Suzu) who he has befriended. Shigemori is divorced with a daughter, and comes across as an unconsciously neglectful father, burying himself in legal cases to avoid his responsibilities. The murder victim is the worst of the lot.

There are some shocking moments among the blind alleys, twists and turns, made more horrific by the bare institutional prison and courtroom, and Ludovico Einaudi’s extraordinary score, which manages to combine melancholia and melody without ever descending into melodrama.

Despite the high stakes it would be easy for The Third Murder to be, well, a bit dull, and it does occasionally feel stagy. But the performances take it out of the confines of cell or courtroom. Masaharu is excellent as a man forced to rethink everything every five minutes, upsetting both his quest for justice and his slightly lawyerly arrogance. Koji had me changing my mind time and again about Misumi, who goes from cuddly old murderer who has paid his dues to someone terrifying (or possibly not! I’m still not sure).

Suzu is excellent as Sakie, a lonely but self-possessed teenager whose news blows people’s original assumptions out of the water, but who also brings her own complexities.

I’ll admit I had no idea Japan still retained capital punishment beyond, say, those cases where it’s been left on the statute book for wartime treason or something like that. Which makes the stakes in a film like this much higher. (You’ve probably guessed by now I’m not a “hang ’em and flog ’em” person, though despite – or possibly because of – that, I do have a fondness for movies with a suitably satisfying revenge ending).

This is a film set in institutions, from law courts to prisons to kitchens, so the scenes often look bare and functional. The courtroom drama contrasts with the two-handers between Shigemori and Misumi. Sometimes they’re literally held apart with a glass barrier, the screen between the two men pitted in its centre with holes for hearing what the other is saying. Other times reflections in the glass are used so as one man speaks the other is seen next to him, slightly blurry, his expression changing as the realisation of what he’s being told is sinking in.

And I have no idea if this was deliberate, but at one point the multiple partial reflections of Misumi, layered on top of each other because of a trick of light and shadows, make him look like Hannibal Lecter with his spiked mouth guard. The two have little in common – Misumi may be a killer but he doesn’t appear to be a psychopathic, torturing, natural born killer – but as the film progresses it becomes less clear if Misumi is marionette or puppeteer.

But it’s still frightening how little a man’s life is worth in the judicial system, when the judge’s main priority seems to be finishing the case on time.

Watch the trailer for The Third Murder: