You are here: Home / Film Reviews / The Third Man 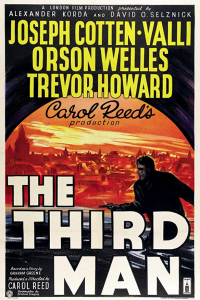 I never thought I could be so enraptured by sewers, but Vienna’s are particularly impressive.

Vast caverns running with water, spiral staircases, huge underground open spaces like cathedrals, with darker brick tunnels running off across the city and towards the Danube – the network beneath Austria’s capital is a perfect metaphor for the underground nature of post-war Vienna above ground too.

Racketeer Harry Lime (Orson Welles) is a case in point: remaining hidden from view, though everyone knows what’s going on and plenty of people are using him.

Above ground is a mix of vast, genteelly-fading buildings and enormous piles of rubble as the city tries to get back on its feet. Vienna is divided into four areas, controlled by the Soviets, Americans, British and French. And while life goes on, it’s a bleak existence where its residents seem to have forgotten the rules and codes of society. People admit to acting in ways they’d never have done before the war; criminality is often a way of life, as people wonder how deep to wade into the city’s sleazy mire. Its residents, on papers genuine and forged, are damaged and ground down. 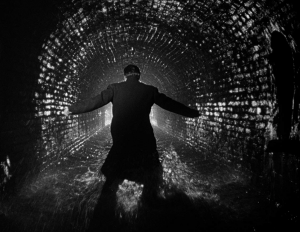 Directed by Carol Reed, from a screenplay by Graham Greene, The Third Man digs down into a seedy underbelly. Bright lighting contrasts with urban landscapes of dark shadows and darker figures (cinematographer Robert Krasker won an Oscar for his work at the 1951 ceremony).

The title refers to an extra person seen carrying the apparently dead Lime to the side of the road after being knocked down by a car. It’s a revelation to Holly Martins (Joseph Cotten), writer of pulp western novels and friend of Lime, as he is sent this way and that in his investigations, winkling out differing accounts of how Harry actually died.

Lime has been a black market success story, and has invited Martins to Vienna to work with him. From the start Holly is an ambivalent character, neither hero nor antihero, another man out for what he can get.

Arriving in Vienna, he discovers Harry’s death. The British Army, and in particular Major Calloway (Trevor Howard) are initially just relieved Lime is out of the way. Calloway wants Holly gone too, and prepares to send him back to the US, though a hastily acquired invitation to Holly to speak to the British Cultural Association in the city means he gets to hang around a little longer.

From the first he’s hearing different stories and apparently eye-witness accounts from people on the ground; as he works his way through Harry’s shady friends and meets Harry’s lover Anna (a beautifully guarded Alida Valli), layers are peeled back to reveal a man Holly realises he didn’t know at all. (German is often spoken but there are no on screen translations, meaning those of us who don’t understand the language are as in the dark as Holly.) 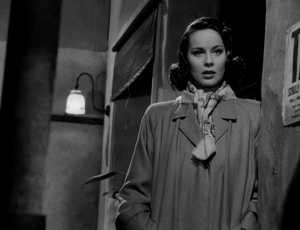 Anna is an ethereal beauty dressed in the plain clothes of an austere post-war existence. The only glamour is on the stage, where she and two other actresses play Regency ladies in intricate blonde wigs and beribboned, frilly dresses. Everyone wants to forget the past even as they are still living it. “Comedy! I don’t play tragedy” she tells Holly when he enquires about her next role. Anna’s apartment is high-ceilinged but fading, her stockings and underwear hanging on a string tied across the room.

By contrast when Holly visits Harry’s friend Dr Winkel, he finds a cluttered apartment stuffed with religious imagery and icons.

Vienna feels empty in every way. Streets are deserted day and night; apart from Harry’s dodgy friends, a few British Forces personnel, Holly, Anna and a small boy, there’s a cat and a parrot and that’s about it. A fairground where Lime and Holly, in that famous scene, take a turn on a ferris wheel, is empty but not abandoned. No one has any money for frivolities any more.

Even before his reappearance, Harry hovers over everything. When he does come back, not dead after all, he’s a figure shrouded in a dark doorway. Welles is chilling as the charismatic, charming and sociopathic Harry, a man gradually revealed to Holly as someone who will stop at nothing to make money.

Later, en route to the airport, Calloway takes Holly round a quiet and calm hospital ward of children dying of meningitis thanks to Harry’s scheme. Lime hasn’t just been selling dodgy watches or ladies stockings; he’s been stealing penicillin and watering it down before selling on.

The Third Man may be dark but it’s also often witty, particularly in its famous zither score, by Anton Karas. The Harry Lime Theme is bouncy and folksy; at other times the music is haunting and melancholic. It’s both a link with Austrian’s past and a break with its glittering pre-war ostentation. 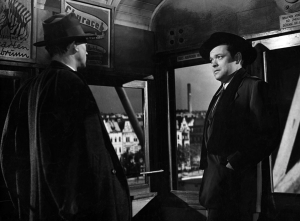 The world Harry exists in is bigger than him though, a part of life for traumatised and broken cities. Characters are players in a mystery with its roots in the dark, a resurgent way of life that is always around in some form, expanding and contracting but waiting to ooze through the cracks in society.

In the gloom and semi-darkness, characters become almost cosily identifiable by their familiar shapes: Calloway in his duffel coat and cap; Holly in his trilby and boxy, cuboid overcoat; Harry in his dark coat and black hat.

Those sewers become the venue for a final showdown as Harry is pursued through the tunnels, past dripping brickwork, looking for a way back up. It’s an iconic chase, and a desperate one.

By the end, Holly is leaving a Vienna that is still full of people scrabbling for footholds. The war has exploded the old ways, and roles, into the air – and wherever people fall they have to find a way to make post-war life work for them. Its gloss has gone, and even the film’s close implies there are no happy endings.

Watch the trailer for The Third Man: