You are here: Home / Film Reviews / The Souvenir

An 80s-set coming of age story, The Souvenir charts a woman trapped in an emotionally abusive relationship, increasingly desperate to find her voice as disparate forces buffet her, for reasons malicious and benign.

Writer-director Joanna Hogg’s film is a classic example of how a toxic relationship can mark us for ever; though as its young, filmmaker protagonist is so privileged it also raises questions about finding one’s voice only to use it to tell the stories of people who maybe should be telling their own. 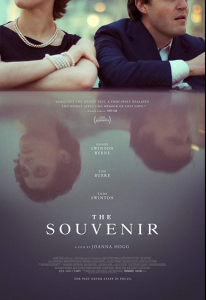 Julie (Honor Swinton-Bourne) lives in her family’s Knightsbridge flat while she attends film school, mum and dad remaining tucked away in their large detached house in the country. She is earnestly desperate to make a feature film about a boy’s life in Sunderland, though more as a way for her to step outside her privileged bubble than for anyone else. And if there’s one thing class privilege gives you, it’s confidence.

She subconsciously gets to the nub of it early on, saying of her characters – after a lot of abrasive probing from new boyfriend Anthony – that “I am designing new ones to fit what I want to make”. Anthony (Tom Burke) is nearly always dismissive of her work, undermining and putting her on the back foot, but his harsh questions also make her justify her project.

Her ideas for her film change over the course of The Souvenir, outside forces (sometimes necessary ones) driving out her own ideas.

Julie’s relationship with Anthony defines her and changes her. The title refers to a painting by Fragonard which he takes her to see at the Wallace Collection, of a Regency woman carving her lover’s initials into a tree. And for Julie, like the rings of a tree marking our lives into standard, expected sections, one is now damaged, a permanent reminder of what she’s been through.

However much Julie’s wealthy naiveté differs from the audience’s, her relationship with Anthony will resonate with many. They change us, making us more wary – and even if we don’t want to admit it, someone else has shaped our stories.

Though both the main players in Joanna Hogg’s The Souvenir are manipulative in their own ways, both are, at times, sympathetic: 20-something Julie, tentative and shy, way more so than Anthony of course, though I’m not sure he’s deliberately creating new characters out of the women in his life to fit what he wants to make. He’s so messy it’s hard to know if he’s a cruel person or one who has become cruel through addiction and damage.

Anthony, in his striped double-breasted suit and flamboyant bow tie, his braces and his champagne dates in elaborate hotel drawing rooms, is dismissive of Julie from the start, his attention always partly elsewhere as he sits slightly to one side.

Despite the trappings of wealth (he supposedly works at the Foreign Office though we have no proof of that) he borrows £2 from Julie that quickly becomes ten ”just in case”, that ten pounds then fixed as the standard loan as he disappears out of her door. (Julie, in turn, is borrowing from her mum, telling her it’s to rent equipment for her film.)

Julie’s life has been as sheltered as it is privileged. At a dinner party, when Anthony briefly leaves the table, his friend Patrick (Richard Aoyade) asks the question that has been baffling their friends. How can two people so different – “habitual heroin user, trainee Rotarian” he describes them as – get on? You could cut the atmosphere with an inherited silver butter knife as Julie’s cluelessness becomes apparent.

While Julie is desperately trying to find her voice, in her films and her relationship, her mother Rosalind (Tilda Swinton, Swinton-Bourne’s real-life mum) lost hers years ago thanks to a marriage where she is seen as stupid and vapid. For me, Rosalind is the soul of the film, a warning to Julie as well as her protector. She fusses about, chatting about nothing, because when she tries to talk about something seen as important, her husband (resplendent in gentleman farmer garb of red trousers, jumper and tweed jacket) shuts her down.

She’s much more of a presence than Julie’s father though, who like many upper middle class men communicates with other men via one-sided discussions about Oxbridge colleges attended or avoided. Ironically Rosalind also has the most devastating line in the film (two words, actually), because of what she doesn’t say.

Both leads are excellent, and both characters are flawed and fumbling. Swinton is, as usual, superb.

The dialogue is naturalistic, which adds to a sense of nothing much happening while a woman fights the unravelling of her life (not unlike real life). At other times it’s all incredibly mannered. The staging is often play-like, the rooms three plasterboard walls open to the audience on one side. In Julie’s flat the positioning of the furniture reinforces this: her tiny bedroom with its queen-sized double, and dining room with its small circular table, the furniture entirely central. At one point Julie and Anthony stand facing each other on opposite sides of the bed as if a marital farce is about to begin.

When I started watching The Souvenir I didn’t realise it was a period piece, which shows how many of those fashions are back in and the issues raised always with us. The choppy, curly “Fleabag hair” that we called a wedge; loose fit jeans, checked shirts. The dinner table conversations about terrorists discuss the IRA, and a bomb explosion near her flat (the 1983 Harrods car bomb) place it exactly. Julie’s later outfits also give the time away. Not everything comes back in style, and for a good reason – the collared blouses under thin cashmere jumpers, so beloved by the sixth formers at my all-girls’ school in the mid-80s, place it, for me exactly.

The soundtrack comes and goes, silences punctured by occasional 70s and 80s hits. Their titles sledgehammer-like, they are all the more welcome because there are so few: Robert Wyatt’s Shipbuilding, Joe Jackson’s Is She Really Going Out With Him, 2000 Miles by the Pretenders.