You are here: Home / Film Reviews / The Seagull 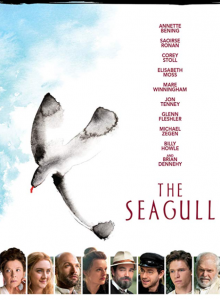 To Irina, a famous actress, all the world’s a stage, its boards to be trod only in full make-up and costume.

Yet she never looks more youthful or more happy than the one occasional we see her face naked, rich auburn curls snaking down her back, as she rushes from her bed and her younger lover Boris to the windows – the light streaming through her now-transparent white nightdress (I wish film credits listed where to buy the outfits. I’d much rather hang around for that rather than umpteen extra scenes).

I liked Irina a lot. She’s convinced her nature and love of work has kept her young – probably true, though she’s rather deluded as to just how young. But she’s sparklingly funny, and tasks herself with entertaining everyone else (though when she wants to be entertained everyone else must comply). Irina doesn’t care if her comments wound but she’s not malicious. If anything, she’s a breath of fresh air in this enervating atmosphere where unrequited love is draining the household of energy.

Nearly every character in The Seagull is in love with someone else. Masha loves Konstantin, who loves Nina, who loves Boris. Irina loves Boris. Boris loves himself. Paulina, Masha’s mother and the wife of the estate manager, loves the handsome Dr Dorn. Everyone is rushing around looking for the object of their affection, or listlessly wafting round the estate, mooning over each other.

Michael Mayer’s film starts at the end. The status quo appears to been re-established, but in a battle between two women neither have won. Meanwhile most of the men have survived unscathed, their lives carrying on very much as before. And the real villain of the piece has got off scott-free.

Set on a Russian aristocratic estate where everyone speaks in American accents – one of those idylls with servants, umpteen hangers-on, a mercurial hostess and no money – the woods, lake, and elegant rooms witness constant minor skirmishes.

Yet despite the characters’ jostling, and some excellent performances, this is a rather too comfortable watch.

Irina (Annette Bening) has been summoned back to her elderly brother Sorin’s home outside Moscow as his health fails and death approaches. Accompanying her is her younger lover, the writer Boris Trigorin (Corey Stoll).

Her son Konstantin (Billy Howle) lives there too. As he plays the piano in the dying evening light, he sees a dishevelled woman at the window. It’s Nina (Saoirse Ronan), whom he used to love until she left him for Boris and the lure of the stage.

Rewind two years and we’re again at the estate for the summer. Sorin (Brian Dennehy) doesn’t seem to like it much, claiming he’s been miserable for a decade.

Konstantin writes experimental plays and trashes the current Moscow theatre scene as trite and cliched in an attempt to get his mother’s loving attention (something he manages later when he shoots himself but merely grazes his head).

He stages his latest deeply symbolic work outside by the lake in darkness. Nina has the starring role. But most of the audience is baffled and it finishes early. Nina is praised and toys with becoming an actress. But she’s dazzled by the idea of theatre without thinking about its realities. Boris praises her intelligence but he also teases her and she never realises it: “I enjoy watching you. You are… sincere” which is one way of saying someone wasn’t very good.

Irina is a whirl of suppressed emotion as she tries to manage the Boris-Nina situation, and Bening is exceptional. Those crinkly eyes like pools of sadness, and that deep, almost-trembling smile give her a head start when it comes to putting on a brave face. When she realises that Boris has set his sights on their young neighbour, Irina knows she has to win him back and take him away. Her actions look automatic, as if she’s done this before.

Even with Bening and Dennehy in the mix, relatively minor characters shine. Elisabeth Moss is superbly entertaining as Masha, a black-clad, drinking, smoking 28 year old who haunts the house and gardens like a particularly bad-tempered, stomping spectre. She doesn’t do much but she’s bitterly funny as she pursues the oblivious Konstantin. And schoolteacher Mikhail (Michael Zegen) wanders around bemoaning to the clueless privileged what it’s like to be an underpaid teacher (to them, he too may as well be a ghost as they sweep past, his words ignored).

One scene that Bening and Dennehy have together, just the two of them, is fabulous. Irina and Sorin joke and argue and discuss in the way that only no-holds-barred siblings can.

Irina is a survivor. By turns capricious, girlish, cutting, and hard-working, she’s also sometimes too believing of her own myth. She’s easy to blame, putting herself first. Even at the very end she’s acting, suppressing from her own mind what she knows to be true when what sounds like a gunshot is soothed away as an exploding bottle.

But it’s the sly Boris who wreaks destruction on this group, smoothly manipulating them and leeching off their troubles as he steals their personalities for his own characters. He has it made, yet still destroys three people.

Poor Konstantin, underneath his self-righteousness and superiority, just wants to make it as a writer. Boris undermines him perfectly. Bringing a magazine with him to the house with Konstantin’s story printed in it, he hands it to Konstantin as a peace offering then happily admits he hasn’t yet bothered to read it. At one point Konstantin’s lack of power combined with his inflated sense of importance leads him to challenge Boris to a duel.

There’s some brutal humour. Near the end, when Irina and Boris return to the estate, he spies Masha, now wed to the schoolteacher. “You’re married” he says. “Yes” she replies. “You’re happy” states Boris. “I’m married” she deadpans back.

There’s plenty to enjoy here. The performances, the wit, the dresses, the belt-and-braces approach to headwear as fancy hats are further shaded with elegant parasols; but there’s a superficiality that seeps through the brittle laughing and easy-to-spot manipulations. It does feel as if everything is being performed loudly for us.

But it has given us, thanks to Dr Dorn, the perfect description for those times when a conversation just stops and everyone sits around looking embarrassed and trying to think of something to say: “the angel of silence has just flown over”.

Buy the seagull on dvd or blu-ray from amazon uk

rent / buy the seagull on vod or buy the dvd from amazon.com