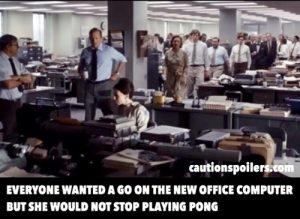 “The first rough draft of history” says Kay Graham, quoting her late husband Phil about the news. Phil killed himself years before, leading to Kay taking over the reins of her family’s newspaper, The Washington Post.

Set in the early 1970s, director Steven Spielberg’s latest, The Post, is about events that will be much more familiar to US audiences. Luckily the movie doesn’t assume prior knowledge, though there are a lot of middle-aged male journalists in suits and rumpled shirts to get your head round (just remember that the important ones are called Ben).

Katherine “Kay” Graham (Meryl Streep) is the publisher of the venerable, and vulnerable, Washington Post – a family business. Edited by Ben Bradlee, the newspaper focuses on quality journalism, though it’s losing women readers and is currently trying to grab the big political scoops while at the same time covering the president’s daughter’s wedding (intrigue-ridden in itself, as Post journalist Judith Martin has been banned by Nixon from covering the society event after she crashed the reception of his previous family nuptials).

At the same time the newspaper is going public, though Katherine is determined that the family, not the institutions, retain control. But despite her claim that quality journalism leads to rising profits, the company’s cash cows are their TV stations.

They get their wedding pictures, though unfortunately that same day the New York Times manages to splash its front page with the first in a series of devastating articles by top writer Neil Sheehan, who has obtain classified government documents (“the Pentagon Papers”) that clearly show successive presidents have misled the American public about the success of the Vietnam War, while sending more and more soldiers to fight.

But after those first shocking headlines, the New York Times is serve with a temporary injunction. So it falls to The Washington Post’s Ben Bagdikian (Bob Odenkirk) to track down the papers  – “7000 pages detailing how the White House has been lying about the Vietnam War for 30 years” as Other Ben (Bradlee) says – and, if possible, publish. No mean feat when the pages are unnumbered and mixed up, the lawyers are twitchy, and the bankers are getting nervous.

The stakes are as high as they could be. The Washington Post’s deal for going public has a one week window where investors can pull out; and nothing makes them as jittery as a president threatening jail time. The downfall of the paper is a distinct possibility.

But the dithering over the will they/won’t they publish means there’s time to show us the newspaper presses and tiny typesetting being prepared, a fascinating craft from the past.

Streep and Hanks are extraordinarily good. The partnership between the convention-bound Kay and driven, newsroom boy Bradlee is so natural that every conversation, as they spar and discuss and interrupt, is a masterclass (and an absolute joy to witness).

Insulated by her wealth, discriminated against because of her sex, Kay is confident among her social circle, frustrated by the misogyny she experiences and also diffident about her comparative lack of business experience (though that diffidence means she’s always far better prepared than the men).

If the topic wasn’t so serious I’d say there was something of the 1950s comedy heartthrob about Hanks, whose character’s stress levels can be measured by how floppily low his fringe hangs at any point during the day.

The film is set during a time when the old is crashing up against the new. Women are still held back, yet Kay had thought it completely natural that her husband be gifted the newspaper by her own father. Now the only woman around a huge boardroom table, this is her first job.

Men push in front of her all the time. At that crucial board meeting, her rehearsed line that “quality and profitability go hand in hand” is said by her colleague before she can get a word in. The share price is set lower than expected, a difference overall of $3 million. Asked to equate that to journalists’ jobs Kay clearly says 25, only for a man to then be asked to work it out, coming up with the same answer. At a dinner party, after a cheerful evening of good food and political anecdotes, all the women, including Kay, leave the men to talk business and politics while they go into the drawing room and chat about clothes.

Kay’s wealth mean she’s moved in exalted circles for decades. These are her people – and by that I mean both sides. So there’s a disruptive seam running through the movie as Kay and Ben accuse each other of being too close to the very people they should be holding to account. Kay has been friends with presidents and their wives for years. Bradlee too has been invited into inner circles. He claims to have pulled no punches despite these fraternisations: “”hard to believe you’d have got all those invitations if you didn’t pull a few punches” she retorts.

The joys of 70s-set films are dial phones (politely asking to borrow them several times a day, listening in to important conversations on kitchen extensions, finding coins for payphones), smoking (everywhere, constantly), and the clothes.

I’m not really interested in 1970s men’s office wear. The women’s wardrobes are a joy though. Graham favours rather dowdy daytime dresses in those classic 70s colours of brown, beige, and browny-beige, but her evening and nightwear is stunning, from the blue satin nightdress with the white broiderie anglaise trim, to the white and gold kaftan she wears on the night she has to make that decision.

God knows how much hair lacquer the wardrobe department got through, and what with the near-constant smoking I was terrified there would be a huge explosion on some poor woman’s head.

At just under two hours The Post feels positively snappy, in this era of well-meaning films that amble on for 30 more minutes than strictly necessary. But it’s truly gripping and never outstays its welcome.

The only problem is that some characters are fleshed out enough to provide tantalising glimpses but no more. I’d have loved to see more of wedding crasher and journalist Judith Martin (Jesse Mueller).

Where the movie excels is in its portrayal of both the relationship between Kay and Ben, and the fast-paced turn-on-a-sixpence nature of an old-style newsroom, with its adherence to its values as a voice for the powerless. And it shows how the temptations of those dazzling invitations from the great and the not-so-good have always been, and will always be, a threat to journalistic integrity.