You are here: Home / Film Reviews / The Personal History of David Copperfield

There is little to criticise in Armando Iannucci’s pacy, exuberant, free-thinking and hilarious film, though as a keen baker I had to turn away when faced with Uriah Heep’s mother’s “heavy cakes”, a seemingly never-ending procession of giant overcooked monstrosities with which England’s dark satanic mills could easily have been built. 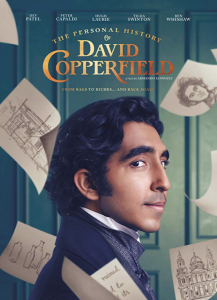 Beyond those inedible indelicacies, we are given a multitude of riches. Dev Patel is a joyous David Copperfield, an endearing mix of gaucheness and enthusiasm tempered with self-doubt about his place in the world, who eventually finds that thanks to his kindness and good nature, a world of good luck comes to him. (Patel is also a gifted physical comedian. In a role about a man who doesn’t really fit in, he’s often banging his head or falling, seemingly too big for the space society has allocated him.)

The film delves deep into identity and belonging, with class taking something of a back seat (though that – and money – are still there).

Several characters, whether cushioned by wealth or not, are troubled, the film shows sensitivity when exploring trauma and mental illness. David’s life has been one of emotional and financial security repeatedly given and snatched away; his school frenemy Steerforth (Aneurin Barnard) has a mean, classist streak hiding his misery; Betsy Trotwood’s accountant, Mr Wickfield (Benedict Wong) is an easily-manipulated alcoholic; poor Mr Dick (an excellent Hugh Laurie, haunted by sadness) is often overwhelmed by intrusive thoughts about the beheading of Charles I, requesting that friends check his own neck is still attached to his head.

They try to cope in different ways. David tries to emulate the traits of others to get ahead, enduring almost everyone getting his name wrong through carelessness or mockery; Steerforth mocks and belittles, before running off with, then abandoning a young woman; Mr Dick simply scribbles more and more to try to outrun his own mind.

In fact, the truly privileged in the story could be those entirely confident about their own worth. Uriah Heep (Ben Whishaw), the Peggottys (Paul Whitehouse and Daisy May Cooper), Agnes Wickfield (Rosalind Eleazar) and Betsy Trotwood (Tilda Swinton) are all at ease with themselves, whether or not they feel they have been justly treated by life or other people. 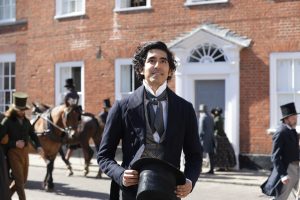 David Copperfield (its full title is considerably longer than even the film’s) is a book about a writer, and is often called Dickens’ most autobiographical novel.

David has a gift for mimicry, and picking out those sayings that most define a character. He’s always writing, scribbling down notes about the people around him who make up his own life story. This is his story as written by him, and the film starts with him presenting it from a lectern on a London stage.

A happy little boy, he lives with his widowed mother Clara and their housekeeper Peggotty; until Clara marries the abusive Edward Murdstone (Darren Boyd, who seems born to play tall, scary Victorians) who then installs his equally miserable sister Jane (Gwendoline Christie) in the family.

Together they cast a grey shadow over the formerly happy house, and it’s not long before David is sent to London to work in one of Murdstone’s bottling plants. He’s there for years, while living with the always-indebted Mr Macawber (Peter Capaldi) and his growing family, until Clara dies.

Throwing himself on the mercy of his only living relative, David moves in with Betsy Trotwood, where he lives happily until he’s sent away first to school, and then to be a proctor for Mr Spenlow, whose chief attraction is his beautiful daughter Dora (Morfydd Clark, who also plays David’s mother). Though despite his talent for observing all around him, he is oblivious to the love Agnes retains for him.

At Betsy’s house, David is part psychologist, part companion and part donkey wrangler. Betsy’s phobia about them is made worse by the sheer number of donkeys which seem to frequent her front lawn, requiring much shooing of the beasts themselves and attacking of their riders. He also helps Mr Dick, whom Betsy has taken in at some point, giving him a safe space where his behaviours go unremarked; David devises a clever way for him to free his mind, flying a kite with Mr Dick’s scribbled thoughts attached to it. 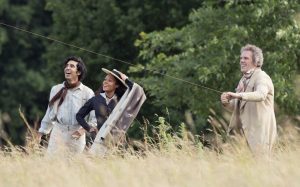 There are many gems among the performances, and it’s testament to both the performers and Iannucci’s direction that none overshadows another, and all feel fresh.

Ben Wishaw’s Uriah Heep is mockable but mostly sinister, never the cliche of hand-rubbing obsequiousness we might expect. He uses people, leveraging their kindness or politesse to get what he wants, while creeping around like Nosferatu with an unfortunate haircut.

Tilda Swinton always seems to known when to make a character’s quirks central without overwhelming the story, and here she’s no different. Fussy and pernickety, Betsy has a heart of gold while also being forthright, a status for rich people that in anyone else would simply be considered rude: “did your mother sneeze at your christening?” she asks the bemused Peggotty upon hearing the servant’s name.

The colourblind / non-traditional casting works incredibly well, instantly making older, whiter period dramas look hidebound. Actors have been cast purely for their acting fit, and no character has been assumed to be white.

As well as Patel as David, and Ranveer Jaiswal as his younger self, Agnes Wickfield, her father Mr Wickfield, Pegotty’s foster son Ham, and Steerforth’s formidable mother are all played by people of colour. It’s still unusual in period dramas, where attempts to make casts more racially diverse have, in the past, often been limited to servant roles and extras. It means this movie feels as if it has broken out of its traditions, while keeping what is good – and reiterating what a universal story it is.

Although this personal history is heavy on laughs, there’s an emotional journey here too, that will resonate with anyone trying to find a place they fit best, with people who understand them. Though writers in particular may be brought up short by one character’s quiet insistence that David literally write them out of his story.