You are here: Home / Film Reviews / The Perfection 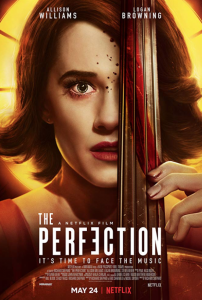 Considering its title, the symmetry in new Netflix thriller horror The Perfection – only fully revealed at the very end – is to be expected.

The trailer (below, which I’m going to assume you’ve seen) positions this as a straight-up horror, and Charlotte (Allison Williams) as a demented stalker, wielding a kitchen machete and with a deranged glint in her eye as fellow musical prodigy Lizzie (Logan Browning) screams at the bugs crawling out of her forearm.

Actually, though it has elements of gruesome horror (missing limbs) and psychological drama (Charlotte’s plotting), this is really a revenge thriller, though target and instigator are never as clear cut as you’d think – until they are, and then they’re not again. That’s not to say you won’t guess; some of this movie’s ideas have more signposts than a four lane roundabout. But they often come to fruition earlier than expected, before rewinding or leading off into different directions.

Overall, this is a sometimes bumpy and overwrought but always entertaining ride.

Charlotte was a child prodigy, a cellist sent to the renowned Bachoff Academy of Music to further her craft, until her mother’s illness meant she had to return home. Ten years on, her mother dead, Charlotte is now finally free to pursue her music-related ambitions, even if they’re not what you expect.

She reconnects with the academy’s owner Anton (a creepy Steven Weber) and his wife Paloma (Alaina Huffman), who invite her to Shanghai to judge a competition between three talented young girls, the prize being a place at the Academy in the US.

Arriving in Shanghai, Charlotte sees Elizabeth Wells (Logan Browning) on a giant hoarding, living the life that should have been Charlotte’s. Lizzie replaced Charlotte as the star pupil at the Bachoff school, arriving aged 9 the same day the 14-year-old Charlotte was leaving to care for her mother.

Lizzie, a fellow judge, is now successful, rich and famous, playing her cello all round the world. When the two meet Lizzie instantly takes charge of their quickly burgeoning friendship, though they both fangirl from the off, their connection supposedly instant – and after spending the night together they go travelling, despite Lizzie feeling off-colour and news of haemorrhagic fever near the border.

Their bus journey descends into a vomit-stained nightmare, with Lizzie’s debilitating symptoms ricocheting between disgusting but familiar, and terrifyingly supernatural. The driver throws them off in the middle of nowhere and drives away, just before Lizzie’s arm starts to pulsate and creatures crawl out from under her skin – which is when Charlotte reveals she’s brought along that machete. But this shocking incident takes place well before the end, and having started at the Academy, that’s where we return.

It’s back in Boston that The Perfection moves into thriller territory (though it’s still reassuringly bloodthirsty). What’s revealed about the Academy isn’t really surprising, even in its ugliness – plenty of horrific fiction works precisely because its inner truth comes from the real world. The style of the movie also changes at this point, becoming more ornate and lurid, a contrast to the Academy’s horrible but predicted history.

The Perfection juggles its genres, moving swiftly through them to keep us guessing, with a denouement that mixes savagery with elegance. I liked the film’s different uses of fear, from Charlotte’s supposed craziness in the empty Chinese countryside to Anton’s academy – elegant, snow-covered, and increasingly sinister.

At times it feels clunky, and when you think about Charlotte’s terrible actions, and what they lead to, it makes little sense in terms of consequences. Then again does it need to, if her desired end result is, eventually, achieved? Overall the film works well, keeping us on our toes even as we’re watching through our fingers.

Williams and Browning are both excellent, finding what is real in these characters even as we discover they are products of the academy’s unreal, forced environment; nuanced even as the twists mount.

Their instant friendship realistically sizzles with need and delight, though Charlotte’s motivations are always suspicious. Both actresses bring out their characters’ complexities – it’s actually Lizzie who first displays a talent for understanding a situation, noticing what is going on in plain sight but which others miss, when she picks up that the mum of one of the competition students and the dad of another are having an affair.

Williams – playing the part of someone playing a part – is scarily focused as Charlotte, who turns to her own advantage the teachings of the academy: single-mindedness in pursuit of a goal, and an acceptance of what must be endured to get there. Charlotte plots her Shanghai visit to perfection, cold rage infusing every step, her nerve astounding.

Browning is masterful – as Lizzie, confident, observant, accomplished and sensual, loses all her agency when she falls ill on the bus. Her fear as the pain and indignities mount is raw and heartrending, but this is only the start of her unforgiving fall from on high.

The Perfection raises lots of questions about Charlotte. Half way through, the conundrum “what is she?” is replaced by “how did she get this way?” and “why is she doing this?”.  The interesting things about Charlotte are around her motivation and her targets – the “why” not the “what”.

This is a bold film that’s never dull (there isn’t time for it to flag, coming in at about 90 minutes).  And though the twists and turns are numerous, everything is satisfyingly revealed.

Its shocks don’t always work, and the literal reversals feel unnecessary. It’s easy at those points to work out what’s actually happening, and more interesting is thinking back to the assumptions we made – for example, that her mother’s illness was the grey cloud when it may have been the silver lining. But when director Richard Shepard does pull it off, his film works with an audacious, unblinking sense of delight.

And the Academy’s mantra, that its pupils must always do “what’s expected of us”, becomes a taunt to both the audience and to Anton.

The Perfection is now available on Netflix

Watch the trailer for The Perfection: