You are here: Home / Film Reviews / The Party 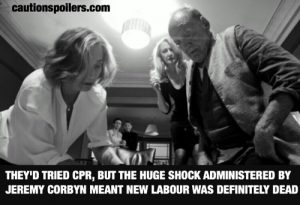 The Party is apparently Brexit-related, though it reminded me most of the Blairite years in the mid-1990s, before the 1997 general election swept them to power – those heady days when Labour supporters were in the main prepared to suppress their true political natures in order to get elected. Not so much out of cynicism (though that certainly came later) but through idealism, so they could do some good (god knows we needed it).

Set in one of those typical London suburbs so beloved of the quinoa- and cocaine-loving chattering classes, in a house that looks genteely shabby but would cost millions, Jan (Kristin Scott Thomas) is hosting a small dinner party to celebrate her elevation to Shadow Health Minister.

And with everyone trapped in those few rooms or the outside high-walled courtyard garden, individuals, relationships and expectations soon start their inexorable, spectacular, unravelling.

Though as in politics it’s the initially unlikeable, unclubbable, honest ones who turn out to be most popular in the long run among supporters and opponents.

Jan has single-mindedly pursued her parliamentary career, while her bearded and mostly silent husband Bill (Timothy Spall, a man for whom the word lugubrious must surely have been invented) has supported her in the way that clever men often support their successful wives, with rather bad grace.

To be fair Jan is seeing someone else, who continues to text her throughout the evening, leaving her giggling silently to herself as the messages arrive.

Bill has put his career aspirations on hold, turning down a professorship at Yale or was it Harvard (not even Jan could remember so I don’t feel too bad at mixing them up), but that’s something highly-qualified women have been doing for their husbands for decades with no comment.

Bug-eyed, mostly sitting on his chair in the middle of the living room, getting up only to change the record on his turntable, Bill proceeds to drop two bombs during the evening, in the way that sullen and somewhat bitter men are wont to do.

As Jan’s best friend April (Patricia Clarkson) points out, Dennis Thatcher and Prince Philip both trailed behind their wives and leaders, and it made me realise how unusual this still is (and how two of the best known examples are actually on the Right, or part of the Establishment).

Meanwhile in the kitchen Jan fields calls from press and friends as she bakes vol-au-vents in her pinny; according to April, proving like Margaret Thatcher that she can manage the domestic domain as well as potentially the NHS. (Vol-au-vents! How woman-of-the-people is that?)

April is acerbic and beautiful, convinced democracy is dead but happy to support her friend within the system. She’s brought along boyfriend Gottfried (Bruno Ganz), but regularly criticises him and his spiritual beliefs.

Martha (Cherry Jones), “a first class lesbian but a second class thinker”, is also there with the much younger Jinny (Emily Mortimer). Martha teaches a sub-sub-sub genre of gender studies and is unable or unwilling to make the sacrifices necessary for a family – Jinny is now pregnant through IVF with triplets, but Martha doesn’t seem to want to be a parent, referring to them as “three babies. People. Small people.”

And then Tom (Cillian Murphy) arrives. Gorgeous, expensively-dressed financier Tom, with a (literal) gun in his pocket and cheekbones so sharp he could use them to cut the lines of coke he sniffs off the side of Jan’s bath. Sweaty and jittery, he seems out of place among the other mostly older, left-leaning liberals.

He’s married to Marianne, a junior colleague of Jan’s, who will apparently be along later, perhaps in time for dessert (pudding, Tom, pudding! If you were really posh you’d know that, and you’ve already had to be corrected by April regarding the word lavatory).

It’s meant to be Jan’s night but other people’s big announcements keep taking precedence. Admittedly Bill’s (first) big announcement is that he is dying, though worse than that he saw a private doctor as his GP couldn’t fit him in. (“So how long have you got?” demands April, butting in over everyone else’s angst-ridden responses.)

Gottfried, up until now the outsider with his rather pointless sayings, finally comes into his own as atheist Bill asks the age-old question of those who won’t reach old age, “Why me?” Gottfried encourages a less medical approach: “doctors are not prophets” he says (or was it profits).

Despite their opportunism, when push comes to shove old allegiances still define loyalties: Martha was best friends and housemates with Bill at university; Marianne was his PhD student years later; April only seems to care for best friend Jan.

And it’s striking how much they all lack awareness of what could bring them down. Hubris or simply accepting the mores of their social and political class? Drugs in a shadow health minister’s house, a handgun in a wheelie bin, infidelity, and worst of all a private consultant for poor Bill’s medical tests as his GP couldn’t see him for two weeks. (I just hope Jan made her own puff pastry for the vol-au-vents.)

Without spoiling it for you, Marianne seems to be a metaphor for us fickle voters, transferring our allegiance and happily telling one candidate we support them before capriciously changing our minds (initially I wondered if she was some kind of enigmatic puppet-master in the mould of Peter Mandelson, though there was no mushy peas/guacamole mix-up at this party).

Sex, class and politics are a heady mix so The Party was always going to be a fun and funny romp. I don’t think there’s a duff performance, though Clarkson’s April steals the show with that combination of brains, not giving a shit, and sheer sexiness. It’s also refreshing to have so many older actresses (Mortimer is the youngest at 45), though everyone is white.

It is very funny in parts, mainly thanks to April. Her boldness and her one-liners (“tickle an aromatherapist and you find a fascist” she says about poor old Gottfried) are a breath of fresh air. Though I’m not a fan of farce and the movie does tip into that, with a dollop of melodrama thrown in.

The Party is a full-length film but a short one. And like those fettered parliaments that never have a hope of reaching the five-year mark, its central soiree starts happily on a wave of support and idealism but soon falls apart amid recrimination and lies.

It’s also in black and white – another comment on the idealism of New Labour before shades-of-grey pragmatism overtook them all?

buy / rent the party on amazon video from amazon.com