You are here: Home / Film Reviews / The Old Man And The Gun 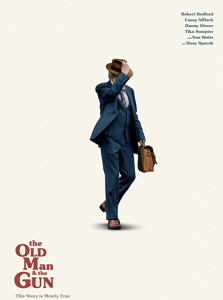 “This story, also, is mostly true”, says the title card at the beginning of David Lowery’s stylish and witty film, presumably referring not just to facts but also because it is clearly Forrest’s truth, that myth of a smart and courteous gentleman thief who still threatens his victims, terribly politely, with a gun.

The Old Man And The Gun is set in the early 1980s, and is based on a true story, written about in the New Yorker in 2003 by David Grann.

It’s by no means a frenetic film, in fact I’d hesitate to call it a caper. Despite lifelong bankrobber Forrest Tucker’s drive, determination and dedication to what is really a craft, it travels quietly.

Even his getaways are rather stately (or the tone of the film has left me remembering them as such), as if he knows he’ll manage to escape if he goes to prison so maybe it’s time to stop the car, put his hands up and take the sentence, if not the punishment.

But it feels rather soulless, its events unconnected as we move from one to another at the same unruffled pace, characters dropping out.

Maybe the point is to show that Forrest (Robert Redford) is – so far, anyway – truly committed only to robbing banks, and everyone else he gently and genially collides with will be a bit-part player in his life,  but it’s an exasperating watch.

Forrest meets Jewel (Sissy Spacek), after stopping on the highway to help when he sees her trying to fix her truck by the side of the road. They’re both over 60, the lines on their faces etching around hard-earned wisdom and got-lucky good looks.

The camera lingers on their sun-kissed faces and grey-blonde streaked hair; both characters have a sparkle in their eyes and the actors’ chemistry drives a warmly tender, though sometimes painful, relationship.

That first diner conversation moves imperceptibly from stilted talk – not really sure if they want to give what’s needed to tend this little green shoot of a friendship – to warm chatter, to silent decisions to move things forward. Every time Jewel disappeared I missed her, and the relationship between the two is far more interesting than that between Forrest and the man who wants to catch him.

Forrest is not a one man band. He has two accomplices, rather wearied but still on the ball: Waller (Tom Waits) who comes out with an extraordinary monologue about why he hates Christmas, and Teddy (Danny Glover).

Their supposed nemesis (though he’s too nonchalant for that term) is detective John Hunt (Casey Affleck); he names them the Over The Hill Gang and determines to catch them.

Hunt is initially so drained from night shifts spent picking up the pieces of society’s failure, it’s a miracle he can summon up the energy to do anything. Once he becomes involved in catching Forrest (after the robber has held up a bank so discreetly that Hunt doesn’t even realise anything has happened) it looks as if it’s going to become one of those “cop and criminal, forever linked” dynamics, but it never does. Hunt still comes across, with that mid-pitch monotone, like he’s half-asleep.

Forrest and John never create that tug-of-war tension necessary for their relationship to thrive; they never feel connected in a meaningful way. There’s a funny and fizzing scene in the gents’ restroom when Forrest pops in to see John, having spied him in the same diner, but overall their relationship has less of a spark than Jewel’s broken-down truck.

This is supposedly Redford’s last film, about a man who would never be able to claim the same, and there are some playful ideas linking the actor and his character. It’s not a “one last job” story though – it’s never the last job, hopes Forrest, at one point robbing four banks in a day.

He does it because it gives him life. He doesn’t really seem to mind if he’s caught, as it’s another chance for him to show his ingenuity in breaking out again (there’s a great montage of all his breakouts, starting with him shinning down a sheet from a reform school window as a teenager). It’s a life constantly alternating between crime and jail time, and it comes across as one of gentle ups and downs, a genial game between Forrest and the State.

There’s a fake romance that lingers around so-called gentlemen thieves, though actually despite the bank tellers who deal with Forrest telling the police later, often with bemusement, how courteous he was (“he seemed like a nice enough man”, “he was very polite”) they don’t look that enraptured during the heists. He has a gun after all. And it’s up to them not to do anything stupid. Perhaps it’s one of those situations that people re-work in their minds afterwards, once they know they’re alive. You don’t know he’s not going to shoot you until he’s left and you haven’t been shot.

Occasionally Forrest is forced (briefly!) to question his own niceness as a criminal, and our own buying into that myth. A carjacked woman looks terrified and points out to Forrest that she has a child in the back seat. He suddenly realises he can be frightening, and has been unthinking about the affects on his victims. Hunt visits Forrest’s daughter Dorothy (a terrifically moving Elisabeth Moss) who smokes her way through her description of him leaving their family. There almost seems to be a narcissism to Forrest’s myth-building, keeping his hat on even though it makes him more more recognisable not less.

The humour is gentle rather than belly laughs. (The signage on a diner, as he drives off in a stolen car, says “Lunch Special – That’s A Steal”!)

The Old Man And The Gun is an endearing and enjoyable swansong for Redford. It’s beautifully filmed with its yellow on-screen labels and 70s/80s graininess; and its montages of prison escapes and robbery victims baffled by what has just happened are great fun. But the main feeling it aroused in me was frustration.

Watch the trailer for The Old Man And The Gun: