You are here: Home / Film Reviews / The Nutcracker & The Four Realms 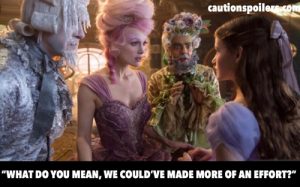 However enticingly tasty they look, too much refined sugar and clotted cream can give you indigestion, and coming out of the indulgently sweet Nutcracker And The Four Realms what I really wanted was a couple of Rennies.

Like the toy soldiers that the villainess brings to life in their droves before the climatic battle, this is hollow inside. And at times there was, despite the excellent production values, something rather school play-like about the whole affair, particularly the acting.

Children will love it though, which is no surprise when you consider how many sweet treats they can consume at Christmas and Halloween with no ill-effects. I took my 9 year old son, whose usual favourite things are outer space and Wimpy Kid books, and he thought it was fantastic. And as everything is explained in actual words lest we don’t pick up the visual cues, younger children will probably enjoy it too (Clara herself has an unfortunate habit of explaining to her opponents what she’s going to do next).

It also never outstays its bouncy, colourful welcome, coming in at a pacy 100 minutes.

Clara (Mackenzie Foy) and her siblings Louise (Ellie Bamber) and Fritz (Tom Sweet) have lost their mother; their father (Matthew Macfadyen, doing 21st century loving yet stoic Victorian dad to bearded perfection) is a stiff-upper-lip type who tries to keep up their mother’s traditions but is found lacking in the Christmas decorating department.

This is an overstuffed film, though to be fair, the Victorians – rich ones anyway – lived overstuffed lives, despite their dour image; their large homes suffocatingly filled with pictures, patterned wallpaper, ornaments, sofas, chairs, drapes and everything else they could cram in.

Clara’s mother Marie loved inventing, a skill encouraged by her guardian and Clara’s godfather Drosselmeyer (Morgan Freeman). Clara has inherited this talent, and when on Christmas Eve her father gives her a locked, engraved silver egg from her late mother, she’s determined to find a way to open it.

Her quest starts in a sparkling wintry forest (“why is she in Narnia?” whispered my 9 year old loudly), which leads her to the key, only for a little mouse to run off with it, pausing every now and again to turn around and do a “hahaha I’ve got your key!” face.

The landscape changes from snowy Christmas tree forest to menacing wood with huge leaf-less trees and a terrifying Mouse King made up off thousands of little rodents that move and pursue as one. It’s in the wood that she first finds Mother Ginger, who lives in a derelict fairground (which if you’re me, makes this the scariest segment of all).

Clara is assisted by Phillip (Jayden Fowora-Knight), a living Nutcracker soldier doll, who relates a side of Marie’s life that Clara knows nothing about; a story she hears more of when they reach the palace.

It’s here they meet the Regents of the Realms: Sugarplum, from the Realm of Sweets; Shiver (Richard E Grant) from the Realm Of of Snowflakes; and Hawthorne (Eugenio Derbez) from the Realm of Flowers. (Grant and Derbez barely appear though they look stunning: Grant dripping with icicles, Derbez a vision in green and gold, with mauve highlights that perfectly match Sugarplum’s dress.)

Missing from the line-up is the apparently warlike Madam Ginger of the Fourth Realm, played by Helen Mirren with a middle-aged exasperation at the daftness of the young which I greatly appreciated.

Keira Knightley’s Sugarplum is both incredibly irritating, with her squeaky Queenie-from-Blackadder voice, and deliciously watchable. As she dances around in a violet layered dress, comedy make-up and purple My Whippy hair, she looks like a pantomime dame crossed with Mrs Slocombe from 1970s sitcom Are You Being Served?

Time runs differently here, in this land so near yet so far from the Christmas Eve party that Clara left to look for the key. The touch of Clara’s mother is everywhere, including a giant machine that can bring toys to life (and turn them into giants) – and it still could, if only they could find that key. And despite the fantastical displays it’s a mechanical land, albeit one that bends the laws of physics in which Clara invests so much.

Overall this is an enjoyably marshmallow confection, though I do wonder why it wasn’t released in December – when the season of goodwill would mean frazzled parents giving 5/5 to anything that keeps the children occupied. Then again the film itself is like Boxing Day, with an “is that it?” feeling as we sit surrounded by jewel-coloured Quality Street wrappers and glittery gift bags that cost more than the present they contained.

There isn’t much sense of excitement, or tension, though the toy army at the end has a fearsome and blank-eyed doggedness. The performances are often one-note, though like a Christmas pantomime, it doesn’t really matter. (Mirren is great as usual but not in it that much.) There’s also not much ballet so try not to think of it as The Nutcracker With Keira Knightley.

Four Realms is an impressive display, even beyond the festive, fruity, sweet-filled, costumed richness within the palace. Outside are giant waterwheels, and vast cliffs with cascading waterfalls. The old fairground and giant mechanical woman where Madam Ginger hides are creepy and eerie. The short ballet performance is beautiful and stars ballet legend Misty Copeland as the Ballerina Princess. Richly textured outfits in every candy hue add a heavy-weight ornate opulence.

Marie’s apparent abandonment of the four realms to return to her family has left in its wake hidden depths of anger though, as the villainess of the piece uses Marie’s machine to create her own army of loyal, animated toy soldiers to take over the four realms. She expects their devotion: “I gave them life, they’ll only listen to me!” declares the wicked regent, and boy is she in for a shock if she ever has children.

By the end there are more broken toys lying around than in my house after a playdate.

The palace looks like Moscow’s St Basil’s cathedral, and I did wonder if the film was meant to be a comment on communism in theory and practise, with one side working together as one and the other creating a huge army to serve only them. (You may think that’s a mad idea but please bear in mind I’ve had to sit through a lot of films recently with Brexit allegories.)

So what is The Nutcracker & The Four Realms about then? Finding your strength within yourself, especially if you’re around 12. And also, at the end, about what happens when you fail to listen to older women.

Watch the trailer for The Nutcracker & The Four Realms: