You are here: Home / Film Reviews / The Mummy 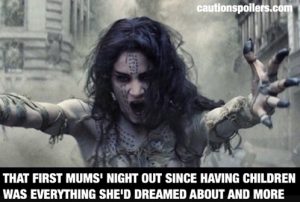 I enjoyed this film and not just because it’s proof that ancient mummies might have a chance with Tom Cruise.

It’s cliche-ridden nonsense of course, with cheesy dialogue and so many swarms of rats and spiders it frequently ends up looking like a challenge from “I’m a Celebrity… Get Me Out Of Here”, only this time with proper celebrities.

But while The Mummy is no masterpiece, it is a fun monster romp with some good action and a few scares along the way.

This time around Sofia Boutella is a 5000 year old bandaged beauty, by turns drop dead gorgeous and dessicated, her wrappings providing just enough modesty as they gently unravel during the course of the film.

I try to support women in movies and I have to admit I was rather gunning for her to win even as she made clear who she was going to kill everyone she hadn’t turned into part of her undead, dusty and frankly rather unsteady-on-their-bony-feet army.

Boutella plays Princess Ahmanet – a young woman brought up to succeed her father the Pharaoh, and trained not just in skills of leadership and fighting but also in suppressing emotions. So it is not surprising that, when her father’s second wife gives birth to a boy who will leapfrog her in the line of succession, she seeks her revenge.

Turning to the dark side, she kills her father, stepmother and half-brother, but is caught and as a punishment is bandaged alive and entombed. Her sarcophagus, with an effigy not of a calmly sleeping figure but rather a face resembling Edvard Munch’s The Scream, is taken far away from Egypt and left in a well filled with mercury, which can apparently ward off evil spirits.

Nick (Tom Cruise) is a thief (sorry, a “liberator of precious antiquities”) supposedly helping the US forces in modern day Iraq who stumbles on this tomb, miles from Egypt. When they investigate they find an echoey chamber and a system of ropes and pulleys which still work after thousands of years, mainly because my 7 year old (catchphrase: “what’ll happen if I touch this, Mum”) hasn’t been anywhere near them.

When we first meet Jenny (Annabelle Wallis) she is… what’s the opposite of reminiscing? Rueing the night of passion she spent with Nick who then stole a map from her before leaving while she slept. Facing him down in public days later, as they argue over what to do about his discovery, she then accuses him of lasting only a few seconds which rather adds a new angle to his previous claim that he and his partner in crime Chris like to “slip in, slip out, just like we always do”.

However once she realises the significance of his accidental discovery they are forced to work together, along with Chris (Jake Johnson), Nick’s reasonably funny friend and fellow army man.

Naturally they remove the Mummy’s sarcophagus, which brings forth sandstorms and spiders.  Then for some reason they decide to bring this coffin of evil to the UK, as if we didn’t already have enough problems. (Though perhaps it was the safest place. We Brits, known for our terrible mercury-filled teeth, may well offer the best chance of containing the Princess’s evil.)

The main action sequence is in the aeroplane bringing the sarcophagus back to the UK. As evil powers take hold the plane starts plummeting to the ground, in a sequence I found genuinely disjointing. Scenes in the ruined English abbey are also quite nerve-wracking as the Mummy creeps around in the dark, free at last.

There are cliches a-plenty of course. Weird eyeballs, things crawling into ears, strange hallucinations in sand dunes like that Fry’s Turkish Delight advert from the 1980s. But it’s a blockbuster about a mummy and I wasn’t expecting Shakespeare.

Any jokes are predictable and I wasn’t impressed by the cavalier attitude to death in the firefight scenes in Iraq – it’s almost cartoonish. The film is also hugely derivative. The reappearing chatty dead friend is straight out of American Werewolf In London, and just like in Reign Of Fire a railway tunnel extension wakes up something better left snoozing.

The Mummy is quite pacy though, and never outstays its welcome,  though the section in the middle with Dr Jekyll (Russell Crowe) does drag a bit. Jekyll talks a lot in this but for almost all of the time I had no clue what he was going on about. He is also remarkably cavalier about his giant syringe, which stops him turning into his wicked alter ego My Hyde. It’s not really clear what he is there for, beyond introducing him as we descend into Universal’s up-coming Dark Monsterverse, of which he and Hyde will be a part.

Boutella as the Mummy is fun and snarly and completely without mercy, though she isn’t on screen nearly enough considering the film is meant to be about her. Cruise has some batshit dialogue but tries to take it all seriously, even though his character isn’t really fleshed out. Though I like how Nick doesn’t claim to be a good person but rather keeps having nicer people thrust that title on him (how often in real life is someone we want to admire as heroic shown to be hugely fallible?). When Jenny thanks him for a particularly selfless deed, he tells her quite clearly that he was only accidentally good.

Annabelle Wallis is rather wasted here. An old-fashioned love interest, she does though have some of my favourite lines, where as the resident egyptologist she glances at the newly dug-up sarcophagus and manages to instantly translate every hieroglyph without recourse to Google. (One day I’d like to see someone peer at the squiggles on a mummy’s coffin and realise it translates as “Piss off and leave me alone you western fuckers”).

The Mummy is fun but it is also rather disappointing – mainly as it doesn’t really know if it wants to be a comedy with scares or a horror film with jokes, so sadly it doesn’t manage to excel at either.