You are here: Home / Film Reviews / The Mercy 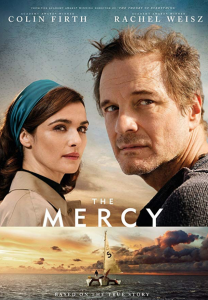 The Mercy is based on a true story. If you don’t know the outcome, and don’t want to before you see the film, bookmark and come back later!

Amateur sailor Donald Crowhurst’s emotional collapse, as he tries to non-stop circumnavigate the globe in his trimaran Teignmouth Electron, seems, in hindsight, inevitable.

It’s clear from his first preparations that he’s woefully ill-equipped for the task he’s set himself. And as his dream crumbles, the foundations of his understanding of what kind of man he is, are as brutally exposed as his unfinished boat on the stormy sea.

Crowhurst (Colin Firth) is at all times beholden to men more astute than him (in this sphere anyway – he does seem to have been a gifted inventor, if not a terribly good businessman when it came to marketing).

Rodney Hallworth, his publicist, is so good that even before Donald sets off, the unknown weekend sailor has big-name brands donating supplies for the voyage, and a BBC deal. Once his achievements start filtering through, the publicity man ensures Donald is hailed a hero to the press and the public.

Likewise Stanley Best (Ken Stott), who has paid for the boat with Crowhurst’s house as collateral, is a successful local businessman; his caravans pretty much selling themselves. He’s realised most people have smaller dreams that may not be original or newsworthy but are easy to fulfil, and benefit the whole family.

The real story of Donald Crowhurst is extraordinary. In 1968 Crowhurst, who had little seagoing experience, entered the Sunday Times Golden Globe Race, a non-stop global circumnavigation. Any winnings could be used to prop up his ailing business (there were first finisher and fastest competitor prizes of £5000 apiece), and it would also be a chance to showcase his own sailing inventions. Plus, of course, there was the lure of completing one of the last great world “firsts”.

Soon his shortcomings became clear, and he resorted to faking his position to give him a chance of finishing. When his boat was found, drifting and with no sign of its owner, his log books and writings showed a tortured soul destroyed by what he felt he was forced to do. It’s a story that has fascinated people for five decades.

This is a poignant and at times jaw-dropping movie. Firth is tremendous, and never shies away from highlighting his character’s under-preparedness and the position his family are in. It’s an unflinching portrayal that’s sympathetic but utterly realistic about Crowhurst’s failings, as every disaster becomes etched on Firth’s increasingly troubled and guilt-ridden face.

“A story packed with courage, self-discipline and an unswerving belief in his own capabilities” is how Hallworth (David Thewlis) writes up Crowhurst’s increasingly unbelievable achievements as they’re phoned through from the wrong sea at the wrong time.

He is certainly courageous, though how much is choice (social and financial humiliation really does appear to be a fate worse than death) is moot. And his personal self-discipline contrasts with his haphazard preparations. Likewise his belief in his own capabilities is laughable: his wife Clare (Rachel Weisz) states early on that she likes that he can change his mind where necessary; and it’s quite clear to him once he sets off solo that his skills are outweighed by the task. (The boat-building runs massively over schedule and Donald doesn’t leave until the very end of October – the final deadline in order to participate in the race.)

Crowhurst is a good example of when people believe their own myth as a plucky amateur, and also their part in a bigger myth. Hallworth, that professional weaver of fictionalised real-life stories, understands this very well, talking to Donald at their first meeting about Churchill in wartime, a leader whose oratory focus on his population’s bravery may have made them brave.

Myths can drive us on but they’re also frighteningly seductive, glossing over physical, emotional and monetary shortcomings to focus on the idea that self-belief is enough. All around him, from Sir Francis Chichester’s stirring speech at the launch of the race to Hallworth’s publicity waffle, emotion-rousing language swamps common sense. Not everything can be fixed with sheer will or good wishes. (Thewlis’s Hallworth is a man made strong by focusing on his talents, and happy to use whatever he can against Crowhurst to leverage him so he actually sets out to sea. It’s a driven and in some ways scary performance.)

It must be a challenge to photograph “at sea” movies in a way that isn’t just the tiny sailor in a vast empty ocean. Cinematographer Eric Gautier does an excellent job using the vastness and loneliness of nature to show how far away Crowhurst has drifted from his family, the reasons he took on the challenge, and his values.

At one point the yellow oilskin-clad Crowhurst clings on to the top of his wavering mast, shot from above. As his mind unravels and he starts to try to place his deceptions within some kind of grand plan, he drapes himself in bright green seaweed like a nautical wise man, while in the distance a biblical light shines down through dark clouds.

Scott Z Burns’ script is as entertainingly engrossing in Hallworth’s office and the Sunday Times newsroom where Crowhurst’s feats are disseminated, as it is grimly despairing on Crowhurst’s boat.

Actually it’s almost funny, in a devastatingly bleak way, when Donald starts faking his log book entries in order to finish but come last; a far more complex task than simply not lying. Other competitors are dropping out, but he knows he can’t win as it will arouse suspicion. Trying to stay hidden in a far off sea for as long as possible, at home his plans are blasted to smithereens as the country takes his fake story to their hearts.

Clare, staying in Teignmouth, looks after the children and keeps the home fires burning. Weisz is very good – Clare is one of those women who has little say in a decision but then simply makes the best of it, being as supportive as they can be – though there’s not much for the actress (or the character!) to do.

Marsh’s approach to filming what is both a well-known yet mysterious story works well. We move from Crowhurst’s physical and emotional struggles against his boat, the elements and his own mind, to flashbacks, or his and Clare’s family home where she vacuums and peels potatoes for Christmas lunch alone, or takes part in premature public celebrations.

When Donald starts talking to himself, mulling over his choices and explaining his decision, it never sounds forced or too explanatory. His mental health struggles and his attempts to put his cheating into some kind of cosmic map are always heartbreaking, even though his original plan was foolhardy, and driven nearly as much by hubris as by necessity and obligation.

available on vod, blu-ray and dvd from amazon uk

Watch the trailer for The Mercy: