You are here: Home / Film Reviews / The Leisure Seeker 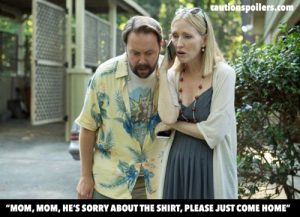 “You know what I love about you John? Your silence is never embarrassing” says Ella, still delighted at landing this catch all those years ago.

Which would’ve made me warm to her instantly, even if she wasn’t played by Helen Mirren, as I’m a huge fan of companionable silences. He too still can’t believe how he lucked out in marriage to someone so beautiful.

They’re a couple on their last road trip: “Freedom’s just another word for nothing left to lose” quotes John of Janis Joplin, as they drive south to Hemingway’s house in Florida, a place Ella had long promised him they would visit.

The Leisure Seeker is mostly a two-hander, starring two of our most valuable international treasures, and watching Mirren and Donald Sutherland’s characters navigate new and final obstacles together is often simply a joy.

It’s a story about the two of them, but it also highlights the invisibility that comes with age; many of the younger people they encounter seem uninterested or dismissive of the pair, apart from one waitress who turns out to be a Hemingway scholar herself, and an ex-student who I only consider to be young as she’s younger than me.

But mostly his memory lapses and health niggles (forgetting his children’s ages, nighttime incontinence) are smaller scale and witnessed only by her.

Ella and John aren’t the only ones who enjoy the familiar, as they drive off in their old Winnebago; with Ella reminiscing about previous holidays they’d taken with their children, gently and not-so-gently prodding John’s failing memory reserves.

For us too, another movie featuring exceptional, well-loved actors exploring well-worn themes can also be comforting. There is much we’ve seen before here. But the performances and the refusal to present old age either through rose-tinted glasses or as hell on earth lift it considerably.

John Spencer is a retired university teacher of English – he may not be able to remember why he’s woken up on a Pennsylvanian campsite but he can still discuss literature with passion and wit.

He is, as Ella tells a park attendant when she temporarily loses him, “distinguished”, with his shock of white hair and neat white beard, teamed with a shirt and always a tie. (What is it about retired university teachers and ties? My dad was one and always wore a tie even on his daily hill-climb.)

John has so far stayed living at home, with his wife increasingly his carer but also still his lover. (Their son’s distaste at walking in on them enjoying oral sex is a perfect example of the infantilising of elderly people.)

Ella too has been ill (when she takes off her Tootsie-like wig to reveal a funky white spiky ‘do underneath, you’ll be silently screaming “you look so much better without!” at the screen). This isn’t just one way care, as they sit in a diner reminding each other to take their respective collections of pills.

The Leisure Seeker opens at a cracking pace as their son Will (Christian McKay) arrives at their home to find his parents gone, along with their old campervan. But after that he and his sister Jane (Janel Moloney) sit at home waiting for erratic phone calls, as the movie meanders slowly southwards down the East Coast; befitting for a couple visiting old haunts and long-promised places.

They’ve set off from Wellesley in Massachusetts, that bastion of Democratic support. Trump is talking about making America great again. Later, many miles south, the befuddled John wanders into a Trump rally, shouting slogans and guilelessly enjoying the camaraderie. It looks like Ella’s biggest nightmare, her husband wearing a Trump and Pence badge on his lapel, and she desperately reminds him that he volunteered for Walter Mondale back in the day.

Ella is by turns lovingly helpful, lovingly unhelpful, and hugely frustrated at his forgetfulness. Every evening they sit in the dark outside their campervan looking at old slides of family life (are they real pictures of a young Donald Sutherland? They certainly look like him).

His memory of their life together ebbs and flows, from befuddlement to tack-sharp responses. But even when he can remember his kids’ names he forgets how old they are, expressing shock that they’ve been left alone at home. “They’re almost old!” responds Ella.

It’s really brought home how little they have been apart when they upgrade from a campsite to a swish hotel for a night. She doesn’t want to spend too much, but turns down a standard room for a hugely expensive suite because the cheaper room has twin beds not a double.

Ella and John are complex, flawed and real, and Mirren and Sutherland are superb; while Ella leads, John isn’t simply at a static state of dementia as he starts to show flashes of the anger that can come with it. He rages at her first love from over 50 years ago; she discovers a decades’ old betrayal.

Will, Jane and their parents’ neighbour Lillian are the only other characters with much visibility. There are vague allusions to family favouritism and sexuality, though actually the tiny threads left hanging make this story more realistic.

(I’m not entirely unsympathetic towards the siblings. My mum had dementia and when Will says in angry astonishment “I think she turned off the cellphone we bought her”, it reminded me of a bizarre weekend when both my parents were still alive. On a trip back to the city we grew up in, they managed to lose each other for a day – finally reunited next morning, it transpired they hadn’t used their mobile phones to call each other as they’d never made a note of each other’s numbers.)

The film does feel too slow at times, and some of the actors playing minor parts are weirdly self-conscious (the wedding reception fun at Hemingway’s house looks very forced). It’s also more warmly amusing than laugh-out-loud funny.

But the two leads manage to navigate the emotional waves without ever dipping into sentimentality.