You are here: Home / Film Reviews / The King’s Choice 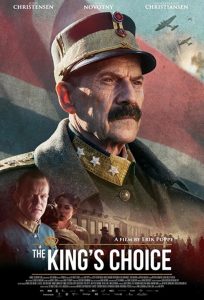 The actual German invasion is swift, though not entirely unexpected. A battleship sails into the Straits of Norway, the home forces attack, and a huge ship burns orange against an inky blue night sky.

It’s an impressive initial volley, and also a heartbreaking last stand, as more German warships follow it into Norwegian waters. A truly stand-out scene, it’s spare but moving, as the screams of dying German sailors are heard in the distance.

Set over three days in 1940, The King’s Choice examines the dilemma facing King Haakon of Norway, who must decide whether to negotiate with the invaders and limit the likely bloodshed, or rouse the nation to fight.

Director Erik Poppe has crafted a clever film that’s more that just a slice of history that needs to be remembered. It’s also a stunningly shot story, from fighter skirmishes to the echoey buildings to rushed snowy escapes.

Later as Nazi soldiers chase King Haakon VII (Jesper Christensen) and his son Crown Prince Olav (Anders Baasmo Christiansen) northwards, Norwegian soldiers face down their German attackers across a snow-covered field. Bullets whizz to and fro like miniature silver torpedoes, almost singing through the air, while a huge barn turns into a fireball and the confused, terrified cries of the animals mimic those of the German sailors earlier on.

The Germans claim in their propaganda radio broadcasts the invasion is to better assist Norway against the British and French who, the Nazis claim, have been laying mines in Norwegian waters.

Actually Germany wants access to two things: iron ore for its war effort, and Norway’s strategically important coastline. It’s a fast violation, and early the next morning the King’s advisors rush him away from the capital.

Haakon’s decision is not a straightforward one. His Cabinet is split, and the responsibility for Norwegian lives still to be lost hangs heavy on him. He’s an old-style leader, doing everything for Norway and expecting others to do the same.

Though at least here he has a choice: for he has “little choice” in later accepting his Cabinet’s resignation. And his brother, King Christian of Denmark, whose country is occupied by the Nazis at the same time, “did not have much of a choice” but to cede. Generally, kings and queens don’t have much choice beyond subtle influencing.

But while King Haakon’s role may be mostly ceremonial, like many figureheads he gains power from his popularity; and crucially for him, because he is, unusually, an elected monarch.

The black screen cards with their white italic lettering that appear regularly throughout the film list the day, time, location and distance from Oslo – they’re regular reminders that the Norwegian Royal family is, reluctantly, fleeing, but they also add structure to a story about multiple relationships and urgent decision making in the arena of war.

Meanwhile the atmosphere in the chilly official buildings is haunted by the silent chatter of recrimination; about missed chances to prepare for war, recriminations eventually voiced by Olav.

By now the King is growing old – he’s 68, and becoming as physically creaky as the wooden bed he tries to rest on at a farmhouse, his face etched with weariness. He looks like one of those Edwardian patriarchs, stumbling up against the modern era, but though his stoicism and asceticism are rather old-fashioned, his accompanying sense of duty toward his country means he acts in quite a progressive way; and his obvious love for his family, particularly his grandchildren, is touching.

Haakon’s straight-backed demeanour, combined with his internal struggles, help create what becomes the story’s powerful central dynamic: the contrast between the King and the German envoy Brauer (Karl Markovics), whose actions are characterised by jittery urgency and increasing desperation.

Brauer is fighting his own colleagues, and is determined to “help” (in his eyes) the Norwegians avoid bloodshed by negotiating. He genuinely seems to think this is the way forward, and has some real affection for the country.

What makes it more interesting is the inversion of traditional roles; it is Brauer who is the unelected Nazi apparatchik; King Haakon who has a mandate from his people.

The background to Haakon and Olav’s rather spiky relationship is expanded through the film. Both duty-bound in their own ways, Olav is still determined they be very different leaders: “I just don’t want to be the king you are” he says, rather brutally.

Ultimately the decision as to whether Norway should surrender or fight falls just to King Haakon, who comes across as a man both standing alone and also probably lonely.

The relationships between both the King and his son, and the King and the German envoy, add an extra layer of confusion, smoke and muddle to Haakon’s decision-making. The sense of a man with the weight of his country hanging heavy on his shoulders is exceptionally well done, thanks to Christensen’s performance as Haakon. Markovics too is excellent as an enemy driven by a mixture of panic, determination and a misplaced sense of righteousness.

I’ve watched and read enough British history by now to always be prepared to unlearn well-known events which turn out to be the result of generations of myth-making. This is an exceptionally sympathetic portrait of the King, but I know so little of Norwegian history I don’t know how close to the truth director Erik Poppe’s storytelling is; or if this is a period that has ever been (or even needs to be) re-evaluated.

Having said that, The King’s Choice stands as a gripping and moving account of an individual’s internal and external struggles. And – after a year watching several WW2 movies set in or about the UK – it’s refreshing to watch one about a king who isn’t George VI.