You are here: Home / Film Reviews / The King 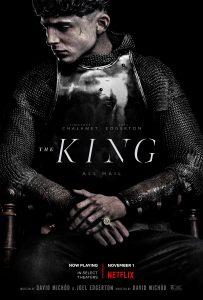 Henry V’s Chief Justice, William Gascoigne (Sean Harris), puts the realities of kingship best to the young English monarch: “Promise must be fulfilled. Promise must never be an end in itself.”

He’s not showing much promise when we first see Prince Hal; his father Henry IV is still on the throne, and Hal is a callow youth bed-hopping his way around the seamier parts of London.

The much older Falstaff is a fixer, spending his time sending women home after they’ve spent the night in the prince’s bed. It’s a role half-fraternal and half-paternal; the kind of position that becomes increasingly tricky to navigate, once one’s charge acquires not so much the paranoia of monarchy as an understanding of how many would betray them (when you’re king, people really are out to get you).

By the end of the film, Henry V’s new wife, the French princess Catherine de Valois (a late-appearing and thoroughly excellent Lily-Rose Depp), is damning in her verdict of her new and newly battle-bloodied husband, and what his great military victory at Agincourt actually means: “So easily riled, so easily beguiled”, she says, implying he’s less a victorious monarch than an easily manipulated victim of other, greater strategists. Yet it’s a conversation that ends with accommodation and respect.

Unfortunately you won’t be served up the famous speeches Shakespeare gave Henry at Harfleur or Agincourt either. The words Timothée Chalamet’s young King Henry comes up with just before that great battle are still inspiring, telling his men to fill the gaps between them with England, but they’re not St Crispin’s Day.

Previously, at his coronation, Hal knelt in just his cream linen shorts, a wiry boy waiting to be anointed by the archbishop, around him endless nobles and notables in their robes and ermine. At the celebratory feast afterwards he gives away a series of coronation gifts, until he gets to the small ball sent to him as an insult by the French Dauphin.

Henry starts off his reign with the arrogant purity of a young man who has not been watching how to rule. His challenge is not to be a purely reactive king, existing only to counter his father. He flip-flops at first, from humanity that could be weakness, to decisiveness in the face of betrayal, resulting in an unexpectedly up-close court beheading.

And the goading continues, pulling Henry into war.

Henry’s trudge through France starts with his trebuchet blasting burning rocks into Harfleur castle, before moving onto the setting for one of the most famous battles in English history. Agincourt is an extraordinary spectacle and one of the most impressive movie battles I’ve seen, as men punch and swing axes at each other in thick mud, filmed up close and personal. The small numbers are shocking, the hand to hand combat frenzied, desperate and brutal.

The English are massively outnumbered; in a terrific scene Hal has taken counsel from Falstaff (a solid and weighty Joel Edgerton) in his tactical approach. The rain they expected was coming, said Falstaff, from England; as the French are lured into a trap, the thick mud turns their armour and chainmail from polished pewter and shiny silver to dull dark grey. (The whole film is grey, though apart from this battle, medieval life does seem remarkably clean.)

The famous English archers, hiding in the forest, let loose volley after volley of arrows, though the first wave of English troops on the battlefield – including Falstaff – know they’re lambs to the slaughter.

Henry too is down in the thick of it; later he watches as the Dauphin (Robert Pattinson), in his sparkling armour, arrives on his horse and disdainfully agrees to fight one-to-one for France.

Though Henry is supported by other weighty characters, it is the constant skirmishing between the English monarch and the French Dauphin that is most memorable (though as an actor Pattinson dominates their scenes). Pattinson looks like an American early 90s grunge rockstar, Chalamet a skinny British guitar boy from five years later; though at times the Dauphin seems like a cat lazily toying with a brave mouse.

Pattinson adds quirky humour to a film that’s otherwise rather po-faced. His accent is extraordinary, but it becomes clear why, when he and Henry talk before the battle. The Dauphin wants to talk in English he says, before belittling it as an easy and ugly language. Suddenly his exaggerated accent is shown for what it is – mockery of his opponent. Henry V is the first to make English the language of government; his father was the first English king to have English as his mother tongue since before the Norman Conquest. Yet he’s being shown that only a Frenchman can make his own language interesting.

So what of Chalamet’s promise? Surrounded by heavyweights, his is a mostly anchored performance, though occasionally it’s an effort for him to stay grounded as other actors fill the screen. Ben Mendelsohn is a charismatically straightforward Henry IV: matter of fact about the necessities of kingship, used to moving briskly to secure his throne, and wearily disappointed in the son who carouses and insults him. Sean Harris is quiet, steady and stealthy as the Chief Justice – a power behind the throne, unbeknown to its incumbent.

Kingship and fatherhood are always closely related, and Henry IV of England, and the Dauphin’s father Charles VI of France, bookend the film. Their relationships with their children couldn’t be more different – Catherine de Valois speaks touchingly of the madness that often consumes her father, in contrast to Henry IV’s relationship with Hal.

Nicholas Brittel’s beautiful soundtrack is moving and inspiring. There’s a resonant clarity to its very different songs, and I’ve continued listening to it on muddy forest dog walks long after the details of the story I watched have blurred into my memory’s existing tangle of Shakespearean adaptations, historical epics, Series 1 Blackadder episodes and parodies.

And, Agincourt excepted, this is a rather conventional epic; though despite its 2.5 hour runtime it doesn’t feel particularly long. The start, as Henry IV deals with traitorous courtiers like he’s brushing crumbs off an apron, is fabulous. It loses momentum in the middle, but ends on a high.

Catherine’s honestly means that by the end, despite all Henry has learnt about kingship – about truth and lies, the manipulations of other monarchs and his own courtiers – he has someone to trust. The crowd outside may be shouting for their king, without understanding how he and they got there. But even though Falstaff is gone, Henry is not alone.

The King is currently available on Netflix.

Watch the trailer for The King: