You are here: Home / Film Reviews / The Kid Who Would Be King

This is a story of derring do and derring don’ts, as 12 year old Alex Elliott’s failure to adhere to the four points of the Chivalric Code almost cause our country’s downfall. 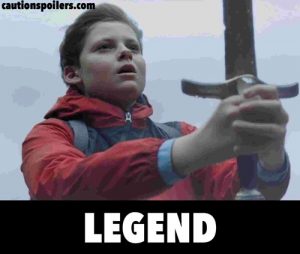 We’re in enough trouble already, and about to be enslaved during an eclipse by King Arthur”s evil half-sister Morgana (a delightfully nasty Rebecca Ferguson). “When hearts are hollow and the land is lost and leaderless again, I will return!” she declared back in the Dark Ages, and yes all those boxes are well and truly ticked now.

Morgana, banished underground by Arthur, turns out to have been spending the millennia since entombed in a cavern bubbling with lava, several thousand feet below Alex’s suburban house.

I don’t know when writer-director Joe Cornish started writing The Kid Who Would Be King but there’s a definite Brexit flavour to all this, adults who should know better failing the nation amid childish playground factions. It was also interesting watching it the day after the UK children’s strike, when thousands skipped school to march against climate change.

A film trying to stop children and teens from feeling powerless, or acting badly simply to grab some agency for themselves, feels particularly relevant.

Arthur though, as we discover from Alex’s book about the legendary king, not only brought together enemies and made them friends but stressed their equality with a round table, which is more than Theresa May has managed.

Luckily your average fold-down dining table, still found in most UK homes, does just as well – the pot of tea, orange squash and plate of biscuits adding an extra British touch to this legend which we already often feel defines us as a nation.

Alex (Louis Ashbourne Serkis) lives with his mum (Denise Gough); his dad isn’t around, though Alex’s last memory of him is on a visit to Tintagel, the supposed birthplace of Arthur, when he was 5. It was then that his father gave him the book of Arthurian legends, inscribed to Alex as “my one and future king”.

When the now 12 year old schoolboy pulls Excalibur from its stone (on a building site, fleeing school bullies Lance and Kaye) he starts to believe that he could be a descendent of Arthur through his father, who will help him on his quest – if only Alex can track him down.

This other quest is – as the endearingly oddball young Merlin (Angus Imrie), newly enrolled at their school, tells him – to find the entrance to Morgana’s lair and kill her and her demon warriors before the eclipse in four days’ time. (Merlin is partly involved and partly an enigmatic bystander, letting Alex complete his own journey. Which seems rather a risk, considering what’s at stake.)

“Greed, entitlement, vengefulness” is how the wizard describes Morgana, so you can see why she feels so at home here. Her army of fiery skeletons, wearing horned helmets and riding long-dead horses who leak larva, are genuinely scary. They’re a mesmerising and terrifying sight as more and more emerge from beneath the earth to do their mistress’s bidding.

Morgana’s final form, a flying creature with a huge amphibian tail, is also very freaky. This is not an adversary who can be persuaded to let the kids off because they’re only young. (It’s worth mentioning that my 7 year old, usually the one making me feel better about frightening scenes in children’s films, initially watched the fiery demons through his fingers.)

Louis Ashbourne Serkis is a gem as the brave Alex, whose earnestness often turns out to be a rather delicious deadpan wit, protecting him as he attempts to make sense of the world with best friend, the stalwart Bedders (Dean Chaumoo) – before he’s interrupted by an urgent need for him to save it.

Patrick Stewart as the older Merlin makes us feel we’re in safe hands. (The exasperated Old Merlin makes a comment to this effect himself, on the exhaustion of having to revert to his older self to get people to take him seriously.)

The Kid Who Would Be King is an entertaining and magical family movie that successfully finds the threads that link an old legend with our modern, multicultural nation (it turns out being the chosen one is nothing to do with birthright after all; now if only that bit wasn’t a fantasy in modern Britain).

The story does sag in the middle, as Alex, Bedders, Lance (Tom Taylor) and Kaye (Rhianna Doris) head to Cornwall with Mini Merlin, as Lance calls him, pausing to learn how to sword fight along the way. We could have done with less traipsing over the moors, though I guess we should be grateful that all the prehistoric stone circles in the UK turn out to be travel portals whizzing our young knights from one county to another, or we’d still be up there.

But the scene-setting at the start of the film is well done, as two bullied tweens, their bouncy, open and enquiring minds already being weighed down with worries and fears, come to realise that the legend is (mostly!) true, and start to fight back.

The ending is fantastic fun and genuinely exciting, as the whole school is involved in repelling the demon warriors, their methods an ingenious mix of old school and modern tricks – cars with school benches tied to the front (“I’ve never driven backwards before!” wails one well-underage driver before doing it anyway), and hall tripwires bring down the first wave of attackers.

Though almost from the start, Alex has been reaching inside himself for his existing resourcefulness: destroying a warrior on a fiery horse with a well-timed car door opening, tricking the literally brainless demons into throwing themselves off a cliff.

There’s a lot of explaining of moral lessons, though I’m happy to take those lessons when it’s Patrick Stewart imparting them to us. (And it is, after all, a children’s film. Clarity of themes and morals are always welcome.) Morgana, too, whispers evilly in a voiceover about what she has in store for Alex and for us.

The film doesn’t sugar-coat the difficult real-life lessons. Lance and Kaye’s journey from school nasties to fellow knights of the Round Table is not an easy one; it turns out uniting with your enemies for more than five minutes at a time is trickier than it looks.

And it deals with the issue of Alex’s father really well. Alex’s discovery that what he thought was a myth (King Arthur) is true is a huge surprise to him, but ultimately, on balance, a welcome one. Finding out that what he thought to be true about his absent father is a myth is far harder for him to deal with.

Watch the trailer for The Kid Who Would Be King now: