You are here: Home / Film Reviews / The Isle 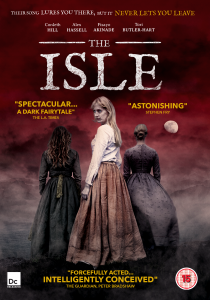 *** Read my interview with Matthew (director/co-writer) and Tori (producer, co-writer and star) Butler-Hart ***

I feel something of an affinity with sirens, as I too find that innocent men dash themselves on the nearest available jagged outcrop, their faces contorted in terror, whenever I start singing.

The Isle, a supernatural Victorian thriller set on a remote Scottish island, features sirens, mythical creatures whose songs cause sailors to turn their ships towards rocks and their doom – though in their case it’s because their voices combine entrancing beauty and a dangerous lure.

But writer-director Matthew Butler-Hart also weaves into this a story of ghosts, possession and revenge.

Three sailors, Midshipman Oliver Gosling (Alex Hassell), Ableseaman Cailean Ferris (Fisayo Akinade) and Ableseaman Jim Bickley (Graham Butler), are the sole survivors of a shipwreck on the rocks, who find their way to shore through the mist.

This is an island that shouldn’t even be there – it’s not on any charts – though it feels solid enough.

They’re met by Fingal MacLeod (Dickon Tyrrell), an unnerving presence who still shows glimpses of the open, friendly man he once was.

Fingal is one of only four inhabitants: his daughter Korrigan (Alix Wilton Regan), Douglas Innis (Conleth Hill), and his adult niece Lanthe (Tori Butler-Hart, who also co-wrote The Isle).

The absence of other islanders, and the reasons for the four choosing to remain, are just two of the mysteries and tragedies that entwine in this effectively eerie film.

Initially questions are met with evasion (a boat to the mainland never materialises), and though the three sailors are reluctantly taken in by Douglas, once the men are inside his large cottage they’re continually warned against going back out to investigate the island.

There are hints though that something lurks. “This is a dead isle. We’re only here because we have no choice” Douglas reveals ominously, before clamming up again, when the men want to explore. Korrigan, her mind in tatters, stalks the woods, cliffs and beaches night and day. Lanthe is torn: friendly but holding something back.

Outside mist and fog rise in seconds, the thunder crashes, wind howls – and carried on the wind, fluttering through the trees, are whispered words and fragments of songs.

This is an utterly gorgeous film. Particularly effective is the contrast between the rich colours outside in nature and the muted, almost neutral shades used indoors, from the whitewashed walls to the spotless dark furniture and the men’s simple but hardwearing clothes: grey, navy, brown, and cream. The houses aren’t dark – the sun bursts through – but they feel neither frightening nor warm and welcoming.

Despite the chill, and the wind- and sea-swept location, nature is a stunning painter. There’s an overhead shot of the forest on the island with the trees standing green, brown, grey and orange. In a flashback to a funeral, the mourners in their navy cloaks carry succulent dark green ferns and vivid scarlet berries.

The Isle isn’t a horror film as such though it is sometimes frightening, and there are some jump scares. The sense of menace grows, eventually turning to panic, and still the seamen don’t know what’s behind it, though their worries are soon proved right.

Particularly poignant are the flashbacks to a time before it all went wrong, when Lanthe and Korrigan were simply cheerful young women having fun at the village dance, and Douglas and Fingal were weighed down only by the usual worries of farming and island life. By the time the three sailors arrive the two older men are taciturn, self-contained, bristling with untold stories; the women damaged and threatening danger.

Sometimes the film’s low budget shows, especially in the effects, though they’ve also made the most of what they have – the island itself with its sense of isolation that can warp into hostility, and a story that only needs a tiny cast.

The different scares can feel a little muddled and the mysterious woman we glimpse doesn’t work when we spot her in the woods. She looks solidly modern, though momentary appearances in the corner of a mirror are more effective, as is what could be described as her deathly decline.

The cast is impressive and characterisation is deft, the sailors blending working men’s pragmatism with an acceptance of superstition and seafaring traditions. Oliver, Cailean and Jim feel like a team, albeit one that continues to operate within the class and job lines of their ship. In fact it gives them a sense of normality and structure as everything else turns out to be not what it seems. Cailean is thoughtful and not really cut out for a seafarer’s life. Jim is instinctive and forthright. Oliver, the posh one, is clever and self-contained. The Islanders are believably taciturn but never stereotypical.

What works so well in The Isle is its merging of old and new, ancient and modern: sirens originating from Greek mythology, sailors’ traditions, a Victorian ghost story written by 21st century writers. Its aesthetic sensibility often feels, in its clean lines and muted colour scheme, stylistically modern. There’s an elegance to the film’s tones and contrasts.

The story itself is comfortingly, traditionally creepy, with an effective pay-off. It did remind me of one of those Victorian novels I loved so much in my teens, dripping with mystery and melancholy, a sense that no one could escape even if they wanted to (though it doesn’t mimic those books’ doorstop quality – The Isle comes in at a nifty 96 minutes).

Like many a vintage ghost story, there’s also a sense of unfairness about the fate of most of its victims, the randomness of revenge, which is a more human response than we probably care to admit.

Watch this on a dark evening with a glass of whiskey in your hand, checking half-way through that the doors are locked and praying there won’t be a power cut, or a strange noise outside.

rent / buy on digital or buy the DVD – Amazon UK

Watch the trailer for The Isle: