You are here: Home / Film Reviews / The Islands And The Whales 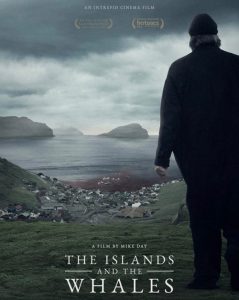 Before watching Mike Day’s film, all I knew about the Faroe Islands was that they were sort-of Danish and had an occasionally giant-killing national football team.

Actually I wouldn’t be surprised if they really had killed giants, as the islands have a tradition of huldufólk, elves who couldn’t be seen by everyone (or by anyone at all now: “You would hear a lot of huldufólk in the past but that was many years ago. They’re long gone now, after the electricity and all the lights arrived” says one elderly islander, invoking the past while proving change is always a constant).

Huldufólk are friendly if you treat them right and respect them, a projection and a description of isolated communities the world over.

There are 48,000 people living on these rocky islands (now linked by road tunnels), which loom up out of the sea like huge ocean-going tankers.

Little grows there so much has to be imported, but they still hunt locally for food: sea birds, and – most controversially – pilot whales. Islanders eat both whale meat and blubber from these animals which are both intelligent and highly social.

When whales are spotted, little boats push them towards shore, where hunters wait. Locals run down in droves, having been called on an unofficial contact cascade.

The seawater runs not red but pink, flowing around and over small rocks, the surf tips still white. It’s a vivid visual description but what it doesn’t show is mercury, levels of which have rocketed in humans since it got into the food chain; starting at the bottom of the ocean, it’s far more concentrated by the time it reaches whales and seabirds.

This Viking-descended community prides itself on its foundations in hard work by hardy people, and also myth and legend. “They encountered mermaids, sea monsters and mermen” says one, of their ancestors.

It’s easy for a country to base its arguments for maintaining outdated traditions on a mythologised past. But it’s also easy for outsiders to romanticise that past against its present. Modern fishermen standing around in modern wet-weather gear smoking cigarettes, or killing cute puffins, doesn’t elicit much sympathy, even from devotees of the roast chicken dinner.

Mike Day’s thoughtful and deceptively hands-off documentary focuses on hunter and fisherman Bárður and his young family; head of public health Pál Weihe; and (in a rather arms-length way) activists from the Sea Shepherd marine conservation organisation.

Families the world over are more similar than different: “you can’t only eat ketchup, you must have meat too”, says Bárður’s wife to one of their toddlers, though the meat she offers is whale blubber.

Barour eats more whalemeat than the rest of his family, and doesn’t see why any of them should stop; his wife gently suggests eating less. (Bárður is rather out of touch with modern sensibilities and at one point puts an inflated rubber glove over his head in front of his children.)

Quietly spoken but utterly committed, Weihe has been studying mercury levels for decades. Its effects are many and include slowed brain development in children; he’s driven to reducing how much whale meat and blubber locals eat, despite the difficulties in persuading people to change.

The mercury partly comes from coal burning, though other contaminants are also devastating. “Their little stomachs are full of plastic” says an old man cleaning the bodies of birds. Species are dying out, from fishing and hunting but also from pollution.

Tradition isn’t just local people performing ring dances in costume, though we see that too. “It’s a big deal to trust the rope” says one seabird hunter, putting his faith in the men holding on above to keep him safe, as hunters have had to do to centuries.

Pilot whales aren’t endangered but the world doesn’t look kindly on whale hunting, and there’s a press conference on the harbour with activists from overseas. Fishermen watch from the hill as boats and catamarans are driven off: “they name their boats after people who give them money.” “That’s a pretty cool boat.“ “It’s called Thor”, raising the spectre of nature in the form of the Norse storm god saving the whales.

Pamela Anderson is there too, telling locals they should go vegetarian, which I’m guessing won’t work. The French activist next to her wants a more sustainable planet: “we have to change if we want to survive”, but for islands growing and hunting their own food is a sensible precaution – wars have taught us that.

As a glamorous B-list actress, Anderson is easy to mock; but she’s got as much right to activism as anyone else and at least she’s a vegetarian, and living her solutions.

Locals see the activists’ actions as a misfire, claiming that young people uninterested in hunting have taken umbrage at interference in their way of life by outsiders. Though it’s not always clear how much Faroe Islanders are trying to convince us and how much convince themselves.

The whale hunting scenes are brutal and hard to watch, as are the seabird hunts. But this is also a starkly beautiful film. Hunters’ head torches illuminate dark blue water and green cliffs on ink-black nights. White misty spray cascades upwards as the wind whips over a terrifyingly high waterfall. And the knitwear! If you like tough young men in patterned jumpers you’re in luck.

Day’s film raises many questions, though the filmmaking style doesn’t lend itself to answers. If you eat meat, is it acceptable to deny other communities the right to kill species you don’t eat? Is it okay to kill and eat unintelligent animals? Can tradition in itself ever be enough justification to continue? Why should the Faroese change their ways rather than the industrialised (and industrialising) polluter nations? And what actually makes people change?

Smaller communities often feel outsiders don’t bother to understand that a long-standing way of life is not simply a list of activities but an intricate jigsaw linking tradition, jobs, income, and identity. Outside demands too often bond a community together in antagonistic response, for good or ill.

Day doesn’t offer his own answers; instead his approach illuminates both the wider community and his subjects’ sometimes work-in-progress views. He’s crafted a moving and non-judgemental look at a community used to evolving at its own pace, but whose own traditions are now a threat.