You are here: Home / Film Reviews / The Interview (Short Film) 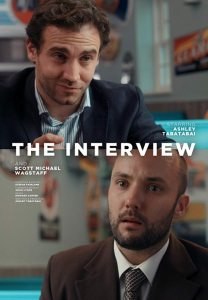 It’s bad enough being asked to show your work at interviews (for which read “write something for free that we can use whether you get the job or not”). But poor Robert Stevens (Scott Michael Wagstaff), the interviewee in Stefan Fairlamb’s short film, finds this taken to a whole new level.

He’s come to a diner to meet Joseph Green (Ashley Tabatabai), a smooth-talking CEO of a viral video company. Green says he’s looking for a new employee, someone who can eventually, with Green’s guidance, end up managing parts of the business and bringing in the big bucks. Win-win, as we said about 30 years ago.

This is a focused and funny film, and at under eight minutes there’s a lot packed in – as Robert’s hopes and dreams are manipulated by Green without him realising.

Characterisation is deft, if at times veering slightly towards caricature (a common issue when you have to do so much filmically in so little time).

Green certainly talks the talk – his company is striving to be staff-centred he says, after asking Robert if he knows that “most corporations are inherently psychopathic” – but talk is cheap, just like the package he wants to offer Robert.

Robert is old school, and doesn’t understand modern, online business enough to know whether this is a genuine opportunity. As Green dangles the carrot of massive future earnings Robert is too, well, green to judge whether it’s even a proper job.

The smooth and enigmatic Green is calm and in control at all times, not only steadily reeling in his catch but also enjoying every moment of it, flattering Robert that he has spotted his tenacity when it’s clearly unfocussed desperation and grasping at straws.

It’s an engrossing performance from Tabatabai, at times mesmerising as we watch him carry out his plan. You know something’s coming, you’re just not quite sure what.

Wagstaff’s Robert is initially over the top. His childlike desperation and naivete are believable, especially for someone who is completely outside his comfort zone (his media experience is, he says, that “I watch a lot of YouTube”). But his exaggerated nervousness and insecurities are initially too extreme (though he does settle into his character more as the film proceeds).

It’s clear that Green has an ulterior motive but there’s also a final, final twist in the tale that took me by surprise.

Cinematographer Adam Lyons has done a good job – the diner is open, bright and breezy, while the two men are in their own little world sitting across a formica table. Old-old world if ever there was one.

This is a rather brutal but also funny take on commerce, and what happens when old and new bump in to each other. Robert is old business, needing to move into the new arena, finally understanding that it’s changed but still wanting to retain the old familiar structures and safety nets.

And there’s a morbid fascination watching this little drama unfold, even though we know that all Robert is really guilty of is not keeping up with the times (and I certainly know that feeling!)

Watch the trailer for The Interview now:

The Interview | Teaser Trailer from Ashley Tabatabai on Vimeo.