You are here: Home / Film Reviews / Intern, The 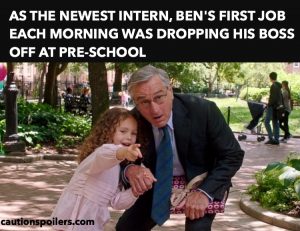 You can see why companies want retired interns – with their final salary pensions they’re the only people who can afford to work unpaid in New York.

The Intern reminded me of those couples who have been married for decades even though one is a Guardian reader and the other devours the Daily Mail, in its constant attempts to be both supportive of working mums and blame them.

Ben (Robert De Niro) is a 70 year old retired former company man. Now widowed, he’s bored with his life, and applies for an internship aimed at senior citizens at internet clothing company About the Fit.

At the end of the interview process the last interviewer (who looks about 12 but is probably mid-20s) asks him to think carefully before answering the next question “where do you see yourself in 10 years?” “When I’m 80?” deadpans Ben.

His new boss is Jules (Anne Hathaway), About The Fit‘s boss and founder – a super-busy working mother who’s at a crossroads with the business in terms of work/family life balance. Her investors want her to take on a new CEO, but she’s conflicted over whether this is best for her, for her family and for the company, which she’s grown from day 1.

Office life has changed since Ben was last there, and he has to navigate a new business culture and a young workforce. Still, he’s hugely experienced, and likeable; soon he’s won over most of his colleagues, though Jules isn’t so easily convinced.

Most relationships start at work, either with colleagues or from swiping Tinder when you’r bored at your desk. And Ben too is soon romancing Fiona (a delightful Rene Russo). Their first outing together is when he takes her to a friend’s funeral, and to be fair I’ve had worse first dates. (Fiona is the in-house masseuse, a role that appears to have survived various dotcom crashes along with free fruit and brightly coloured chairs.)

Jules has plenty of pressures outside work too. In fact like many mums she probably goes to the office for a break. At school drop-off she has to face down the stay-at-home moms who are apparently still, in 2015, guilt-tripping working moms into making their own guacamole to bring to the school hoedown.

And her stay-at-home husband is even worse: a supremely irritating bearded hipster who’s given up his career and massively resents it. He ends up having an affair, which Jules decides not to deal with as she’s just too busy.

The Intern has some enjoyable set pieces alongside the issues of the day. when Jules accidentally sends a bitchy email about her mom, to her mom, Ben gets the office guys to accompany him to mom’s house to find and delete the email, and it’s all very Ocean’s 11 with each man taking on a persona from that film – kudos to whoever came up with “Ben Affleck’s brother”. (Personally I wouldn’t have bothered. My motto is ‘never apologise, never explain’ and it’s worked well for me so far. I’ve got no friends though.)

Robert De Niro and Anne Hathaway are very good in their respective roles, with terrific chemistry, as Ben gradually helps Jules with the choices she has to make. And the company hipsters are fun if rather one-dimensional (then again dotcom hipsters are pretty one dimensional. I should know, I used to be one.)

Eventually even Jules’s errant husband turns over a new leaf, popping into the office in a gap between selflessly managing playdates and playing Ariel from The Little Mermaid with their daughter (does he even do any housework?).

The differences between the retired Ben and the youngsters are a little over-egged (he worked for 40 years making phone books, which are now completely obsolete; she discovers when working late with him one night that his old company was housed in the same office building).

Like the enthusiastic but boring colleague in the office who everyone avoids unless they bring in cakes, The Intern is likeable enough if a bit dull, with lots of tedious discussions about business and family. (It did leave my friend and I pining for those films with little or no dialogue that you can mindlessly chatter through, and when I say chatter, I mean Brits pondering “How much would that house cost in real life?” and then crying.)

Unlike an actual intern’s job, The Intern is undemanding. The two leads (and Russo) add a sheen of class to proceedings, and it’s often funny. It’s all just rather forgettable.

In fact the most memorable thing about it is its bizarre attitude to working women. The film is written and directed by a woman (Nancy Meyers) but seems to veer from supporting Jules in her endeavours, to undermining her and blaming her for problems in her life. After all, what should you expect to happen if your husband feels emasculated playing Ariel and you’re really busy earning the family income that enables your husband to stay at home playing Ariel.

And as a survivor of the first internet bubble back in 2000 I’m still rather disbelieving about start-up companies which are actually making money online.

but / rent the intern on vod or buy the dvd or blu-ray on amazon.com

Watch the trailer for The Intern: