You are here: Home / Film Reviews / The Heiresses 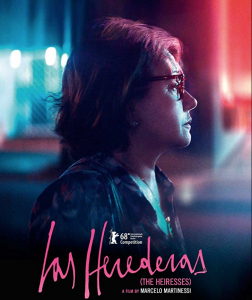 *** Read my interview with The Heiresses director Marcelo Martinessi ***

Chela (Ana Brun) and Chiquita (Margarita Irun) are a Paraguayan lesbian couple who have been together three decades. Both from wealthy families, they live in an inherited apartment, but their debts are piling up – and sales of their expensive glassware and antiques are only sticking plasters for their financial woes.

They’ve obviously been a tight-knit unit, in their dark apartment, furnished with heavy wood; where family memories and responsibilities to ancestors are just as heavy. But they also bicker over the tiny irritations that loom large after so long together.

But theirs is a stale relationship, as they replay the roles they’ve held each other to for years. The fact that they are lesbians is not explicitly examined in terms of the wider attitudes to homosexuality in Paraquay, though their home is certainly a haven; and as circumstances force Chela to venture into the wider world and stand on her own two feet, it looks like a nod to the country’s own tentative footsteps in the years since 1989 when democracy replaced dictatorship.

In the shadowy rooms it took me a long time to work out who was who, as if they were by now one person in their private space. The steady stream of wealthy outsiders coming in to pick over the women’s antiques creates an impossibly difficult situation, as their family histories and life together are put up for sale, guilt permeating every haggle.

Chiquita, the decision-maker, seems to be protecting Chela, who lies around in their bed feeling glum, occasionally rising to paint, refreshments brought to her by their maid.

But Chiquita is headed for prison, accused of fraud; and despite preparing both Chela and their maid Pati (Nilda Gonzalez) as much as possible she worries about her partner’s wellbeing.

Once Chiquita is gone, Chela certainly doesn’t lose all the trappings of privilege; she’s happy to insist on her coffee being on a certain side of the tray so it’s easier to drink, for example. These tiny details make her feel less humiliated and why not carry them on? They don’t cost anything; Pati at least is still paid. Less acceptable is Chela ordering Pati to come and sleep downstairs with her one night because she’s scared.

Chela is a nervous driver, and though Chiquita has on occasional encouraged her, in the main Chela’s lack of driving has certainly kept her close. Now though she starts to venture out in her expensive car, giving lifts to wealthy elderly neighbour Pituca (María Martins). (It’s interesting that Chela’s car is her means of spreading her wings; it was a gift from her father and so further highlights the breaking away from Chiquita.)

Soon Chela finds herself providing a taxi service, ferrying women from card games to their homes; her number passed from elderly woman to elderly friend, from niece to aunty, all keen to ensure the safe delivery of their relatives and friends.

One of these women is Angy (Ana Ivanova), a free-spirited 40-something woman with a complicated love life, whose elderly mother is having treatment in a nearly town a motorway drive away.

Despite her terror of motorway driving Chela eventually agrees to take her and Angy to the appointments; and along the way she and Angy develop a deeper friendship with the potential to turn into something more.

Angy is separate from the older ladies Chela drives around; she confides directly in Chela rather than chatting around her, as the other women do. But while Angy’s attempted seduction of Chela is central, it couldn’t have got to that stage without Chela’s gradual blossoming as she ventures from her dark, claustrophobic apartment out into world.

In prison Chuiqita is finding her place too. “you see the elegant woman over there? in dark glasses? …she murdered her husband. It was in all the papers”. But she’s powerless to do anything about the changes in Chela, despite her attempts to reassert herself in the relationship.

In many ways The Heiresses is a typical relationship drama, as one person grows away from a more dominant partner – often at their chiding – and engages more with the outside world; finding both their lost confidence and their worth.

It’s a story played out in countless relationships, and my main thought as the film ended was curiosity over what might happen to the three women going forward. Chiquita is vainly trying to hold Chela back (her last action is desperately cruel) while Angy offers a freer, more sensual and less stultifying kind of love.

But at the same time it’s been a more complex awakening for Chela, who is coping with a life-shattering change in status, which while it provides the impetus for a new life is also taking away everything she has relied on for so long.

Martinessi has elicited astonishing performances from both his leads, despite neither of them having much previous acting experience. Their close relationship before prison is brilliantly pitched; they bicker gently, as Chiquita tries to encourage her partner to do more; their old, privileged lives having up until now allowed Chela the luxury of collapsing into enervated despair whenever she felt like it.

And Chiquita’s preparations before leaving for jail are exquisitely touching, instructing the maid in the exact way Chela’s drinks tray should be set, and her pills be dolled out.

This is a beautifully played-out drama, where graceful details add a depth and humanity, often from side characters: Pituca daintily adjusting her ornate necklace after a sudden car stop by Chela, who still rather lacks driving finesse; or the same women taking charge of charging, ensuring Chela gets paid even as she refuses to take any money.

The Heiresses (which won the Alfred Bauer prize at the Berlin International Film Festival, and best actress for Brun) is a paen to female friendship and womanhood. Those friends helped form a protective shield around the couple, and continue to around Chela, even as she keeps them safe in her car.

Buy The Heiresses on DVD from amazon UK

*** Read my interview with The Heiresses director Marcelo Martinessi ***