You are here: Home / Film Reviews / The Happy Prince 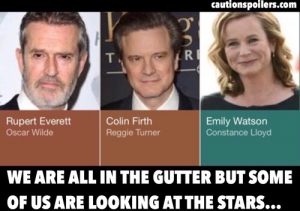 Rupert Everett’s broken Oscar Wilde is sombrely, slowly riveting as he claims to be making plans to reconcile with his wife while at the same time hurtling towards his own self-destruction.

As Oscar remarks to his literary executor, friend and sometime lover Robbie Ross (a believably steady Edwin Thomas): “Why does one run towards ruin? Why does it hold such a fascination?”

Anyone who has read Everett’s hilariously acerbic and rather moving autobiography Red Carpets And Other Banana Skins will know he’s had to deal with his own share of societal hypocrisy: both coming to terms with his homosexuality during and after a traditionally privileged British upper class upbringing; and later forging a career in Hollywood, where being out can still mean an end to playing roles not specifically written as gay characters.

At least by the time Everett reached adulthood homosexuality wasn’t illegal; the brilliant Wilde was brutalised and dehumanised in prison, where he served two years with hard labour for gross indecency.

Everett is writer, director and star here, delivering an assured piece of storytelling which is both bleakly funny and numbingly sad.

Wilde’s story is mostly told in flashbacks covering the three years between his release and his death, though sometimes it harks back wistfully to his years of gilded fame. It isn’t always easy to follow though, even covering such a short timespan. At times it’s hard to work out where we are meant to be and how we got here.

Released from prison, he leaves for self-imposed exile in France, Italy and Belgium. It’s a trip arranged by those close friends who haven’t abandoned him, paid for with condition-bound allowances (his own and other people’s), borrowed money and advances for literary works not yet written.

Men still hover round the writer like moths to a candle flame. Dilettantes, poets, young local men, and old friends from across the Channel, some bringing money, some spending it, some being paid.

Taking and using, indulging his passions, Wilde is not particularly likeable, scrabbling around for money and sex; but he’s lost everything and his health is as broken as his spirit.

He seems on the one hand desperate to start living by convention’s standards, planning to reunite with his estranged wife Constance so he can see his two young children. Yet moments after declaring this he’s putting back together the jigsaw pieces of a ripped-up letter from his aristocratic lover Bosie.

Those few stable friends who still want the best for the deadened genius struggle to be heard among the prostitutes and hangers-on.

His infamy has made him a target too; being recognised could be the precursor to flattery and praise, or threats and mockery.

Meanwhile the Bosie-Wilde-Ross love triangle creates more pain and drama, as Oscar remains besotted with Bosie while steady, sensible Robbie toils in the background. All the gay men in this story have had to suppress love and sexual desire because of the law, but for Robbie it’s more personal, and conventional; Wilde simply does not love him back in the same way.

Lord Alfred “Bosie” Douglas (Colin Morgan, who does narcissistic, needy petulance with great aplomb), is fun but brittle, in love with Wilde but desperately shallow and self-centered, and almost creepy as he advances smiling towards the tearful writer on the station platform when they reunite.

Oscar claims during his exile that “I don’t think I’ve ever been happier in my life”, and away from his own sons, Wilde becomes storyteller to two young brothers he meets on the streets; an illuminative respite for all of them. (Naturally it’s his own short story The Happy Prince – about a statue of a little prince who in life never knew sorrow, but who now, after seeing the misery and poverty around him, asks a swallow to take the gold leaf and jewels from his body to give to the poor.)

Yet Wilde’s health is declining and penury beckons, as he rouges his face (at last, someone worse than me at applying make-up) then heads out to a bar to spend a borrowed £5 on absinthe, cocaine and sex.

This is a beautifully shot film, cinematographer John Conroy adding an evocative layer to an already gripping and desperately sad story. The washed out, almost deserted Belgian beach in cream and beige with a pale, watery blue sky, a team of Young English cricketers adding to the palette as they play on the wet sand; shadowy, down-at-heel palazzos with stone walls and ironwork furniture; Wilde in bed, his head wrapped in a white bandage like a medieval cap, his red coverlet contrasting with his white shift, topped with heavy set features and rheumy eyes, like a 15th century pope too sated to get up.

As a director Everett is wittily coy about all the sex Wilde and his friends are having. Even the male nudity is mostly of the candle-lit buttocks variety, as men sit cradled on each other’s laps or curled up together beneath gauzy drapes.

And those mouths! They should have their own Oscar category, from Bosie’s petulantly plump lip to Oscar’s down in the mouth jowls.

Colin Firth has a smaller role than I expected, reliable as ever as Wilde’s long-standing friend Reggie. in fact the cast list is stuffed with well-known names in what are sometimes little more than cameos, as Wilde’s ability to illuminate the darkest corner of the room and then fill it with his own genius threaten to take over every bit of the movie: Emily Watson as his betrayed wife Constance, Beatrice Dalle (Betty Blue) as a cafe owner, and a fabulous last-minute turn – like those indulgently rich truffles they give you for free in posh restaurants when you’ve already paid your bill and left your tip – from Tom Wilkinson as a Catholic priest. Father Dunne has seen it all, and has dispensed with fire and brimstone accusations for his broken, dying flock in favour of genuine humanity and occasional flashes of dark wit.

Everett is terrific as Wilde, who he plays as a master of self-deception, after years shining a satirical light on Victorian Society. He’s partly hidden behinds prosthetics and padding, as the stoutly imposing and neatly turned out Wilde gradually becomes heavier and more shambling, desperate not to be seen, his jowls growing and his hair lank and greasy.

Yet despite his traumas Wilde is always witty, even as the end draws near: “I’m in mortal combat with this wallpaper, Robbie” he says as he lies on his sickbed against a particularly virulently decorated wall. “One of us has to go.”