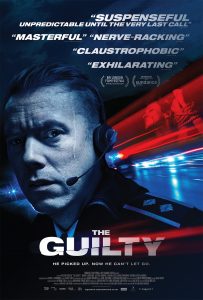 *** Check out my interview Jakob Cedergren, star of The Guilty ***

“I have blood on my hands” says a character in the taut and dread-filled Danish thriller The Guilty over the phone, and it’s a chilling moment.

We don’t see any of the fear or horrors that unfold in the movie, as all the dialogue – bar the odd office chat – is via phone conversations.

Everything about Möller’s film is mobile phone-related, but when we can’t see the action or the characters in the story, neither can emergency services call-taker Asger Holm. We and he are creating in our own minds, drawing pictures based on what we know and filling in the gaps of what we don’t.

It’s a chilling realisation, when the penny drops for us and him; and the gradual dawning that we may be linked to him also by our complicity is deeply uncomfortable.

Set in an emergency services responders office, with quiet groups of people answering calls, we never leave the setting.

Asger (Jakob Cedergren) is nearly through his shift. His responses to callers are boredly pompous but also witty – some of them he’s spoken to many times before, and they’re often timewasters.

But he’s also very sure of himself, and of right and wrong, an arbiter of justice as he decides whether to help them. It’s confidence that will take a battering over the movie’s running time.

He’s mostly calm, though there’s a brief losing-his-cool moment early on when he’s called by a journalist, something about a court case tomorrow. And he chats to his boss in another office about wanting to be back on patrol.

It’s funny but also an uneasy watch, that confidence as he forces troubled people to take responsibility for their own screw-ups (“but it’s your own fault isn’t it” he tells drugged up Nikolaj, who’s called in yet again after taking an unknown substance and sounds scared and confused).

He slowly and deliberately teases out from one man, surprisingly reticent about how he came to be mugged in his own car, that he’s in the city’s red light district.

Asger’s ability to do his job effectively is dependent on his own understanding of the rules, processes and boundaries of his job, and on the mobile technology which tells him where people are, based on the nearest cell phone tower. (I’ll admit this worried me a bit. Is it really that easy? I don’t mean the technology, but the access to it.)

But soon he finds even this isn’t enough, as he receives a call from Iben (Jessica Dinnage), a panicked woman who says she’s been kidnapped by her violent ex-husband. Iben is terrified and disoriented and Asger has to help her tell him as much as she can without the perpetrator realising.

He gets her to pretend she’s calling her child; she and he soothe and cajole while he asks yes/no questions and she tries to answer. Eventually he finds out she’s in a white van, and you can almost see his heart sink. She keeps ringing off, and Asger becomes emotionally involved in her rescue, and offering confident reassurances he can’t necessarily fulfil.

But as the story unfolds and Asger’s boundaries crumble, he also becomes deeply ambivalent himself.

The lighting becomes more jarring, leaving half his face in darkness and the other illuminated. Red lights come on. Soon, refusing to go home after his shift, he moves into a small room to continue the calls, a space he makes even darker and more private when he pulls down the blinds on the windows that look into the main office – isolating himself until the lack of anything else to look at forces him to look at himself.

As well as talking to Iben, Asger has several other conversations going around her case. The woman responsible for coordinating the patrol-car search based on his information is curt and brisk, and doesn’t seem particularly impressed with him. It seems a lackadaisical approach and I was writing the “this must never be allowed to happen again!” headlines in my head as what I initially took to be boredom but was probably caution coloured her every utterance, while poor Iben was still missing.

Then there’s his friend and colleague Rashid (Omar Shargawi), who is something to do with the upcoming court case and is getting tired of being ordered around.

The most touching exchange is a three-way conversation between Asger and little Mathilde (Katinka Evers-Jahnsen), the six-years-and-nine-months old daughter of the kidnapped woman. Home alone, she gives glimpses of what her father Michael, who isn’t supposed to see her, did to her mother when he appeared on their doorstep that day. Asger sends the police round to help her, and officer Tim searches their trashed house, giving a sparse running commentary that becomes more heartrending as he trudges around.

There are plenty of twists and turns in The Guilty, some of which I should have spotted but didn’t.

Director Gustav Möller has delivered a taut thriller that’s an exercise in steadfastly-driven anxiety, the odd bleakly funny line thrown at us to give us a moment’s respite. The single setting never looks like a conceit, the parallels never feel forced. Some of the actions make no sense, as we learn more, but I only realised that later.

Cedergren is extraordinary as Asger becomes trapped in a web of assumptions, spun himself from hubris.

There’s no escape, as every physical and mental change is focused on and drawn out. Every increase or decrease in tension, every note of hope and terrible realisation, and finally his awareness of his own role in the whole mess, is played our across his cheeks, his forehead, his eyes.

It’s an astonishing performance of a man watching everything collapse around him and only realising he has to take responsibility for it when he can’t affect events anymore.

The Guilty has a running time of only 85 minutes, and for such a dialogue-driven piece it canters along at quite a pace. So much so that it took me a while to question whether or not I might be backing the wrong horse.