You are here: Home / Film Reviews / The Gospel According To André 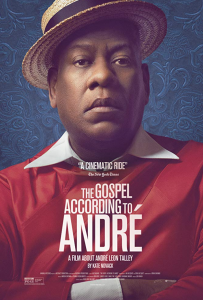 Fashion, that most ephemeral thing, is to some akin to a religion, its best prophets dazzling us with catwalk collections that inspire devotion and reverence.

Though genuine divinity too weaves through this documentary about icon André Leon Talley (already I’m co-opting the language of churches and saints).

Talley – fashion writer, editor and expert on fashion’s art influences – is originally from the American South, where church didn’t just mean turning up on a Sunday.

As his friend, theology professor Eboni Marshall Turman says “we would bring our absolute best to God”. That meant Sunday best outfits, smart gloves. (Marshall Turman is terrific – an enlightening speaker and a fashion aficionado.)

In later life, and larger than life, he sits on a stage being interviewed by journalist and friend Tamron Hall. In a scarlet robe, decorated with an enormous jewelled pendant, he looks like a pope – here to dispense blessings and guide us in how to live our best fashion lives: “it’s a moral code to dress well”, as he tells us elsewhere in the film. He’s all-knowing though he probably wouldn’t admit it, and he knows everyone; thanks to a fashion career that has taken him around the world (for Vogue and Women’s Wear Daily among others). Anna Wintour is a talking head, Diana Vreeland is often mentioned.

As an African American, racism swirls around Talley’s life story. At the hat shop growing up, black women had to wear hairnets as they tried on the merchandise, while white women did not.

The Gospel According to André is a look back as much for Talley as for us: his childhood, and revisiting old shoots and collections, long-ago published pictures jolting his memory.

This is a thoroughly entertaining look at the man and the world – both offer glamour, style, gossip, and fame, with a back story of hard graft and struggle. “Is fashion art? No” he tells a reporter, not because it doesn’t have worth but because it’s about craft and hard slog. Later he comments that “I make it look effortless… but it’s been rough”.

Talley’s knowledge adds heft and history for those of us who may have come for the style and the fabrics. But ultimately we never get too deep within the psyche of the man (though I did get more from it on a rewatch – it’s a film that deserves a second look).

Director Kate Novack just touches on what he has given up but not really on how this affects him now: love, and having to create a persona, an added stress that the traditional privileged employees of fashion magazines probably don’t even register.

Despite his love for fashion and its influences, it’s when Talley is talking about the prejudice he’s faced that we get closest to him: recounting the racist nicknames supposed friends have for him; and his face when the worst happens and Donald Trump beats Hillary Clinton to the American presidency. (He’s still, though, fascinated by Melania and her design choices.)

In a world where privilege is often a starting point for a career, Talley levers fashion’s influence for change. A Vanity Fair spread he curates spoofs Gone With The Wind so the servants are white, and the wealthy and influential characters are black. It’s stunning and moving, and disruptive – with an extraordinarily beautiful Naomi Campbell as Scarlett O’Hara.

He’s a wonderful talker. His extraordinary knowledge of fashion and art give his reviews and writings heavyweight status in a world that to outsiders looks to be composed of gossamer, smoke and mirrors.

Talley is certainly accepted by the people who matter; his knowledge, talent, abilities (he speaks fluent French) and ability to connect see to that. “André is one of the last of those great editors who knows what they’re looking at… knows where it came from” says Tom Ford. But that this documentary exists demonstrates how unusual it was for a black man from the American South to end up critiquing couture in Azzedine Alaïa’s Paris apartment.

His childhood was tough; his grandmother brought him up, driving him to excellence. He constantly references her, while Vogue, which he borrowed from the local library, showed him another world.

Friends help put his life – his visibility in a mainly white world, and his refusal to conform – into context, as they talk about how far they’ve come as black Americans. Tamron Hall, whose grandfather was a sharecropper, can’t quite believe she’s off to Obama’s farewell White House dinner in a gorgeous silver dress, made perfect thanks to Talley’s attention to detail.

Even if we never really get to the bottom of Talley, listening to him reading from his own reviews, watching footage of the long-ago shows he’s referencing, or archive film of black women dressed up for church, is entrancing. (His own fashion choices are stunning, playful and wide-ranging – a brightly patterned kaftan, a smart fitted suit, a red padded jacket and oversized chain, a gold turban.)

Ironically, nostalgia is increasing as the world hurtles back to the worst of decades long-gone. The present is influencing how we critique the past, too. 30 years ago I’d have looked at these 70s catwalks full of satin and pussy bows and flares, and while I’d have appreciated the craftsmanship, the actual styles would have left me cold. Now I’m positively salivating over those same shapes, styles and colours. How has fashion managed to sell me styles I previously mocked?

It’s an industry whose fashion press at its best aims to elicit an emotional response: “André could always make the reader feel that dream, and feel that emotion” Wintour says. But we never really hear about when that turns into manipulation, or much at all about fashion’s dark side. Tom Ford talks about the “enhanced reality” of magazines. Even Wintour states that no one needs another handbag or sweater, which is why emotion is used as a lever to get us to shop.

Talley is like an iceberg floating serenely on while (mostly) hiding the hard work, the knock backs, the racism, the changing wants of a capricious audience, and even ageing. But how does he feel now? After a lifetime in an industry maligned as shallow, how much did it support him and how is he coping now in retirement, without that structure around him?

His influence is clear though. The idea of Talley as a black superhero dances through this documentary well before it is explicitly stated by Hall. And as Talley is a lover of a particular garment associated with superheroes it would be remiss of me not to state than actually some superheroes do wear capes.

Buy / rent on vod from amazon.com

Watch the trailer for The Gospel According to André: