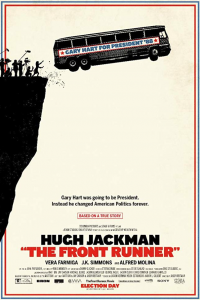 It is a marvel, thick and brown, and considerably wider than his head, the odd strand tipped with silver. It shouldn’t matter but it does, and Jason Reitman’s film holds up to scrutiny what is expected of our leaders, from good looks to monogamy.

It’s not just the politicians he questions. Spin doctors, election teams, and the press see their ambivalence dragged into the sunlight, in this exploration of the circumstances that brought Hart to his political knees back in 1988, after an affair with saleswoman and model Donna Rice is discovered.

Reitman doesn’t come down on one side or the other, reflecting the many grey areas of political life even among those we think of as the good guys.

Nearly everyone appropriates worthy arguments to defend themselves. To be fair it’s hard to see a bigger picture at the time, especially amidst the spin doctoring. We need the before-and-after to put these themes into context.

It sounds as if the democratic nomination is Hart’s to lose. He’s good at the big slogans: “the world changes when young people give a damn” he says, hoping that they give enough of a damn about not giving a damn about his private life.

Hart (Hugh Jackman) doesn’t do personal with the electorate, though he’s an excellent policy maker and happily treks out to areas of the country nobody has bothered with before, even taking part in an axe-throwing contest, mocked by the urban campaign team until he scores a bullseye.

It’s all going so well! Until a Miami Herald journalist receives an anonymous phone call from a woman claiming her friend is heading to Washington that weekend to be with Hart. He dismisses it at first; Hart’s schedule doesn’t match. But then he finds a fax with the new weekend timetable and his shock at what he could have so nearly missed is palpable.

The 80s setting is more than just an nostalgic look at ancient tech and Wrigleys stick chewing gum. It also shows the difficulties in responding quickly to events. When the Miami Herald journalists first see Hart and Rice going into and out of his Washington townhouse they don’t even have a photographer with them.

Rice is a footnote. Poor Donna just wants to keep the news from her mother; no one tells her that won’t be possible and even 30 years later her name will raise eyebrows. She’s treated appallingly by Hart’s team. Trusting and naive, desperate to convince everyone she’s not a bimbo (god it’s years since I’ve heard that word used), she thinks she’s built a genuine friendship with campaign worker Irene Kelly (Molly Ephraim). When she leaves to return home, they say goodbye and Donna heads down an escalator only to find herself in a sea of reporters thrusting microphones into her face and shouting at her. Turning around in panic, she finds Irene has disappeared (Ephraim is excellent as the increasingly troubled Kelly).

Hart came along after the astonishing sexual shenanigans of JFK, information kept from the general public, presumably because of fears they would care. (There’s a great scene where newspaper veterans are reminiscing over Lyndon B Johnson coming into office after his predecessor’s death, requesting the same discretion over his own affairs as Kennedy was given).

Now we have an adulterer in the White House and our own Boris Johnson over here. Has the mood changed? Why are the politicians getting away with it right wing, the spiritual home of one-dimensional family values? I didn’t feel Reitman traced a line from then to now. Though the question of press intrusion is still pertinent, and our tendency to idolise young, glamorous and inspiring politicians then be surprised they have feet of clay.

This isn’t a sympathetic portrait of Hart; his hiding behind solid arguments for a less prurient press is highlighted, as is his treatment of Donna and Lee. The press too sometimes comes across as hypocritical (though not Alfred Molina’s Ben Bradlee of the Washington Post, who explains why the unfolding story is becoming something they must cover).

Hart has pertinent things to say about lack of privacy stopping talented people from seeking high office. But it’s pretty clear this – while true – is also a cover for his own behaviour, self-righteous indignation to hide his marital indiscretions.

Plenty of people think it shouldn’t matter. It falls to a woman to put the other side: that a pattern of behaviour that indicates he doesn’t respect women or, crucially, understand the power imbalance between them is a problem in a prospective leader of the free world.

The start of the film is confusing (it’s the tail end of the previous road to the democratic nomination in 1983, when Hart came second). The sound quality at the beginning is terrible, sometimes deliberately but not always. The writing is spot on throughout – particularly when newspaper people and political operators sit around bantering about the past and the present, smoking (everyone smokes everywhere).

The Front Runner is a straightforward film (it takes place mostly over three weeks) but it’s also fascinating; as one man’s mistakes leave journalists, campaign workers, supporters and family questioning themselves and each other.

Jackman is masterful as Hart, a thinker, practical politician and smooth communicator when on his terms, brought low by hubris. It’s a supremely nuanced performance as he reveals the flaws that make Hart human, if less and less likeable. Farmiga is impressive, Lee’s decades of internalised pain given a temporary release as she bashes away on the piano, the press closing in.

Mamoudou Athie does embarrassed tenacity to perfection, as AJ initially invests too much personally in Hart and gradually starts to see him for what he is. JK Simmons too is excellent as campaign manager Bill Dixon who has to remind his golden boy about the sacrifices his volunteer team have made for him.

If you’re expecting endless screen cards at the end explaining what happened next, there is only one, and it’s brief. There’s a 90% chance you’ll be googling after watching, though.

Now I’m over 40 I may not remember where I was meant to be five minutes ago but I clearly recall “Where’s the beef?”, Walter Mondale’s dig at Gary Hart’s political ideas and policies during the 1984 race for the democratic nomination. The Front Runner is less solid 100% gourmet burger than nicely assembled (ensembled?) supermarket meat platter, but it’s still a very satisfying experience.

Watch the trailer for The Front Runner: