You are here: Home / Film Reviews / The Endless Summer 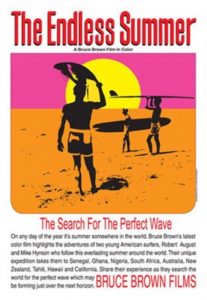 Australia may have turned out to be a disappointment wave-wise, and a worry shark-wise for Mike and Robert, but though Endless Summer came out nearly a decade before Jaws, I had to laugh at the locals’ comment: “Jeez Mike, you should’ve been here yesterday. We had a bigger boat!”

This is a movie that exists in a laid back, golden haze, and while I’m no surfing expert (I spend too long on my hair each morning for that) the style of this documentary is very different to the personal intensity explicit in some more recent surfing films.

Director Bruce Brown also narrates, with a soundtrack from the Sandals of those perfectly bouncy 60s summer tunes that belie the incredible upheaval and change the decade brought, both socially and politically.

There is no spoken dialogue from Michael Hynson and Robert August, two young men who have decided to leave the decidedly wintry Californian ocean to follow the sun and the surf round the world. It’s a trip that takes in Senegal, Ghana, Nigeria, South Africa, Australia, New Zealand, Tahititi, and Hawaii.

And it is very much about the sun, the surf, the local population and the wildlife. There is only really one instance of any kind of political commentary, when Brown slips in that “sharks and porpoises have yet to integrate in South Africa”.

Riding the perfect wave is their objective but they are sanguine abut missing great surf by days or even months. There’s always another beach, and once they reach South Africa’s Cape St Francis, they know they’ve achieved their aim. Finding that wave is a “10 million to one” chance, but after surfing down the sand dunes to the beach on their boards, “on Mike’s first ride, the first five seconds, he knew he’d finally found that perfect wave”. It’s long and slow, and he’s in the curl for a full 45 seconds.

Brown has a deadpan wit and even when a joke falls flat (or time has made it inappropriate) he is straight onto the next one. Sometimes his humour is endearingly amateur as his subjects act out his gags – preparing for their trip Mike and Robert are filmed reading a book called “Shark Attack, Field Dressings Illustrated”,  and their packing is claimed to be only “six pairs of trunks, two boxes of wax, some modern sounds and in case of injury, one bandaid”. The last screen thanks King Neptune for the waves.

And usefully, among the quips are instructions about surfing: about staying in the curl, or the dangers from runaway boards caught up in the immensely strong waves. It also bellies the myth that surfing is always a warm water pursuit, with winter temperatures in some places dropping to 48F (about 9C, Brits. That’s pretty much what my recent August beach holiday in Wales was like).

But it’s a narration that is littered with casual unthinking racism that, while it might have been normal for its time, is spectacularly jarring now – likewise the jokey misogyny, which is less prevalent but still sigh-inducing.

It’s November when Mike and Robert set off for Dakar in Senegal, dressed in identical smart suits and carrying identical surf boards. On the first leg of their journey, his subjects looking thoughtful on the plane, Brown intones “Would they find surf? Would they catch malaria? Or would they be speared by a native who didn’t have any idea.”

Local kids come to watch the surfers, and “being good Africans they threw a few rocks”, says Brown, but the city is too expensive, so it’s off to Accra in Ghana two thousands miles away.

Despite the comments, Bruce, Mike and Robert are clearly impressed by local people’s abilities in and on the water: from the speed with which children and adults alike pick up surfing once they are on the surfboards, to the enormous fishing canoes hollowed out from a single log. There’s also extended footage of local men surfing – it’s not all about the white boys, not in Ghana anyway.

Wildlife features strongly, from the underwater perils of deadly stonefish in Nigeria to being chased by a zebra in South Africa. And it’s while trying to hitch to Durban that they meet Terence, who drives them thousands of miles out of his way and whose jobs include milking poisonous snakes of their venom.

But don’t forget the sharks! South African beaches may be netted, but venture from the main beach and “the odds are 50/50 you’ll be killed by a shark”.

The Australian flies don’t help: “you go onto the beach and there are 30 flies assigned to your body” deadpans Brown. “When you leave they go back to Command Headquarters and wait for another assignment”.

They don’t reach Hawaii till near the end. The waves are beautiful but terrifying. Surfers risk major injury as they ride the Pipeline waves that can break a board, or a person. “No one laughs in the Pipeline, they wait and see if you come up again”.

It’s as much travelogue as search for the surf. The busy sands in Ghana as women with perfect posture balance bowls on their heads, and the enormous fishing catch is bartered; dusty cars and tiny trucks chugging along baking roads as the young men wait for a lift; camping out in New Zealand eating just-caught trout.

The Endless Summer’s attitudes are dated: the casual racism grates, as does the leering camera aimed at women surfers in their bikinis. But Brown, Hynson and August are genuinely curious about the places they visit, and respectful of the abilities of local men and boys who know the sea intimately – even if Mike and Robert never seem to delve into much more than the state of the surf or the local wildlife.

Or I think so, anyway. The staged jokes highlight how little we really find out about the two men. The come across as likeable and genial, but we don’t hear them speak, and we never really find out if their road and plane trip cements or damages their friendship.

But taking surfing away from the usual locations and people – Hawaii, California – gives it something more. And despite its sunny disposition, Brown’s passion is clear.

Ultimately he’s created an iconic film, as long as you accept that it is truly of its time in every way. And considering its tiny budget, it boasts cinematography that is still both engaging and exhilarating.