You are here: Home / Film Reviews / The Duchess 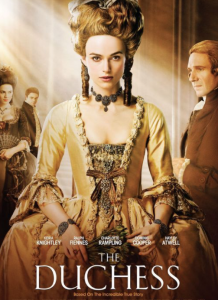 Freedom is an absolute, the just-married Georgiana tells Whig politician Charles Fox in the 1770s, when it turns out that his progressive ideas to share power and wealth more equally among Britain’s citizens only really work for him if some are more equal than others.

Sadly for Georgiana (Keira Knightley) her own freedom within her marriage is always qualified, despite her constant attempts to carve our a life of her own and proper autonomy.

Her union with the hugely powerful Duke of Devonshire (Ralph Fiennes) almost destroys her, while for him it’s business as usual, their marriage a transaction with both parties expected to carry out their duties.

Georgiana’s is to provide him with a son, and like many men he presumes her pregnancies will result in such then blames her when he’s given another chubby, gorgeous little daughter.

(He already has one daughter, Charlotte, from an affair with a woman who has now died; the girl is to be brought up by Georgiana, a situation that she rises to admirably but for which she gets no credit from her husband.)

Based on writer Amanda Foreman’s bestseller, this is the true story of Georgiana, Duchess of Devonshire, a woman traditionally described as complex as she fought against the confines of a loveless marriage and a society that left even aristocratic women with almost no agency.

Though was she really that complex, or is just that women aren’t allowed to be three-dimensional, to be clever and motherly and enjoy spending and gambling, and sometimes screwing things up? She’s certainly a woman who continues to battle for her own freedoms against people happy to use her.

When the teenage Georgiana finds out from her mother that she is engaged to the Duke Of Devonshire she’s naive in the extreme and clueless about what awaits her; partly because she’s been brought up in a household with particularly loving parents. “He loves me? I’ve only met him twice!” she cries, eyes shining with delight, completely unaware of the transactional nature of marriage at that time. She’s been enjoying a youthful flirtation with Charles Grey (Dominic Cooper), a relationship which re-emerges years later.

Their wedding night isn’t much fun for her. She’s not even 18, embarrassed when the Duke undresses her, stripping away the layers of satin and lace, the linen and the wooden panniers that make her dress stick out, not just her protection but the only way she has to express herself. Paradoxically she’s less herself when nearly naked than when dressed.

(“Patience, fortitude and resignation” says her mother, listing the qualities she needs as a wife, there only to produce an heir; and her response to Georgiana’s questions about intimacy are met with “I know! It can be a bother!”)

Her husband seems uninterested in her beyond providing an heir; The subtle and subdued Fiennes is excellent as the world-weary Duke who, when he finally does try to bridge the gulf between them, is unable to reach her. Understanding that it’s impossible for one person to push back against the system, the Duke also benefits immensely from those rules and from breaking her.

It’s in Bath where everyone seems to go to take the waters that Georgiana meets Bess Foster (Hayley Attwell), a mother of three boys whose estranged husband will not let her see them. Georgiana invites her to stay with them and the two women form a deep bond that lasts until Georgiana’s death, despite Bess’s ongoing affair with the Duke. It’s a strange menage a trois, one which only seems to work because of Georgiana, though in reality she has little choice.

Their friendship though is a mixture of love and brittleness from the beginning, a battle of conversational wits that delights one when the other scores a direct hit.

The film’s marketing campaign drew flack at the time for pushing the rather tenuous link between Georgiana and Princess Diana, though they were both lambs to the slaughter in their marriages, and both won and lost in the court of public opinion as they battled for their freedoms. At times it becomes heavy-handed in its attempts at allusion. The Duke, asked if he loves Georgiana, replies “in the way I understand love” – a clear link to Prince Charles’s “whatever love means” pushback when he was asked if he loved his fiancee Diana.

Luckily it is rarely that clunky, and they mostly just feel like appropriate parallels. The Duke and Duchess’s life together is that of modern-day celebrities: when they visit London the carriage is followed by excited residents. Soon she’s a fashion leader, and a political one, joking to a cheering crowd that the bird that produced the huge feathers in her huge hat are now standing for public office under the Tories. (The film rarely focuses on her politics, though, despite the real Georgiana’s activism, which is a shame – her push for freedom is focussed on her personal life.)

Knightley shines as Georgiana, taking her from carefree girl with loving parents to ignored wife and then motherhood, which she excels in. It’s a hugely sensitive and honest portrayal. The Duchess’s devastation when she spies the Duke playing father to Bess’s three boys, while Bess sits next to them smiling and kissing his hand, is heartrending.

That moment though is nothing to the devastation when Georgiana is forced to give away her illegitimate baby Eliza, whom she conceives with Charles Grey while still married to the Duke. On a windswept moor she and Bess meet with the Grey family’s servants to hand over her silk-wrapped bundle, in a scene that had me sobbing.

Costume director Michael O’Connor won an Oscar and a BAFTA for his work on The Duchess and it’s easy to see why. The scale of opulence is extraordinary, mixed with incredible attention to detail.

While the film itself becomes stodgy and weighted down in the middle, the changing fashions keep it buoyant. They become less visibly luxurious and ostentatious, moving into that era where the rich played at rustic living, with dresses simpler and prettier (though still expensive!). When Georgiana hands over her baby she’s wearing a floral sprigged white dress, her hair less formal, and it takes us further into her raw, maternal horror.

We even see Georgiana in a maternity dress (grey satin with a fur stole tied round it) which you hardly ever spot in period dramas despite both society’s obsession with producing heirs and the sheer number of pregnancies a woman might go through.

And even with the delicious richness of the early film, before Georgiana marries her clothes still have a freshness about them as she runs around the gardens with her friends, with none of the weightiness of her married dresses – or married life.

but / went the duchess on vod or buy the dvd/blu-ray from amazon.com

Watch the trailer for The Duchess: