You are here: Home / Film Reviews / The Disaster Artist 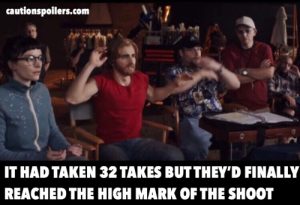 Acting is all about exposing one’s true self, as coach Melanie Griffith points out – and Tommy Wiseau certainly takes this to heart, in every sense. Once starring in his directorial debut The Room, he insists on stripping off, refusing requests for a closed set and wandering round naked but for a cock sock. He’s utterly determined to show his buttocks on screen during a love scene, because “I need to show my ass to sell this picture”.

A 1980s vampire with an Eastern European accent to match, he insists it’s actually genuine Louisiana. He’s extraordinary to look at and certainly has some kind of presence, even if, as one of his many acting teachers points out, it’s a malevolent one. But Tommy also has a heart (“I do this whole movie for you, Greg”), and is genuinely hurt when people laugh at him, which when they’re not staring at him open-mouthed is quite a lot.

“You have to be the best you can be. And never give up” says Tommy (James Franco) to Greg Sestero (Dave Franco), and if what he’s trying to be is an enigma he certainly succeeds.

In terms of his acting and directing, all I can say is that Wiseau may well be the best he, personally, can ever be. But while the best you can be isn’t the same as being the best, if Tommy had given up we wouldn’t have his cult classic The Room, also known as the worst film ever made, but amazingly (and rather gratifyingly) now in profit; or The Disaster Artist, the film of the making of The Room and based on Sestero’s book.

The Room isn’t meant to be funny, though it is. The Disaster Artist is hilarious, but it’s also very sad in places and is best described as a tragicomedy, and not just because you’ll be crying with laughter as Wiseau’s character in The Room tries to shoot himself.

Playing a bad actor making a bad film is always going to be tricky. But James Franco, who as star and director has to do both, nails it. The easy route would be to go way over the top, and make Tommy simply a figure of fun, but his film expertly treads that fine line between affectionate send-up and cruel finger-pointing (even if at times Tommy’s behaviour makes finger-pointing deserved).

Franco’s double act with real-life brother Dave is bizarre yet touching, with Tommy and Greg’s friendship as mystifying to Greg at the end as at the beginning.

Meeting at an acting class, indeterminately-aged Tommy and 19 year old Greg become firm friends, eventually moving together to Los Angeles. They introduce each other to their different film worlds: Greg shows Tommy his favourite James Dean movies; Tommy suggests Greg accompany him to acting classes run by Konstantin Stanislavski, the acting coach who died in 1938.

Neither are having much success acting, Greg possibly because of his orange hair and Tommy possibly because he can’t act. So Tommy decides to write and direct his own movie. The result is The Room, a romantic drama about banker Johnny and his future wife Lisa, who ends up having an affair with Johnny’s friend Mark.

Wiseau has money to burn – from where no one is sure – and instead of renting the hugely expensive equipment he buys it, not once but twice, deciding to filming on digital HD and 35mm which then requires two crews.

The casting calls are a hoot as actors and actresses struggle to follow the two men’s confusing instructions, but eventually the role of Lisa is given to a a sweet and open-minded actress called Juliette (a delightful and touching performance from Ari Gaynor), while Tommy is to play Johnny and Greg is to play Mark.

His finished film is terrible, with subplots that don’t go anywhere and more loose ends than my knitting, and no one working on it has a clue what it’s about.

As a director Tommy’s a temperamental monster. Always late, he refuses to buy water when the set is 100 degrees, and likens himself to Hitchcock in terms of his bullying behaviour. As an actor he’s worse, the famous “Oh hi Mark!” scene taking dozens of takes and resulting in cheers and high fives when he finally remembers his lines.

The cast and crew laugh at him behind his back (“They are not grateful, nobody respect my vision!”), which he knows about; and deliberately use his director-only toilet, which he doesn’t.

Astonishingly the film is eventually completed. The audience at Tommy’s self-funded premiere moves through anticipation, bafflement, horror and eventual delight (and near-hysteria) as they finally decide for Tommy, the cast and crew what The Room is actually meant to be.

Poor Juliette, all dressed up in evening gown and huge sparkly earrings, is initially devastated: “Is this still going?” she asks bitterly through her fingers, until she too notices the audience’s changing reaction.

The Disaster Artist is a blisteringly funny film, but it’s also moving and rather sad, as Tommy’s cast and crew try to understand his vision, and he tries to understand the public’s reaction to his finished movie – and save face.

The mid-credits scenes are a must-watch especially if you haven’t seen The Room: original scenes from that film are played side by side with The Disaster Artist‘s version, demonstrating just how carefully Franco worked to replicate the original.

buy / rent the disaster artist on amazon video or buy on dvd or blu-ray from amazon.com

Watch the trailer for The Disaster Artist: