You are here: Home / Film Reviews / The Courier 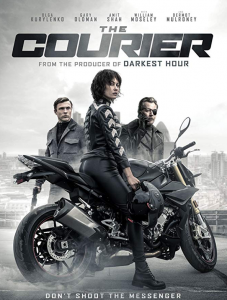 Were it not for Olga Kurylenko I’d have had to call someone to come and collect this movie.

The bright spot in The Courier is, er, the courier. Kurylenko’s character never has a name, but she’s the kick-ass centre (maybe even the heart) of this below-par thriller, when most of those around her are flailing.

With the exception of Kurylenko and Amit Shah, who plays mild-mannered police protection witness Nick Murch, the performances are as dull and uninspired as the concrete underground car park where this film is mostly set.

In his violet v-neck jumper, Nick could be cartoonishly useless, the wet blanket boy accidentally paired with the tough woman – luckily Shah keeps Nick on track as someone who, while he’s entirely out of his comfort zone, is not a complete dead weight for his saviour. His scenes with Kurylenko are the best in the film.

Gary Oldman, the star power in the movie, is dreadful as Ezekiel Mannings, the kind of gangster who moves in the top stratum of society and seems Teflon-coated when it comes to the authorities trying to bring him to justice. 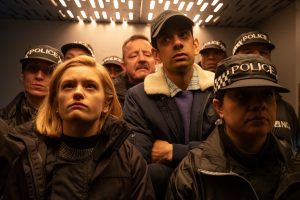 Mannings is finally under house arrest, with star witness Nick, in police protection in the UK, about to give evidence via video link from London. A vast team of agents and security staff are tasked with keeping Nick alive, led by double-crossing Elisabeth Moss lookalike Agent Simmonds (Alicia Agneson).

Simmonds has arranged for a courier to deliver a cyanide bomb to the secure room, designed to take out Nick and his protectors. But the nameless, leather-clad courier fights back, reluctantly teaming up with Nick to get him to safety – involving an endless chase around the carpark between the pair and Bryant (Bill Moseley), backed up by Mannings’ henchmen. Most of the action takes place there, an incongruous slice of British urban planning where no one else ever goes. 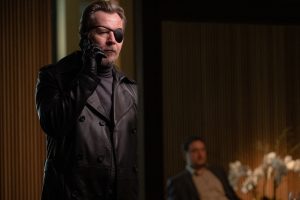 This is a film that wears its debts to better, leaner, ultra-violent thrillers heavily. There are double crossings galore, and lots of thuggery. At one point I had to turn away. There are no redeeming features to the violence; no dark wit, no beautifully choreographed action, no sense of heightened reality to make it enjoyable. Just beating, punching, smashing against a car. (I will concede that the final death is pretty cool though.)

Motivations and actions are often baffling. Victims about to be shot by Mannings just sit there looking horrified, in one instance actually uttering the words “I’ll do anything!” 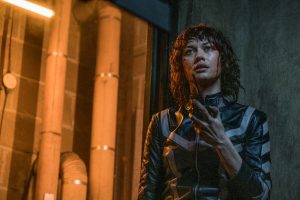 Olga Kurylenko as the courier

And if you’ve been missing any low grade thriller clichés, then you’re in luck because I’ve found them in The Courier. Mannings is both scarred and sports an eye patch; he wears a patterned silk dressing gown while threatening employees who have failed him down the phone. Or he sits in his chair, eyes closed in paroxysms of pleasure, as classical music plays. It’s a lazy performance; hammy but not hammy enough, one that could have been enjoyable if he’d cranked it up more. Instead it’s just one more dodgy element in a movie stuffed with exploitative violence and genre tropes, derivative of sharper, more exhilarating thrillers.

It’s not actually very thrilling, as Bryant and his men search for the courier and the witness. Car parks aren’t exciting places, and nothing has been done to shoot this in an exciting way. The dialogue is often awful: “I will rain hell down on you, you piece of shit” says the courier.

The courier’s motivations are vague, despite lacklustre black and white flashbacks to the loss in her life; you never get a sense of who anyone really is. (Which makes it all the more impressive how constantly watchable Kurylenko is, and how despite the film’s flaws I ended up rooting for her.) 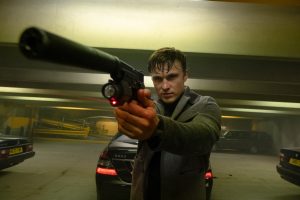 Many of the performances are below par. Mannings’ beautiful daughter Alys (Calli Taylor) wanders arounds in designer outfits pulling rank with goons on her dad’s payroll. Agents and prosecutors have badly-acted phone conversations. At one point Oldman looks enigmatically into a mirror and take off his eyepatch but there’s no sense of reflection for the character.

The Courier is messy and unfocused, with occasional glimmers of what could have been – a pithy and taut low-budget actioner. There’s believable chemistry between the courier and Nick (of the partners variety) and with a better script and maybe some black humour even the violence might have come across as electric rather than deadening.

Kurylenko is, excuse the pun, the full package. She’s an effective and determined action heroine, bringing to her nameless character a real sense of the weight of her past. The snippets of information we get about her – that she’s ex-military, and exists off-grid – are designed to make her an enigma, but this film could have been so much more, her charisma utilised much more effectively.

It’s just a shame that the script and direction don’t capitalise on their best asset.

order the blu-ray from amazon uk

order the dvd from amazon uk

Watch the trailer for The Courier: