You are here: Home / Film Reviews / The Beach Bum 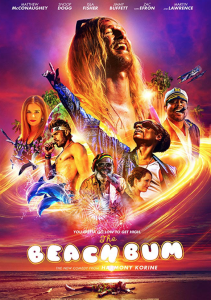 A genius at geniality, Moondog, a middle-aged slacker poet with a very rich, very accommodating wife, has the life many people dream of.

Most of the time he’s chilling on his boat, surrounded by equally good-natured half-naked women, who lie around smiling cheerily while he bangs away on his scarlet typewriter. (“A Van Gogh with words” his agent later tells him.)

Moondog takes sex where he can find it, which is most places, at one point shagging a woman from behind in a bar kitchen while slapping her bottom with a palette knife.

This is a good-natured, bouncy movie, filled with good-natured and bouncy people, all existing in their own bubble, where no one seems to need to go to work. (At the very least this film should be a wake-up call for those miserable sods who also don’t need to go to work, yet are still gloomy and leaden. If you’re rich and lazy at least look like you’re having fun.)

When Moondog (Matthew McConaughey) returns to wife Minnie (Isla Fisher) he ends up performing oral sex on her while she’s having her nails done. What can I say, women are good at multitasking and it beats writing a shopping list in your head.

She’s lovely and loving, and understands her husband better than he knows (“You just have to kind of accept he’s from another dimension” she says to their daughter Heather.) 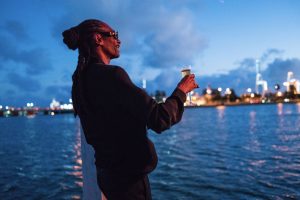 Minnie is arranging Heather’s wedding, and having a highly enjoyable affair with the supportive Lingerie (Snoop Dogg), a drug dealer who shares with Moondog an almost mystical relationship with weed.

Heather’s fiancé is extremely dull with a terrible haircut but is unlikely to wander off with a smiling half-naked woman or try to write poetry when he should be at work.

Even with Minnie’s cheery hurrying-up, Moondog can’t get to Heather’s wedding on time, but everyone forgives him because he’s just so good-natured. After the ceremony and party he and Minnie have a lovely evening on the waterfront, drinking and getting stoned.

It’s a gorgeous montage, set to Is That All There Is by Peggy Lee, an insight into their marriage and how it works that centres the whole movie.

As she twirls along the waterfront in her long purple dress they reminisce in flashback over their highly successful if unconventional relationship.

It’s their own perfect ending, as on the way home Minnie crashes their car and dies. Her death scene in hospital is unbearably poignant – pathetic in the original sense of the word – as her stoned husband looks at her for a tiny moment utterly bereft, realising in an instant what has gone.

Even after death Minnie is in charge, her will ensuring he can’t control his inheritance until he grows up and publishes another book. A man whose journeys mostly involve going round in circles in a boat or finding the nearest bar, surface thoughts instantly regurgitated into his typewriter, for once has to properly look at himself. 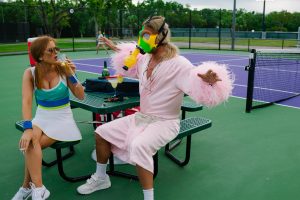 Being a beach bum is a luxury mostly granted to men and it’s telling that Minnie – while I’m not going to suggest she’s enduring a life of struggle while she drinks champagne and enjoys her $100 million fortune – is looking after him.

The performances are top notch – Isla Fisher is a delight as usual, and Snoop Dogg slots in perfectly as the never-jealous facilitator ensuring their marriage continues. Heather, while a more modern version of Minnie, also has a touch of Absolutely Fabulous‘s straight-laced daughter Saffy about her, admiring her talented dad but also, in her preppy and slightly dull outfit, warning him that he has to improve.

McConaughey is hugely entertaining and often affecting, Moondog’s cheery charm suggesting any successes are because of his advocacy of a relaxed, unthreatening way of life, rather than being rich.

The Beach Bum is a riot of nighttime colour, a world illuminated with magenta and blue, and sunny Florida days on the sea or the beach. And it really does feel bubble-like, from the small, not particularly glamorous wedding to Moondog’s boat parties to a prestigious ceremony he attends in what looks like some regional theatre (he wears a lime green satin evening dress to it, with, as the Daily Mail would say, his tresses teased into beachy waves).

The good-naturedness gets a bit wearisome. While the world is going to hell it’s pleasant to watch someone living his best life without a care, but it’s easy to live that life when you’re facilitated at all times. And he even takes in stray kittens! (Though I’m not convinced he didn’t just walk off with someone’s cat. Maybe that’s the point? That any owner would have just laughed wryly and let it go.) 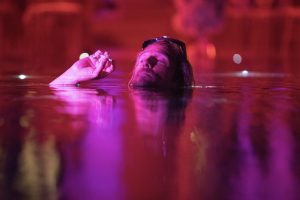 I thoroughly enjoyed The Beach Bum, though 90 minutes of Moondog’s life (and his matching floral shorts ‘n’ shirts combos) were enough for me. Luckily it’s not a film that hangs around.

You’d have to be a surly monster, or someone with their own Moondog, not to fall for its charms  – though it won’t be a film that plays on your mind unless you want to try Lingerie’s amazing Jamaican weed, so rare it only grows in one Jamaican pond.

I saw this yesterday and even now, without looking at my notes, I’m struggling to say what, if anything, actually happened. It’s telling that the bits I remember all involved someone else: Minnie or Lingerie.

The ending is a blaze of glory, proving you can achieve your goals and still stay true to yourself, especially if you’re rich.. Moondog himself sums up the film: “I just wanna have a good time until this shit’s over”, and you probably will.

in the US? rent / buy on digital / dvd / blu-ray from amazon.com

Watch the trailer for The Beach Bum now: