You are here: Home / Film Reviews / The Aeronauts – kids’ review! 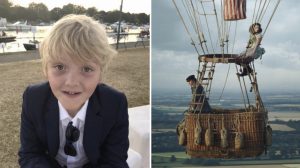 The Aeronauts is set in 1862 in England when Queen Victoria rules, and it’s amazing to think that in 100 years’ time people would be walking on the moon.

A balloonist called Amelia Wren (Felicity Jones) and a scientist called James Glaisher (Eddie Redmayne) go up in her balloon, and break the world altitude record.

She is brave and gets things done, but he just wants to stick to his plan.

He’s trying to do experiments to help him with weather forecasts and the men at the Royal Society should have treated him more seriously – I wanted him to do well to prove them all wrong.

There are two really good animal jokes – SPOILER ALERT! – first as the balloon takes off and everyone is watching and waving them off, she asks James to hand her her little dog. James is annoyed she’s brought the dog but he hands it over… and she throws it out of the basket. My mum grabbed me and shrieked. I guessed it would have a parachute though I was worried the parachute wouldn’t open but it did and THE DOG WAS FINE. 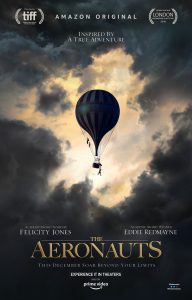 James also has pigeons to take his results back to the Royal Society in case he and Amelia die trying to beat the record. But they go so high that when he gets out the last pigeon and throws it over the side to fly away – SPOILER ALERT! – it’s already dead and falls in a straight line.

The Aeronauts is a really good film. The story is really interesting and Eddie Redmayne and Felicity Jones are really good together.

The best stunt is when Amelia climbs up the side of the balloon to the top, though it’s not that exciting because you know they’ll survive. That’s how movies work. In Ad Astra it’s a surprise when some people die, because it’s not like other movies.

I did feel Amelia and James were in danger though – how are they going to get down when they’re going higher and higher? It was really impressive that they got that high, balloons today are bigger but don’t go as high I think. And at the end when they cut the basket off as it’s too heavy, and they’re holding on to the bottom of the balloon, I thought that was pretty dangerous.

Don’t read my mum’s 4-star review of The Aeronauts!

Watch the trailer for The Aeronauts now: