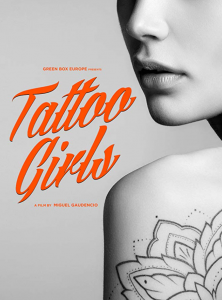 “Life is extremely fragile and only given for a certain amount of time” says a young woman who wants to be a mortuary beautician. It’s artifice to make the dead look as near to their living selves as possible, once that spark has gone, and to make life easier for those left behind.

You could argue it’s the very opposite of tattooing, which has traditionally made people stand out, and sometimes been a way of speaking to the world while saying nothing. And until their move into the mainstream, tattoos were also often seen as discordant and disruptive.

You will probably spend the first few minutes of Tattoo Girls wondering where all the tattoos are – until the film’s calm ambience soothes you into submission. While not immediately gripping, it’s one of those films that reels you in; and tells us a great deal (though not everything) about the women involved without ever speaking directly to them.

The seven women followed by director Miguel Gaudêncio all have tattoos, though their body art isn’t always visible. His message seems to be that their tattoos do not define them, but are part of what makes them who they are.

That’s not to say there are no tattoos on show. Some are inked phrases half-glimpsed under a neckline, or when hair is swept up. Others are mixed designs over an arm, or a large face on a thigh.

Gaudêncio employs a very much hands-off style of filmmaking. We see the women at work, or playing the piano, or chatting with friends, or typing in solitude with a voiceover of their poems and prose.

Acting as bookmarks between each section are aerial shots of the city of Szczecin in Poland where they all live and work. It’s a way of acknowledging interconnections only visible from a distance, and also of highlighting the different areas that make up the whole.

Industry, unshowy residential areas, green spaces, and trees; as the film progresses this aerial explanation expands to include just-visible fountains in public parks, and angles and patterns from buildings that can only ever appreciated from above.

What’s also striking in this from-above cinematography is the combination of beauty and asymmetry. Symmetry creates an easy prettiness, with none of the jarring disruption from things that don’t match. But cities are works in progress, a mix of planning and spontaneity – and so to an extent are bodies, if you make them your canvas.

I don’t have any tattoos, which nowadays probably makes me unusual. I find them fascinating though. Those Instagram-friendly burlesque shots of models with lots of tattoos are gorgeously intriguing – the 1950s ideal of curves, big hair, and satin undies combined with their bold inkings. Those kinds of looks force you to think (until they become mainstream anyway) and create dissonance within our narrow ideas of beauty and its promotion.

It’s interesting that so many of the women in Tattoo Girls have jobs that could be seen to be caring, and nurturing. It’s a still-useful counterweight to the old stereotype of someone (particularly a woman) with tattoos.

One is a nursery teacher, sweetly cajoling toddlers in her tiny white shorts and stripy top, her tattooed arms simply another picture in a room full of them. A children’s dance teacher takes an enthusiastic group of little girls to a competition, where dressed in identical outfits they sway and dance in time and in formation.

Another is a fashion designer, who still ponders whether she should venture to a more vibrant and fashionable city like Warsaw. Her heavy-duty scissors slowly slice though thick black lace, soon to be laid over dark pink satin for a fashion show evening dress – an impermanent adornment, though her designs for individual clients are personal to them.

Most interesting is – unsurprisingly – that young woman who wants to be a mortuary beautician. It’s an odd choice of career but one she is fervent about, despite the family ructions we hear it causes. She’s lovely, having a heart-to-heart with her best friend in her bedroom: “they have nothing to be proud of, their daughter wants to paint bodies” she says self-deprecatingly but sadly. Her cheery friend is having none of it: “Hey stop crying. We’re sitting here with lots of sweets, hot cocoa. You are a zebra!” she adds referring to her friend’s stripy animal onesie.

In fact most of the peripheral characters are women; to the extent that when a male photographer appears to take photos of the lace dress, he seems like an intruder to us even though he’s their friend.

Tattoo Girls is a gently enveloping film that is far more gripping than it first appears. Beyond the talking, there is background city noise and chatter. The music is gentle, stirring, or melodic, as we wash in and around these women’s lives. The cinematography sometimes has a slightly washed out, aged feel to it, adding a pretty sense of nostalgia to day to day working lives.

The film’s simplicity is at times frustrating. We never really find out why they had tattoos, or how they chose them. We assume they have meaning but that’s not necessarily the case any more, especially as tattoos are now so mainstream and have probably lost all their old connotations of counter-culture or class. (I’d have also loved to see some older women.)

Are they still a message to the world? A sign of belonging to a group? Something personal to them? Or simply a more permanent adornment than make-up or jewellery?

But regardless of those quibbles, director Miguel Gaudêncio has crafted a calmly confident movie, where he simply lets his subjects’ lives speak for themselves, like their tattoos.

Watch the Tattoo Girls trailer below: