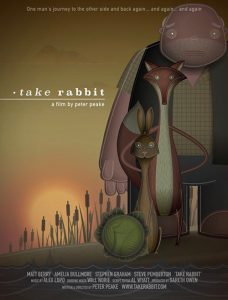 *** Read my interview with Take Rabbit‘s director, the Oscar- and BAFTA-nominated  Peter Peake ***

“You gets what you gives” says the Man as he gradually decides to start interacting with the world once more, ending his self-imposed conversational exile.

It’s a change brought about in the main by a meeting with a talking Liverpudlian cabbage the Man is rowing across a river. The Cabbage encourages the Man to plunge in and involve himself in the relationship dilemmas of his equally chatty previous passengers, Rabbit and Fox.

No man is an island, as the Man says, and sometimes keeping oneself tidily separate is actually harder than living in a messy world.

“That cabbage stirred something inside me,” says the Man (Steve Pemberton) after dropping Cabbage (Stephen Graham) off and heading back the other way, and I don’t think he meant as a result of all that fibre.

There’s a calmness and a restfulness to the animation in Take Rabbit, so much so that I later spent a few minutes rather mesmerised in front of Director Peter Peake’s website watching the Man row his boat back and forth across the river as the waves bobbed around.

It’s beautifully drawn. The colours are softly muted and gentle, but the two animals are all angles and inverted curves. Her nose trembles almost imperceptably, a twitch she can’t shake off.

The subject matter and the dialogue are anything but restful though, as the Man weighs up whether to continue his isolationist stance or embrace the connections, however tricky they might be, of this complex world of ours.

The rowing boat itself is called Enola, which is Alone backwards, and he is literally backwards most of the time as he rows Rabbit, Fox and Cabbage across the water.

Rabbit (Amelia Bullmore, delightfully haughty despite Rabbit’s loquaciousness) and Fox (a rakish Matt Berry) are transported separately; each one describes their now-ended relationship to the Man from their own point of view, putting their own spin on the faults and faultlines that led to their break-up.

But gradually the deliberate muddying of the waters lessens and they each gain some clarity on what really happened: “a woodland Brangelina” Fox describes them as in hindsight, rather wistfully, and Rabbit stops being so jealous of his (admittedly very fine) tail.

The Cabbage knows all sorts, so it’s probably wise in future not to gossip in front of your open fridge (there’s probably a cauliflower ears joke hiding in that salad drawer too, if I was prepared to rummage).

The dialogue sparkles (I watched the film a second time and found even more to enjoy).

Rabbit is funny and scathing of her ex, her complaints tumbling forth from her mouth as if she’s been saving them up just waiting for someone to, if not listen, then simply absorb the sounds. She also claims Fox had “the conversational skills of a jacket potato”; which is given a different resonance when we meet an actual talking vegetable.

There’s a touch of narcissism surrounding Fox, and he’s certainly sly (of course!). He seems practised at engendering sympathy, and far more hurt that a female left him than by the collapse of their relationship.

The embodiment of the description lugubrious (a term I have previously only allowed in relation to John Goodman and Timothy Spall) the Man has made a decision not to get involved in people’s problems. Which sounds like absolving oneself of responsibility for your place in the world, but – and I say this as a nosy person who loves to delve into other people’s relationships under the guise of helping – it makes a lot of sense.

Delving into other people’s relationship woes is particularly tricky and likely to result in both parties teaming up against you at some point (and in Take Rabbit everyone certainly agrees the Man needs a bigger boat). It’s only really worth getting involved if you get some really juicy gossip out of it, not something the Man seems to want.

The ending – without giving it away – is in some ways heroically realistic, and doesn’t pander to what could be described as cartoonish emotions. It’s rather shocking, grimly funny and gleefully rational. Do any of us ever really change? Or is it all lip service and virtue-signalling to how we think the world should be, if only we didn’t keep screwing it up?

Take Rabbit is screening at the Edinburgh International Film Festival (EIFF): the film is up for the McLaren Award, a prize for new British animation, and director Peter Peake is also doing a Q&A. Find out more and book tickets here. EIFF runs 20 June – 1 July 2018.

Watch the Take Rabbit trailer below: