You are here: Home / Film Reviews / Take Every Wave: The Life Of Laird Hamilton 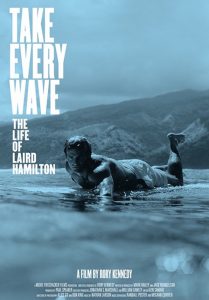 “I found equality in the ocean, that just drove me” says Laird Hamilton, who has overcome a troubled childhood to become the world’s best big wave surfer. “The ocean is where I could hide, get away from the land. That was where the trouble was”.

I know nothing about surfing, bar what I learnt from Chasing Mavericks. Whisper it, I haven’t even seen Point Break (though naturally I’ve told everyone I have). But I tend to be drawn to film topics I would be useless at if I ever attempted them, and which would probably mess up my hair (extreme sports, space travel, dragon slaying).

Laird Hamilton is probably the most famous surfer non-surfers have ever heard of, but he’s never competed professionally. Unhappy at being judged by other people, he also felt his style of big wave surfing didn’t lend itself to how the competitions were run. But his stepfather adds a slightly different perspective: “He doesn’t like to lose”.

In some ways this sums Hamilton up – bypassing anything that doesn’t fit in with an obsessive single-mindedness that has lasted for decades. But at the same time he’s a visionary who drives himself, and his sport, forward through innovation and sheer will.

He’s been married to former volleyball player Gabrielle Reece for 20 years, and though she doesn’t appear until about halfway through Rory Kennedy’s documentary, her voice is an important one. She’s honest about his drive and focus, about how close they have come in the past to divorcing, and about tiptoeing around his moods.

Laird comes across as very likeable, though very much on his own terms. And though this film does look at his relationships and friendships, footage of him taking on these monster waves, whether now or in decades-old footage of sunny shores and beautiful people, is what it’s really all about. The talking heads from the different surfing publications do a good job of setting the scene, and there’s a lot to love and to look at, but we don’t get to dig too deep.

Growing up in Hawaii, Laird got to watch pioneering surfers in the waves. Sam George, Surfer magazine editor, talks about the 1950s and 60s surfing counter culture, with life led by a timetable of tides rather than factories and alarm clocks; and Laird’s mum Joann moved to Hawaii for a life of freedom.

The best surfers were almost worshipped, so it makes sense when Bill Hamilton laughingly admits that surfing on his board, he copied a Sermon On The Mount picture of Jesus with arms outstretched. On the beach Bill spotted and befriended the young Laird, and he was soon dating Joann, marrying her when she was in her early 20s and Bill was 17.

It was a huge step for Bill becoming a stepfather at such a young age, and he certainly had a temper, lashing out at his stepson (something which is treated in something of a jokey fashion – by contrast the now 50-something Laird is shown helping his own daughter with her homework). Meanwhile at school Laird was picked on as one of the few white children there.

Despite the surface glamour and the freedom, making a long-term living from surfing clearly isn’t easy. Laird has tried acting and modelling, but “my neck was too big to fit in any dress shirts” and he refused to go to castings. Sponsorships and his technical innovations presumably help now.

His restlessness seems to drive his innovations and strategies, admitting that “a lot of ideas come out of boredom”. He doesn’t just surf the same waves but finds new ways of getting to the monsters: tow-in surfing, where surfers are towed out by an inflatable boat to much bigger waves than they could ever paddle out to; and in the last few years the foilboard, where the surfer flies above the water so there’s no surface drag (and which most resembles an ironing board on a pogo stick). It’s a combination of necessity being the mother of invention, and make do and mend (in all things – at one point he holds an ankle injury together with silver tape).

That drive has also pushed him to take on some unusual challenges, often with fellow big wave surfer Buzzy Kerbox. That time they paddled across the English Channel (the first people to do so): “we didn’t have any idea it’s the busiest shipping channel in the world…” And when they decided to go from Corsica to the island of Elba, but mixed up ordinary miles and nautical miles so paddling took them nine hours, after which they had to spend several days getting back to Corsica with their boards and Buzzy’s credit card, but no shoes.

Taking a supposedly unsurfable wave at Teahupoo off Tahiti in 2000 (“the wave of heaviest consequence” his stepfather rather brilliantly calls it), in Laird’s head there was a battle going on, a “talk between halo and horns”. But he was successful (surfing that wave “redefined what rideable was”), and his triumph reminded everyone of his stature within the sport.

His training schedule, even now, is relentless: balancing on golf balls, developing mindfulness, deep water pool training. But his is a career that is destroying his body, even if the damage is hidden underneath tanned skin and rippling muscles. Laird has suffered repeated shoulder and foot injuries, and has arthritis in one hip.

The film has a linear structure, which makes it easy to follow; but it is probably too long if you’re not a die-hard surfing fan, and I’d have liked more probing into his relationships with friends and fellow surfers. They do seem to have cut him a whole lot of slack over his determination to do what he wants, regardless of his commitments to other people: the Strapped Crew, made up of Laird, Buzzy and Darrick Doerner, brought the tow-in method to wider notice when they filmed themselves using it to reach the monster waves at Pe’ahi – later the company folded when Laird moved on.

The surfing footage is extraordinarily exhilarating. The final scene with Hamilton riding a huge wave in a shot that goes on and on and on is simply breathtaking. But while he’s still surfing and innovating in his mid 50s, many of his contemporaries have gone: “you start to get to 50, 60 and there’s like… me and Terry [Chung, fellow big wave surfer]” he says, poignantly. And you wonder if what it yet to come is actually going to be more interesting.