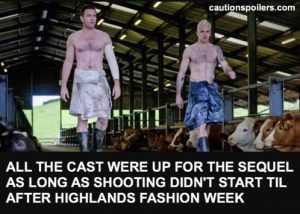 “Skanky nostalgia” is how my friend affectionately described the oddly-named T2: Trainspotting, after a screening filled with fellow 40-somethings. In fact when you see it, listen out when the lights go up for the collective “ooohhh” as we oldies stretch our stiffened limbs up out of our seats.

Director Danny Boyle has, though, managed to stay just the right side of that nostalgia – without pushing us into a sentimental mire or simply retreading the original film for the 21st century. There are a few flashbacks (and some really sweet old-style films of the protagonists when they were children) but just enough to reference the first instalment without making us pine for it.

Characters have moved on in some way, often on trajectories that map perfectly to how society has changed since 1996. (And therein lies its darkness.)

Mark Renton (Ewan McGregor) is back in Edinburgh but it’s hardly a meeting of middle class accountants with thickened waists, lovely children and school fees woes as is so often typical of 20-years-later sequels. Nor, after the events of the first film, is it a joyous reunion between battered, bruised but still surviving old friends.

Unsurprisingly nearly everyone is still furious over Renton’s double cross all those years ago when he ran off with the money from the drugs deal – Mark’s first run in with Simon/Sick Boy (Jonny Lee Miller) in a pub results in him being beaten up with bottles and pool cues.

Begbie (Robert Carlyle) has been in prison for 20 years and is desperate to get out. He’s reduced to getting a cellmate to stab him so he can be transferred to the prison infirmary from where he aims to escape. He’s still a psychopath, and makes it his mission to track Renton down.

Terrifying and menacing though Begbie still is, he also now, with his neatly-clipped grey hair and moustache, looks like Station Officer Steele from Fireman Sam and wears argyle jumpers. And our reaction to his still-scary craziness is slightly tempered by his very obvious impotence (in every sense). In this new world his son goes off to college to study hotel management, while sex is a disaster.

Sick Boy is off heroin but on coke. He has a sex business with beautiful Bulgarian girlfriend Veronika (the wonderful Anjela Nedyalkova). Veronika is a peach: funny, bright, friendly, and completely matter of fact as she manoeuvres the huge strap-on for Simon to covertly film her fucking various upstanding members of Edinburgh’s middle class, before he blackmails them. Next they want to set up a sauna but with no money to do so they decide to apply for an EU business loan of £100,000. Welcome to the brave new world of state-sponsored vice.

Danny / Spud (Ewen Bremner) has a son but has split from wife Gail and it is his downward spiral that results in the biggest yuck moment as measured by audience “urgh”s, though it doesn’t compare to the toilet incident of the original.

Edinburgh has mostly moved on but not totally, and its 21st century highlights are familiar (though with the speed things are going, it won’t be long before they too fill us with nostalgia). There are selfies with snapchat filters; looking at old footage, Renton makes exactly the same observations we all do, primarily: “nobody was fat back then!”; and the tight t-shirted tartan-clad lovelies welcoming him to Edinburgh when he gets off the plane are all from Eastern Europe. But then Sick Boy, in his auntie’s almost-empty decrepit pub, points out bitterly that “the great wave of gentrification has yet to engulf us”.

As in life, there are many plot threads. Begbie’s revenge, (what a great title for a pulp novella that would be), and Simon and Veronika’s brothel (and while we’re at it wouldn’t Veronika’s Brothel be an equally well-named mid-90s grunge band) are just two.

For the audience it’s more about catching up with old friends, and laughing (look out for the off-the-cuff Battle of the Boyne singalong in the lodge and the resulting lesson in guessing bank card pin numbers). The cast is utterly engaging, and clearly delighted to be back.

As are their characters. Even after 20 years, 15 of them married, Renton seems to come alive when the shit (not literally this time) hits the fan, clinging on to the roof of an innocent driver’s 4×4 careering through an underground car park to escape a furious Begbie.

Jonny Lee Miller and Ewan McGregor look well-preserved after years in Hollywood. McGregor’s healthy onscreen sheen is explainable as Renton has been living a settled life away from old influences. Sick Boy, though, is still an addict and still living in the city’s underbelly. In fact Sick Boy looks so good he should vie with fat and fluffy Streetcat Bob for most misnamed film character of the past 12 months.

The film is hugely funny, and feels realistic. It’s not so physically gross as the first one, though it has its own bleakness. It won’t hurt if you have seen, and can actually remember, the original.

More women might have made it a more rounded experience; Shirley Henderson as Gail and Kelly Macdonald as Diane are hardly in the film, leaving poor Veronika to hold her own against all the guys (she does a sterling job though – Nedyalkova is a stand-out).

Forty-plus is key mid-life crisis territory for the characters and for us; we’re a generation which prides itself on fitting in with the Millennials, and even with that group who are younger than Millennials but we’re not sure what to call them (M2?). Until our children start asking us about the olden days and we start tweeting childhood-era pictures of those sweets that looked like cigarettes, or our first 90s-era mobile phone, the non-skanky side of nostalgia.

T2:Trainspotting was always going to include a wallow in the past (however grim it was) for us and the characters; how could it not? You have to reference how you got to where you are, and what you’re doing now.