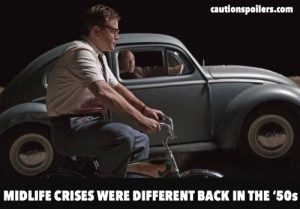 Like the name of Suburbicon itself, the 1950s housing development where this story is set, this is a film made up of two separate elements that just don’t fit together.

The 1950s period details are fun: the opening credits’ living breathing Suburbicon sales brochure, and the bold-patterned office fixtures and fittings, more than the oft-used 1950s wide skirts and curlers. But tonally Suburbicon is all over the place, despite its mostly fixed settings.

There were times I was certainly kept on my toes, though less so by the well-signposted thriller elements. Spotting two similar-looking actresses playing sisters Rose and Maggie, for the first half hour I was trying to work out who was playing whom, convinced it must be yet another pair of actors I constantly mix up, before eventually realising they are both Julianne Moore.

A large, newish estate filled with identical houses and open lawns, it’s a place filled, we are told during that come-alive brochure at the beginning, with diverse families – diverse meaning white people from different, far-flung states.

So when the African-American Mayers family moves in, the shockwaves ripple quickly through the town – shockwaves which soon turn into an ugly racist mob, only temporarily appeased by the Suburbicon Housing Committee’s offer to build a solid fence round their house so no one need see them.

Rose is acerbic, and doesn’t let the presence of two unpredictable violent criminals in her kitchen get in the way of making clear exactly how she feels about her husband Gardner, who was driving when they had the accident that left her in a wheelchair: “yeah, it all worked out just fine” she says with understandable bitterness, as her husband points out that no one died.

Unfortunately Rose can’t survive this, and soon after her funeral Nicky’s glamorous Aunt Maggie is moving in, taking over not only her sister’s role as a mother but also her pearls and pinny.

Maggie is initially set up as the forward-thinking progressive; when the Mayers move in next door and everyone else, including Rose, is either blatantly racist or quietly worrying about house prices, Maggie points out a particular white family in the town has already done plenty to suppress real estate values.

And later on I felt a touch of sympathy as she sees her newly-acquired, perfect family life crumble. But is Maggie a bit of a chancer leaping at the opportunity to have a family and settled home life of her own, or a sociopath in a pinny?

Unfortunately soon it turns out that Gardner may have got himself tangled up in something far more sinister, as carefully laid plans start tumbling like dominoes; and caught up in their own drama, Gardner and Maggie are uninterested in what is happening next door.

The treatment of the Mayers by their new community is an awful watch, though in a different kind of movie it would be a necessary one. Large crowds of middle class residents stand menacingly outside, sometimes singing, often shouting and banging drums, while the dignified Mrs Mayers (Karimah Westbrook) hangs out laundry or the family stays quietly indoors.

But the two very different tones for the almost comedic (if very bloody) antics unfolding at the Lodges, and the threatening racism outside the Mayers’ property, simply don’t work together.

There are a few entertaining performances. Noah Jupe is very impressive as Nicky, the scared little boy whose whole world is crushed when his mum dies, then crushed again even before the body count starts to rise.

And Oscar Isaac’s Bud Cooper, the insurance claims investigator (“what you might call a professional sceptic”), is a breath of fresh air when he appears half way through.

Gardner’s life insurance claim for Rose has more red flags than a communist protest march, and Bud leads poor nervous Maggie a merry dance, making clear he doesn’t believe their story while at the same time reassuring her over his firm’s good intentions towards them. “I loved my sister and I love her son!” says Maggie, and he responds quick as a flash “You love her husband too?” Because for Bud “it all boils down to one word”, and that word is “coincidence”.

The Mayers are barely seen and their story is reduced to mere background, the dignified but almost invisible black family. I don’t think Mr Mayers utters more than a word or two if that, while Mrs Mayers goes about her business, thwarted at every turn by locals who won’t even let her shop at the town supermarket.

Their son Andy (Tony Espinosa) becomes friends with Nicky, and the boys’ relationship has that believable quality of two kids who just get on with things whatever hideousness they’re facing. When they first meet, both are dressed almost identically in stripy t-shirts and jeans as they bond over baseball. And when Nicky loses his mother, his friend simply gives him a grass snake and a jar of bugs to feed it; later they communicate with two tin cans connected with a length of string, as a well-dressed mob bays below their bedroom windows.

Rose and Maggie’s brother, Nicky’s Uncle Mitch (Gary Basaraba), is engaging though larger than life. Topping and tailing the film, he’s absent for the rest of it, though when he does appear he’s the most reassuring presence for Nicky: both loving towards the boy, and swearing constantly.

Without the Mayers’ partly-told story, and the misfiring comic weirdness, the goings on at the Lodges would be an entertaining 1950s melodrama updated for the age of irony; from the brightly coloured fixtures and fittings to the jarring music which appears at times of peril. Instead this is an uncomfortable watch, where all the seams are visible, despite its classy cast.

buy Suburbicon on dvd or blu-ray from amazon.com